Being able to do more with less, in the processor space, allows both the task to be completed quicker and often for less power. While the concept of having multiple cores has allowed many programs to be run at once, such as IM, web, compute and so forth, we are all still limited by the fact that a lot of software is still relying on one line of code after another, pegging each software package to once core unless it can exploit a mulithreaded list of operations. This is referred to as the serial part of the software, and is the basis for many early programming classes – getting the software to compile and complete is more important than speed. But the truth is that having a few fast cores helps more than several thousand super slow cores. This is where Instructions Per Clock (IPC) comes in to play.

For the most part, Intel has successfully increased IPC every generation of processor. In most cases, 5-10% with a node change and 5-25% with an architecture change with the most recent large jumps being with the Core architecture and the Sandy Bridge architectures, ushering in new waves of super-fast computational power. As Haswell to Broadwell is a node change with minor silicon updates, we should expect some gain but the main benefit should be efficiency by moving to a smaller node.

For this test we took Intel’s high-end i7 processors from the last four generations and set them to 3.0 GHz and with HyperThreading disabled. As each platform uses DDR3, we set the memory across each to DDR3-1866 with a CAS latency of 9. From a pure cache standpoint, here is how each of the processors performed: 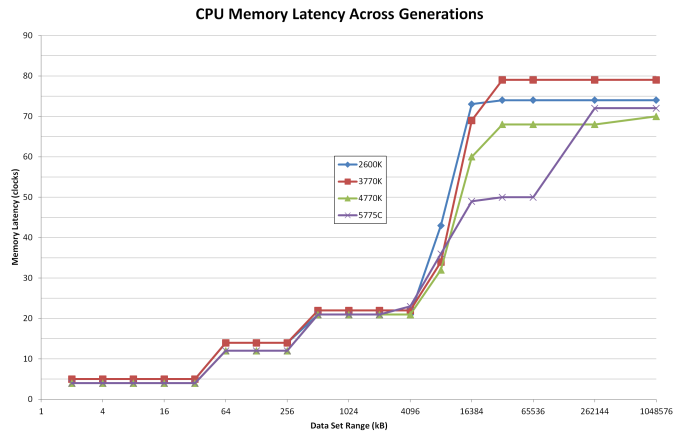 Both Haswell and Broadwell have a small lead through the Level 1 Cache (32kB) and Level 2 Cache (256kB). It all changes from 6MB onwards as a result of the different cache levels between the processors. As the Broadwell based i7-5775C only has 6MB of L3 cache, this seems to effect the 4MB data set range, but between 8MB and 64MB values, the memory latency for Broadwell is substantially lower than any other Intel processor. This comes down to the eDRAM, which sticks around until 128MB.

Most memory accesses happen at lower data set ranges as the system attempts to predict the data needed. When data is not in the L1 cache, it is considered a cache miss and looks for the data in L2. When not in L2, look in L3. When not in L3, look in eDRAM/DDR3. From this perspective, the Broadwell based processors should have a slight advantage when it comes to large amounts of data accesses. Based on our previous testing, this means integrated graphics or high intensity CPU/DRAM workloads such as databases or matrix operations.

*When this section was published initially, the timed benchmarks (those that rely on time rather than score) were caluclated incorrectly. The text has been updated to reflect the new calculations.

Removing WinRAR as a benchmark that obviously benefits from the eDRAM, we get an interesting look at how each generation has evolved over time. Taking Sandy Bridge (i7-2600K) as the base, we get the following: 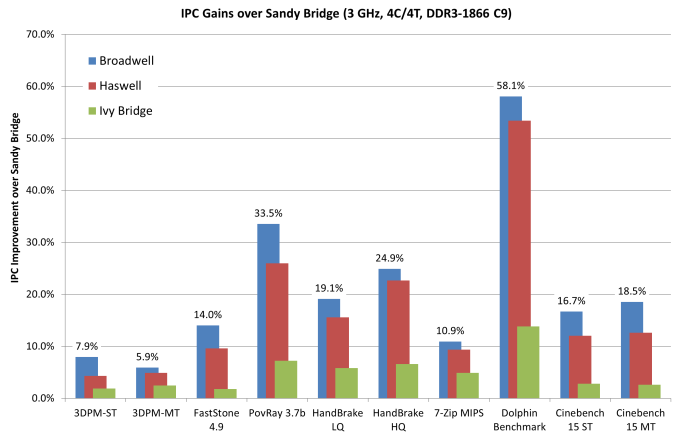 As we can see, performance gains are everywhere although the total benefit is highly dependent on the benchmark in question. Cinebench in single threaded mode for example gives a 16.7% gain from Sandy Bridge to Broadwell, however Dolphin which is also single threaded gets a 58.1% improvement. Overall, a move from Sandy Bridge to Broadwell from an IPC perspective gives an average ~21% improvement. That is an increase in pure, raw throughput before considering frequency or any differentiator in core counts.

If we adjust this graph to show generation to generation improvement: 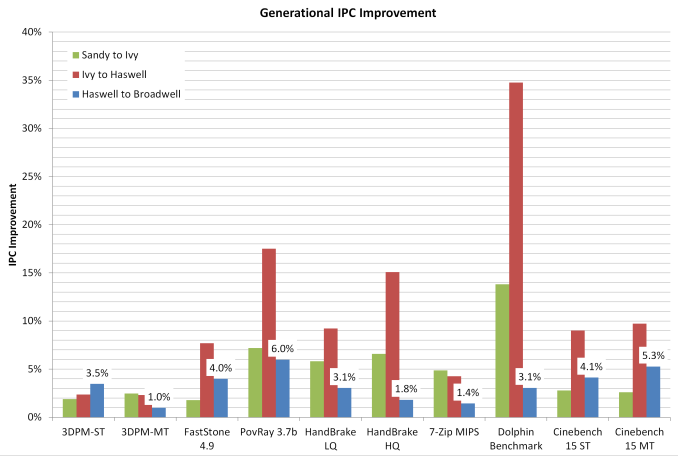 This graph shows something a little bit different. From these numbers:

Thus in a like for like environment, when eDRAM is not explicitly a driver for performance, Broadwell gives a 3.3% gain over Haswell. That’s a take home message worth considering, but it also affords the difference in performance between an architecture update and a node change.

Cycling back to our WinRAR test, things look a little different. Ivy Bridge to Haswell gives only a 3.2% difference, but the eDRAM in Broadwell slaps on another 23.8% performance increase, dropping the benchmark from 76.65 seconds to 63.91 seconds. When eDRAM counts, it counts a lot.