Starting with voltages, with the latest update to GPU-Z (0.8.4) we now have a basic idea of what the R9 Fury series’ voltages are, so let’s take a look.

Meanwhile what’s of much greater interest is the difference between the two R9 Fury cards. The Sapphire Tri-X R9 Fury OC also tops out at 1.212v, indicating that it’s operating in the same voltage range as the reference R9 Fury X, and what we’d expect to see if AMD isn’t doing any power binning and just selecting Fiji chips for R9 Fury based on yields and attainable clockspeeds. The ASUS card on the other hand reports a notably lower voltage, topping out at 1.169v, 43mv below the Sapphire card.

This is an unexpected, though not unreasonable finding. We know that AMD has been carefully testing chips and more closely assigning operating voltages to them based on what the chips actually need in order to improve their energy efficiency. As a result it looks like the ASUS card ended up with a better chip as part of the overall random distribution of chips, i.e. the chip lottery. We’ll revisit this point in a little bit, but for now it’s something to keep in mind.

Moving on, let’s take a look at average clockspeeds.

All of these cards are well-cooled, and as a result they have no trouble sustaining their rated clockspeeds when running our benchmark suite games. This is the case even for the ASUS card, which has a much lower power limit, as evidenced by the lower average clockspeed under FurMark. 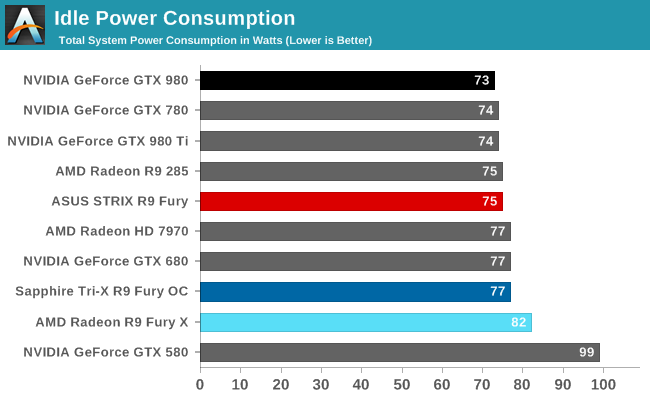 Shifting gears to power consumption, we knew at the time of the R9 Fury X that it was paying a slight idle power penalty as a result of its closed loop liquid cooler, and now we have a better idea of just what that penalty is. It essentially costs AMD another 5W at the wall to run the R9 Fury X’s pump, which means that the air-cooled R9 Fury’s idle power consumption is right in line with other air cooled cards. The fact that the ASUS and Sapphire cards are consistently 2W apart was a bit surprising, though likely a consequence of their difference PCB designs. 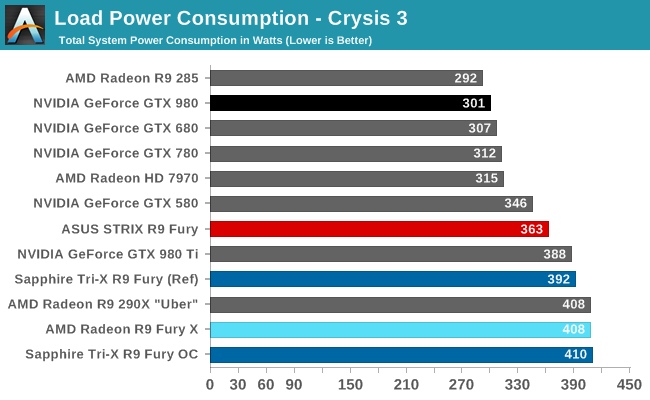 Load power consumption on the other hand is a poignant reminder that the R9 Fury is still a Fiji card, and that AMD can’t match the energy efficiency of NVIDIA’s Maxwell cards even under better circumstances. The Fury cards have a several percent performance lead over the GTX 980, but their power consumption in turn is much, much higher. The difference is between 62W and 109W at the wall, closer to large, power-hungry cards like the R9 Fury X and GTX 980 Ti than the smaller GTX 980 that the R9 Fury is competing with.

Overall the power gap is influenced by several factors. The R9 Fury cards run hotter than R9 Fury X, leading to more leakage. On the other hand disabling some CUs saves power, offsetting the increased leakage. But at the end of the day the R9 Fury is meant to be a 275W TBP card, just like the R9 Fury X, and that’s what we see here.

With that said, the difference between the ASUS and Sapphire cards is extremely surprising. The ASUS card has a lower power limit, but with the card sustaining 1000MHz under Crysis 3, that’s not what’s going on here. Rather we seem to be seeing the result of random chip variation quite possibly combined with ASUS’s custom PCB. Keep in mind what we said earlier about voltages, the ASUS card operates at a lower voltage than the Sapphire card, and as a result it has an advantage going into our power testing. Still, I would normally not expect a 43mv difference to lead to such significant savings.

This is a particular case where I’m curious what we’d find if we tested multiple ASUS cards, rather than looking at a sample size of 1. Would other ASUS cards have worse chips and draw more power? We’d expect so, but there may still be an advantage from ASUS’s PCB design and BIOS that need to be accounted for. At the very least it helps to close the efficiency gap between the R9 Fury and GTX 980, but it’s still not going to be enough.

Finally, since Sapphire also sent over the stock BIOS for their card we quickly tested that as well. Power consumption is down slightly thanks to slightly lower clockspeeds coupled with a lower maximum voltage of 1.188v. Still, even configured as a stock card, the ASUS card is well ahead in energy efficiency. 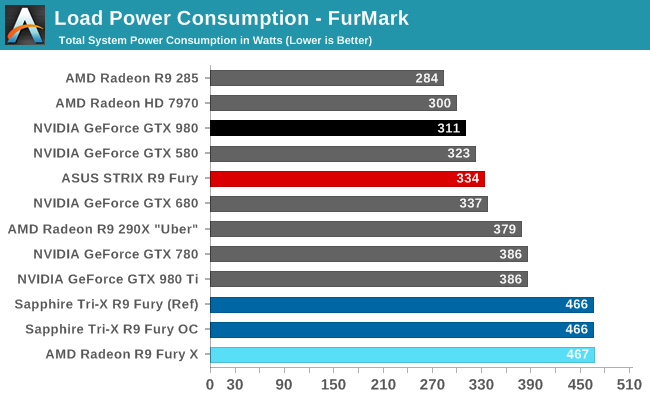 As for FurMark, we get the results more or less exactly what we were expecting. The Sapphire card with its AMD reference PCB and the high power delivery limits that entails throttles very little on FurMark, and as a result power consumption at the wall is quite high. On the other hand the ASUS card has its much lower default power limit, resulting in much heavier throttling under FurMark and keeping maximum power consumption down as well.

The end result is that the Sapphire card has a much wider range than the ASUS card, and it also indicates that the ASUS card’s power limit is likely not very far above what it takes to sustain 1000MHz under most games. The ASUS card will likely need more power to avoid power throttling if overclocked. 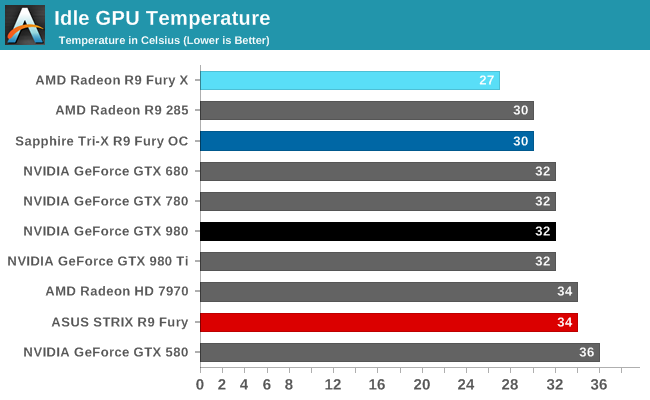 Moving on to idle temperatures, both R9 Fury cards fare relatively well here. The fact that they have no active cooling due to their zero fan speed idle technologies means that they run a bit warmer at idle, but it’s nothing significant. 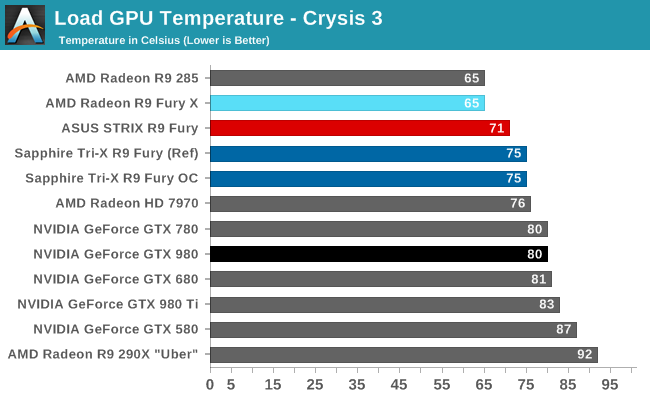 Crysis 3 temperatures meanwhile are in-line with what these cards are designed for. The Sapphire card is designed to run at up to 75C, and that’s exactly what happens here. The ASUS card on the other hand is a bit more aggressive with its fan early on, leading to it topping out at 71C. Both, as expected, are warmer than the R9 Fury X, which is not a major problem, but it does contribute to the lower energy efficiency we’ve been seeing, particularly for the Sapphire card. 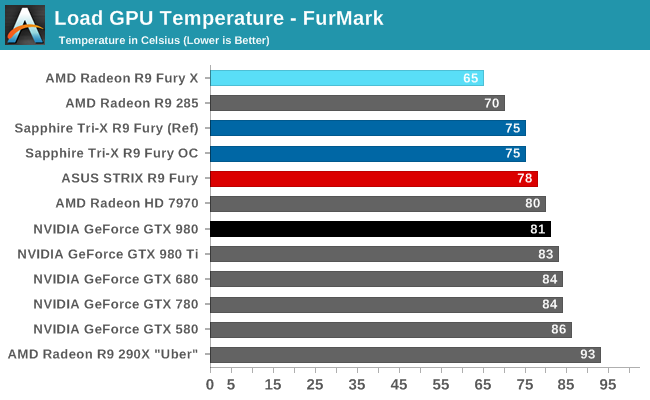 FurMark on the other hand changes things slightly. The Sapphire card holds at 75C and ramps up its fan, while the ASUS card is already operating at its first fan speed limit, and as a result is allowed to increase in temperature instead. What’s holding back the ASUS card at this point and preventing it from getting warmer yet is its power limit; the card can only generate enough heat to get up to 78C with its fans running at their first limit. 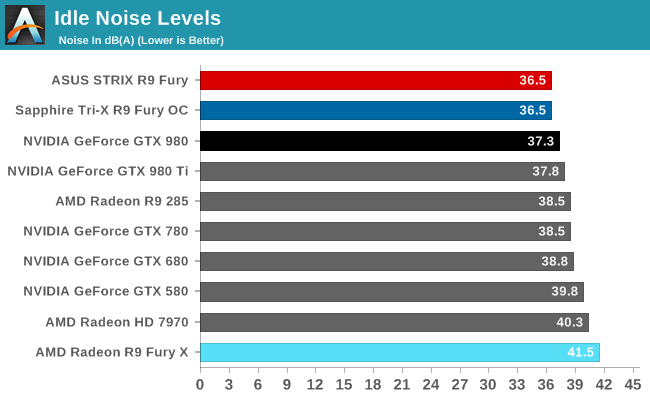 Last but not least, we have our noise measurements, starting with idle noise. The Sapphire and ASUS cards both feature zero fan speed idle technology, which means neither card is running their fans here. As a result the cards are outright silent. What we end up measuring is the background noise, mainly the fans and pumps of our CPU’s closed loop liquid cooler. At this point zero fan speed idle technology is not cutting edge, but it is never the less impressive. High-end HTPC users, or just users looking for a very quiet card at idle should be very happy with either card. 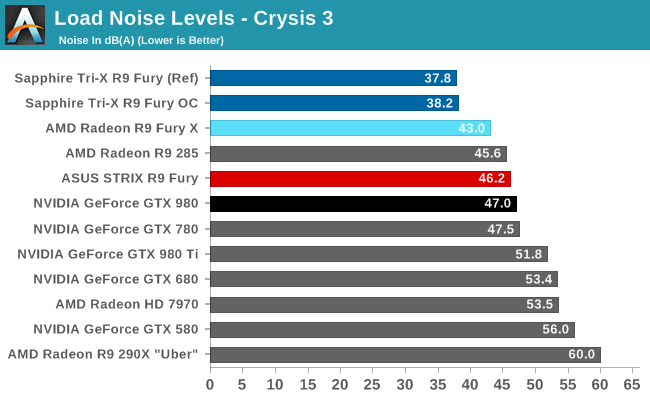 When it came time to run our load noise testing we were expecting good things from both cards, but the results from the Sapphire Tri-X have completely blown our expectations. With sub-40dB(A) noise levels we ended up running our load noise test three different times in order to make sure there wasn’t an error in our testing methodology. There wasn’t.

What we have here then is the quietest high power air cooled card we have ever tested. In its OC configuration the Sapphire Tri-X card tops out at 38.2dB under Crysis 3, less than 2dB(A) above our noise floor and nearly 5dB quieter than the quiet R9 Fury X. Switching to its reference configuration drives noise levels down even further, to just 37.8dB(A). To put that in perspective, the Sapphire Tri-X under a gaming workload is as loud as the GTX 980 Ti is at idle. Simply put, these results are amazing.

In going over the design of Sapphire’s card there is no doubt that this is the product of several factors – not the least of which is the massive heatsink – but going back to what we said earlier about the short PCB, we’re left to wonder if that didn’t have a significant impact. By being able to blow hot air straight back (or rather, straight up), the card reduces the amount of airflow and noise being reflected against the back of the card, but it also offers a more direct cooling route that in principle reduces the amount of work the fans need to do. In any case we’ve seen Sapphire’s Tri-X cards do well before, but at 38dB(A) this is a new high water mark that is going to be difficult to beat.

Which on that note, puts the ASUS card in an awkward position. Compared to just about anything else, 46.2dB would be doing well for an open air card. But at an 8dB(A) difference between it and the Sapphire card, the difference is night and day. ASUS has to run their fans so much faster that they just can’t match what Sapphire has done. It’s a solid card, but when it comes to acoustic testing it has the misfortune of going up against some very capable competition. 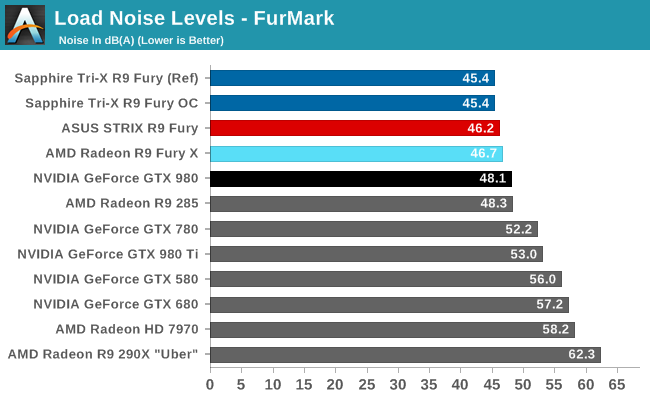 Finally we have our noise levels under FurMark. What’s interesting here is that with the ASUS card still running at its first maximum fan speed (44%), it doesn’t get any noisier under FurMark than it does Crysis 3. The Sapphire card on the other hand does need to ramp up its fans significantly to handle the extra heat. None the less the Sapphire card still ends up being a bit quieter, topping out at 45.4dB. And when taking into consideration the significant difference in power limits between the two cards, it’s clear that the Sapphire card is remaining quieter while performing a great deal more work.