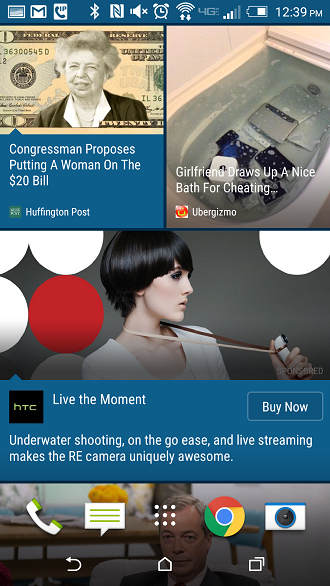 Today HTC has announced a pilot program of sorts for the display of native ads within BlinkFeed, their news and content aggregation application. Since Blinkfeed displays right on a user's app launcher, it's a natural place for HTC to try and put advertising, although users may not feel as enthusiastic about the changes as HTC does.

According to HTC's blog post about the changes, the display of native ads in BlinkFeed will initially be limited to users in the United States, the United Kingdom, Germany, Taiwan, and China. The promotions will be for sponsored apps from Yahoo, Twitter, and Appia, as well as HTC's own products. HTC will be providing an option to opt-out of these advertisements, and with this being a pilot program there's no indication if or when it will ever make its way to other markets.