As with just about everything these days, display matters quite a bit. In a lot of ways, the wearable segment has display requirements similar to the smartphone space. However, unlike the smartphone space it isn’t necessarily critical to have the highest possible resolution, and it isn’t necessarily crucial to have perfect color calibration as in most cases wearables won’t be used for color-critical applications.

In the interest of addressing this, for the near-term we’ll continue to use the standard smartphone workflow, but I hope to expand the testing done here as wearables develop. For now, we’ll continue to do the standard brightness and accuracy testing, but I’ve removed the grayscale test as it strongly emphasizes gamma accuracy. Although it is important to not have obscenely incorrect gamma curves, wearables generally have to prioritize readability over dynamic range, which means that near-black colors would be brightened to try and overcome background reflectance. Similarly, we won’t be placing dE2000 average error in our Bench comparison tool or in graphs, as something like the Apple Watch cannot have controlled display brightness.

As a result, we can’t really be 100% sure that gamma tests and other tests of luminance are actually accurate when automatic brightness means that any inconsistency in light to the sensor will affect display brightness, which will strongly affect dE2000 results. 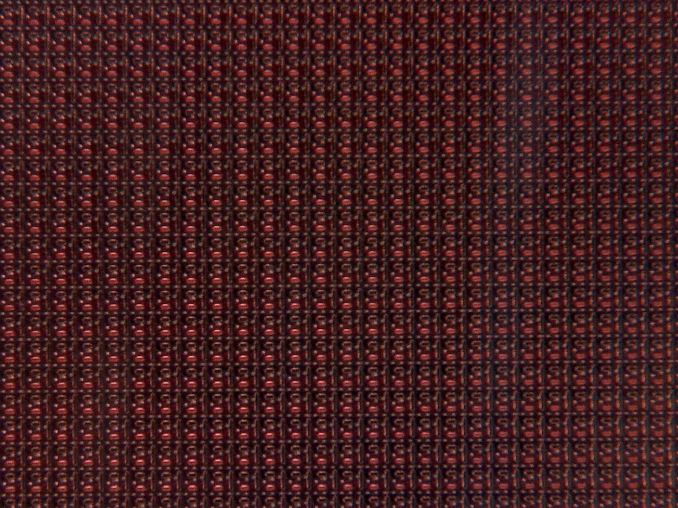 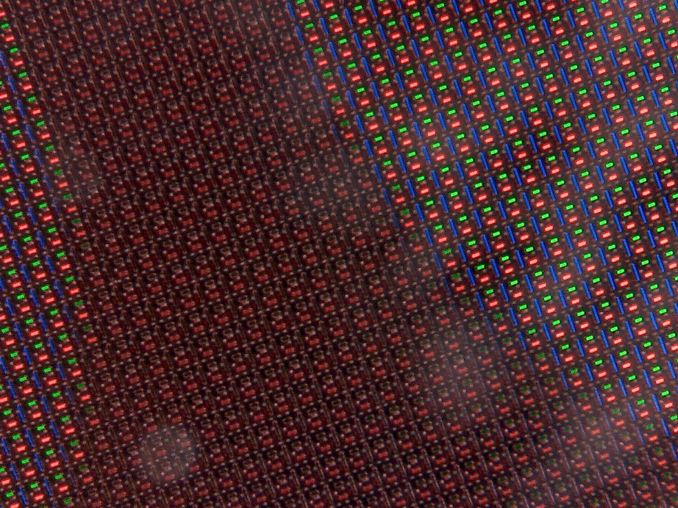 In the case of the Apple Watch, the display is interesting because this represents the first AMOLED display to ever be used in an Apple product. As far as I can tell, this is an LG OLED display with an RGB subpixel arrangement, but it isn’t quite the same as a traditional RGB stripe. I suspect that for the near future we will continue to see the use of this subpixel arrangement as the resolution of the Apple Watch doesn’t really allow for a PenTile layout. Given the current state of AMOLED (as evidenced by the Galaxy S6) I believe it is effectively the future of mobile displays, and it seems that whoever makes these decisions at Apple agrees as well. 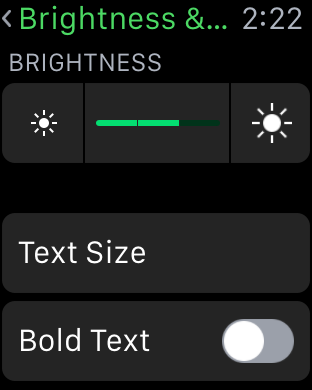 As I mentioned in the start of this section, the Apple Watch also doesn’t have any way of manually setting brightness. You get approximately three choices of auto brightness algorithms, which bias the brightness curve of the display appropriately.

There’s also the issue of reflectance, which could be a problem given that the two higher-end models use a sapphire crystal glass on the display instead of traditional hardened glass. I did notice that reflectance is much higher than something like the iPad Air 2, but I never really felt like the reflections completely washed out the display. The reflections also indicate that the watch has a properly laminated display, without issues involving index of refraction mismatch. However, if people are worried about outdoor visibility Apple Watch Sport should be better given the use of more common aluminosilicate glass. I’m not sure if Apple has actually loaded different auto brightness algorithms for the Apple Watch/Watch Edition compared to the Watch Sport to try and compensate for this though, and I suspect such a change would be difficult to test for as well.

Although reflectance is one aspect of outdoor visibility, the other is display brightness. This is probably the only aspect of the Apple Watch where I can get consistent and repeatable results. Unfortunately, given that we haven’t actually done any other full-featured wearable reviews I’ll have to reference smartphones to get a good comparison point. As the Apple Watch display is already quite small, we won’t be able to get accurate APL vs brightness readings as it’s impossible to hold the meter in a repeatable position that isolates ambient light while also holding an LED to the display.

At any rate, the Apple Watch gets respectably bright at around 460-470 nits, although not quite the ridiculous 600 nits that the Galaxy S6 can achieve. At this full white display, I recorded a color temperature of 6891K, and 6883K at the ~100 nits that was used for the remainder of display testing. It’s important to keep in mind that these values are only at 100% white, so this isn’t the average color temperature that we normally list in reviews. Of course, this display’s contrast is also infinite, with no visible residual brightness on pure black images. 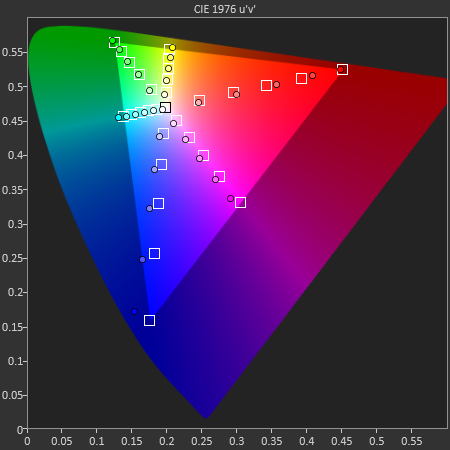 Moving on to the saturation test, we can see that Apple has put a huge amount of effort into calibrating these displays, which is somewhat surprising given that one might expect wearables to not be all that critical when it comes to color accuracy. In my experience, I never actually bothered looking at photos on the watch outside of the messaging app and Twitter. I suspect that this was done in order to make it so that images look the same across all Apple devices, as something would seem “off” in most photos taken by an iPhone 6 if displayed with an Adobe RGB gamut. In this test, the dE2000 average error was 2.33, and as one might guess from the photo above most of the error was concentrated in blue, which appears to have some gamut issues as the native gamut appears to be wider than sRGB but not enough to completely cover sRGB. 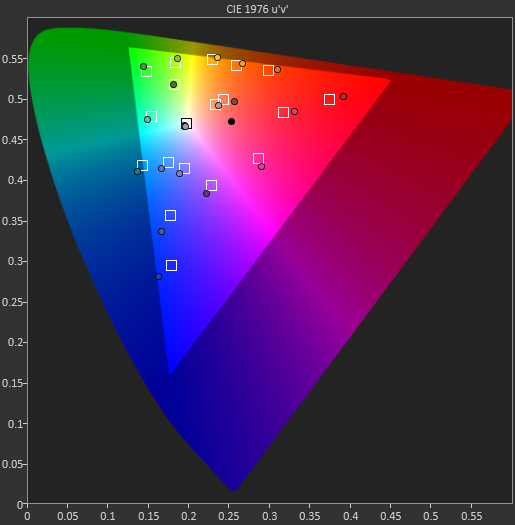 The GretagMacbeth ColorChecker test reveals a similar surprising level of attention to detail in color calibration. Color accuracy isn’t quite on par with the very best, but given that this is a first generation product I’m really surprised that the display is already receiving this much attention with an average dE2000 error of 2.42. Overall, this means that the display has relatively little perceivable error for sRGB content, which is the standard almost across the board, although wider gamuts like Rec. 2020 or Adobe RGB may one day supplant sRGB.

Overall, I’m impressed with the quality of the display of the Apple Watch. The AMOLED panel could probably reach a 600 nit max with sufficient progression in emitter technology from LGD, but I suspect this will take some time. The calibration is also incredible for a first-generation wearable, and the use of a full RGB subpixel helps to avoid a lot of the aliasing issues that tend to plague PenTile or other RG/BG subpixel arrangements at these relatively low pixel densities.

The reflectance of the sapphire lens on the display is a bit high and could probably benefit from anti-reflective coatings of some sort, but given that I haven’t had to worry about scratching the display thus far it’s probably a fair trade as a screen protector will usually increase reflectance noticeably. It’s also a bit annoying as a reviewer to not have manual brightness settings, but as an end user I never felt the need for manual brightness as the auto brightness algorithm works quite well.

Ultimately the entire user experience around the display in every aspect is well-executed, although there is still room for improvement on the technology side of things.