When you consider something like a tablet, battery life is a crucial part of the complete package. Tablets are not meant to be plugged in for really any of their normal usage. In the case of the Surface 3, it has a 28 Wh battery onboard to power it when not plugged into the wall. That is a fair bit less than the 42 Wh battery that is crammed into the Surface Pro 3, but with a less powerful CPU, and a slightly smaller display, it may be able to compete.

To test battery life, we have several tests and for a device like the Surface 3 we will compare it to a couple of device types. First up, we will compare it against other tablets on our Wi-Fi test, which consists of basic web browsing. Next we can compare to notebook computers with our light test (again, web browsing) to get a feel for how it performs against those devices.

Surface 3 features Connected Standby support, but after a few hours of being asleep it will switch to hibernation. This is the same as the Surface Pro 3, and it helps tremendously with standby times. Although we do not have a test for this, in my time with the device I found that standby times were excellent, which makes sense since the device is actually turning off after a few hours. This does make for a bit longer wakeup the next time you need it, but it is a better result than the device being out of battery.

To enable a level playing field for all of the devices, we set the display brightness to 200 nits for all battery life tests, and disable any adaptive brightness. 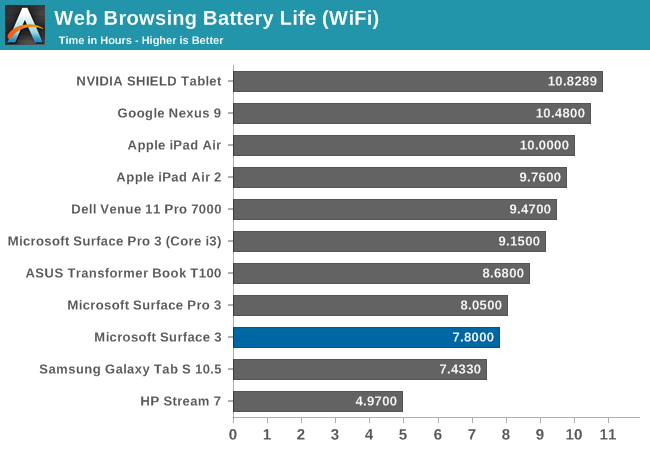 Compared to other tablets, the Surface 3 has pretty poor battery life. On our web browsing test, the Surface 3 came in at just under eight hours. The iPad Air 2 has a similar size battery, but manages almost two hours more battery life in this test. The CPU workload is fairly light in this test, but without a complete breakdown of all of the parts inside it would be difficult to pinpoint exactly what is the issue here. 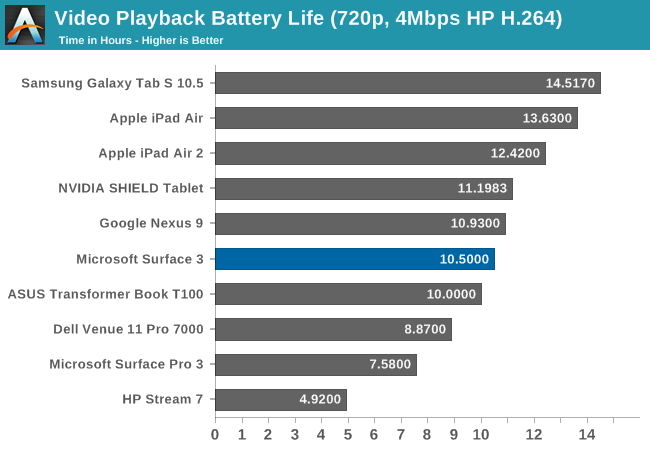 After some discussions with Intel, I discovered that the battery life while playing back video was lower than it should be. Further digging into this issue found that the script being used to log the battery life time affected the tablet video playback test dramatically and resulted in much worse battery life result than was warranted. I have re-run this test several times with no script and was able to achieve 10.5 hours at 200 nits which is a much more respectable result. Further testing determined that this only affected the video playback times, and the other results were unchanged whether the script was running or not.

When this review was first published, we had tested the battery life at 7.72 hours of video playback. Upon subsequent research, it was determined that part of our logging in our battery life test caused an issue for unexpected CPU usage outside of the video decoder, and as a result, we are realigning the result to 10.5 hours. The issue in our test, based on retests of other devices, is currently only limited to the Surface 3 and specifically only to the video playback test.

On the video playback, the Surface 3 stumbles even farther, although the overall battery life is almost identical to the web browsing test. On the video playback many tablets are able to offload the work to hardware. Once again, without being able to check each part of the tablet individually it is not very easy to determine what is causing this weak battery life result.

So compared to tablets, the Surface 3 is about mid-pack in the video playback tests, and below average for web browsing. I hoped for a better result.

We have a different set of tests for notebook computers, so I also ran the Surface 3 through our light workload which is a different browser test. 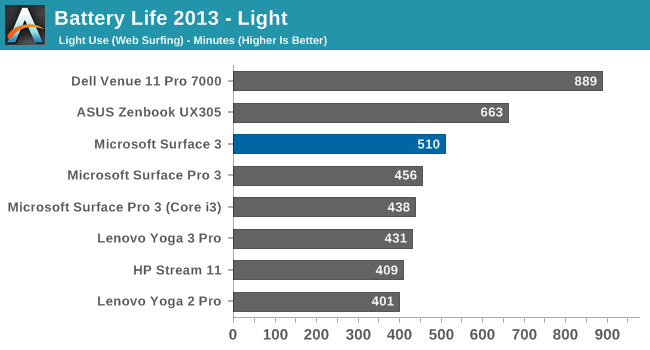 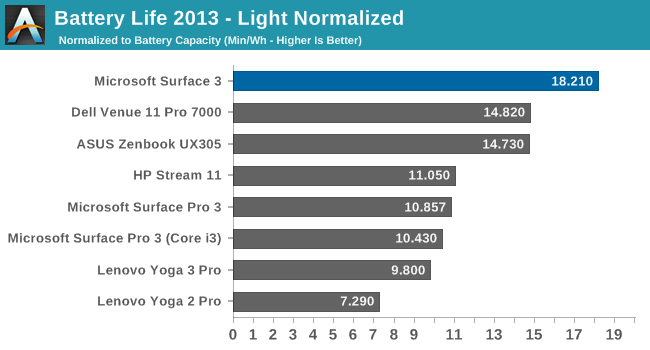 The Surface 3 manages to outperform the Surface Pro 3 here, and at 8.5 hours on our light test, it is a decent result. 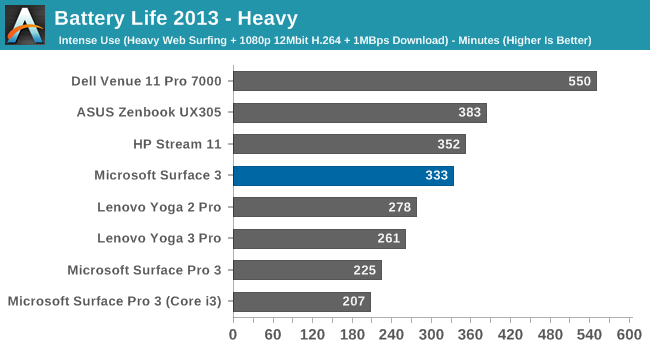 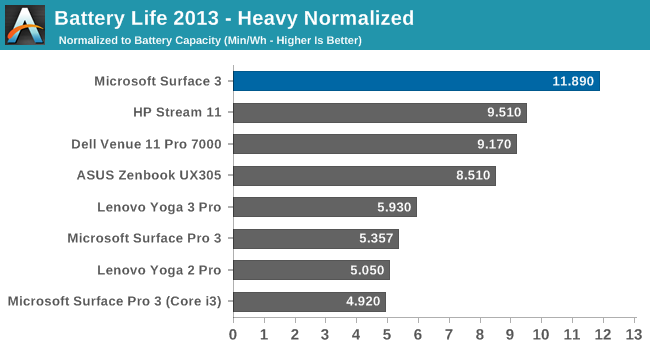 The situation is very similar under our heavy test. The Surface 3 once again outperforms the Surface Pro 3 here, however now it's by quite a bit more than it did under the Light test. Meanwhile compared to the Core M devices, only the Venue 11 remains well in the lead; the UX305's lead is down to 15%. Ultimately with a 2W SDP, the bulk of the Surface 3's power consumption is in the display, so ramping up for our heavy test does not have the same impact on overall power consumption as it does on devices with more powerful SoCs/CPUs. Meanwhile the situation also sees the Surface 3 do well on a normalized basis, well ahead of any other device with respect to the number of minutes of runtime per watt-hour of battery capacity.

The other aspect of mobility is charge time. Although longer battery life would always be a priority, the ability to quickly top up a device can make it a lot more useful in the real world where you are not always away from an outlet.

Charging time is always going to be a function of the battery size and the supplied charger’s ability to fill that battery. In the case of the Surface 3, Microsoft has shipped it with just a 13 watt charger, and when it is charging, only about half of that is available to the battery with the rest designated to power the system. 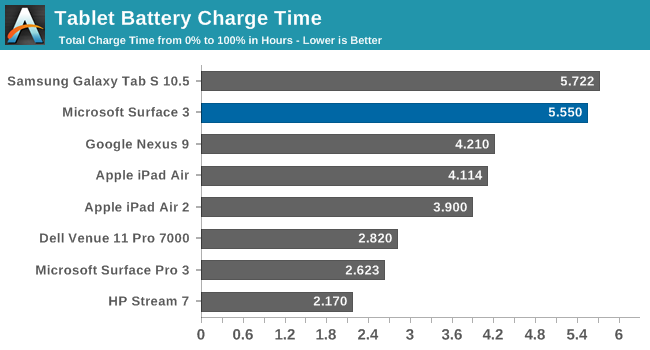 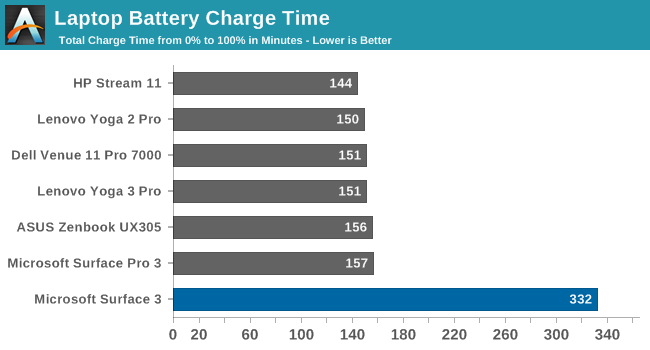 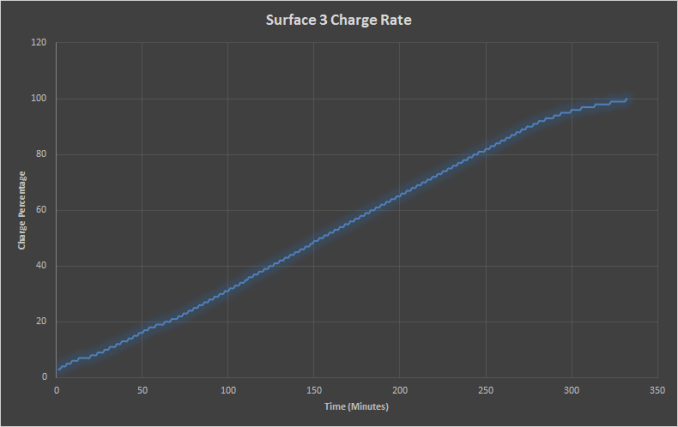 This connector is just not built for the high amperage needed to quickly charge a device up. Although I am happy to see Microsoft ditch the previous charging connector, this is where a USB Type-C connector would be much better. It can handle a lot more power, and it would have allowed the Surface 3 to come with a much higher wattage adapter. It really feels a bit like putting one foot in the past with the micro USB port. The long charge times were quite an issue for me trying to review this device, since we run our battery life tests multiple times to ensure a reliable result, but there was a very long wait to get the device ready for another run.