The Adreno 306 GPU in Snapdragon 410 is more or less just a variant of the Adreno 305 used in the Snapdragon 400 series SoCs. Because of this, there's not likely to be much improvement in terms of overall GPU performance when comparing the Moto E to older Snapdragon 400 devices like the One Mini 2 or the Moto G. 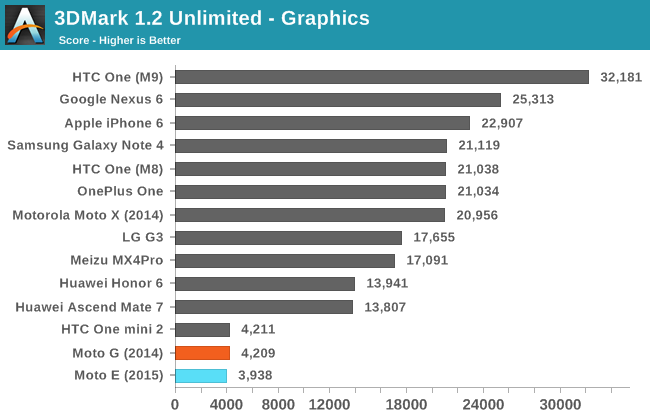 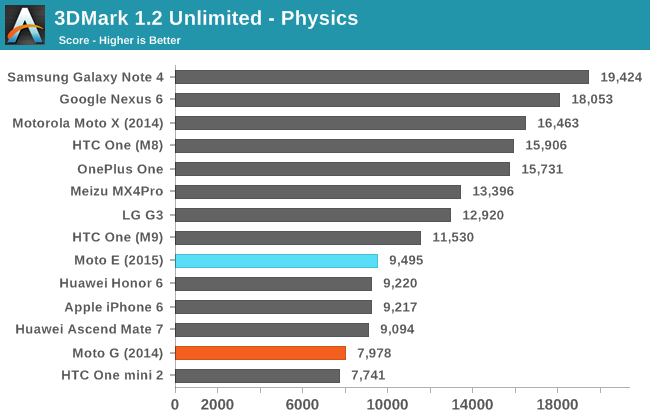 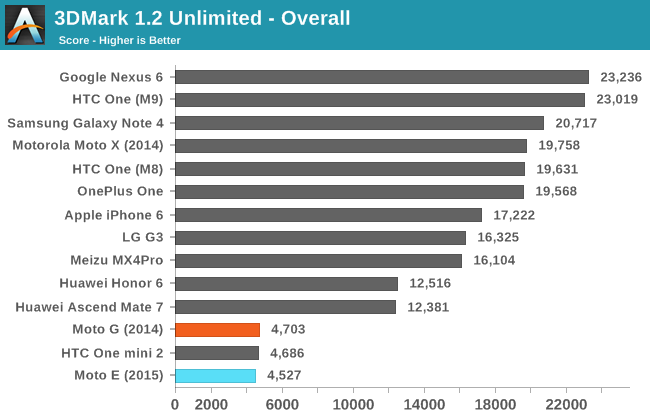 As expected, Adreno 306 performs roughly the same as Adreno 305. In the graphics test the Moto E does slightly worse than the Moto G, while it does substantially better in the physics test. Due to the heavier weighting of the graphics test, and the harmonic mean used to calculate the overall score, the Moto E actually performs every so slightly worse than the Moto G overall. I would consider the difference in graphics scores to be within the margin of error, and in general users can expect essentially the same level of performance from Adreno 306 as that of Adreno 305. 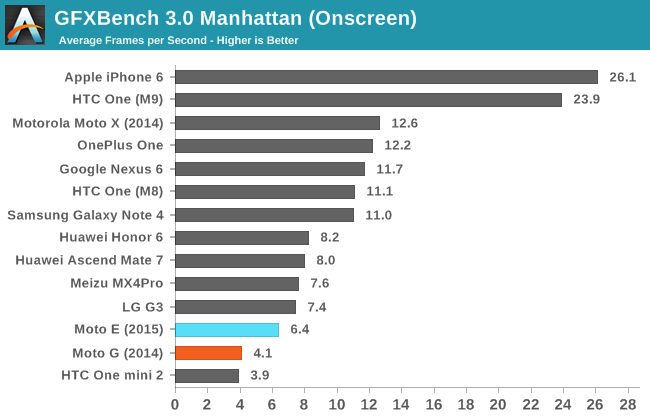 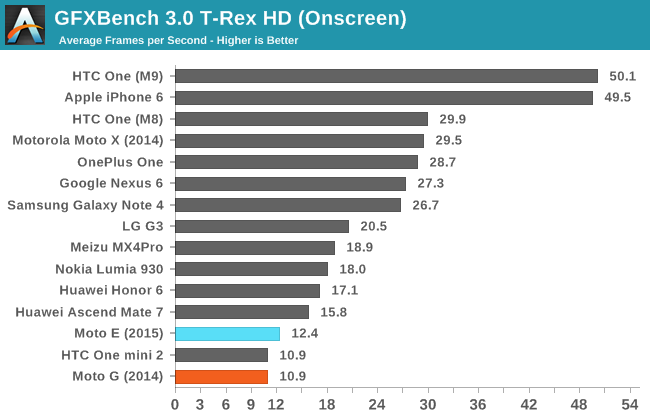 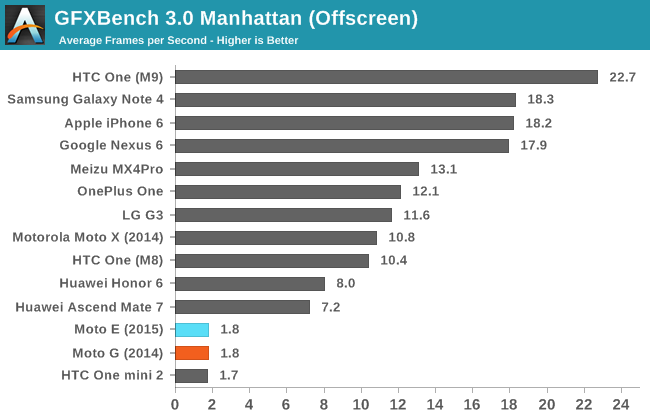 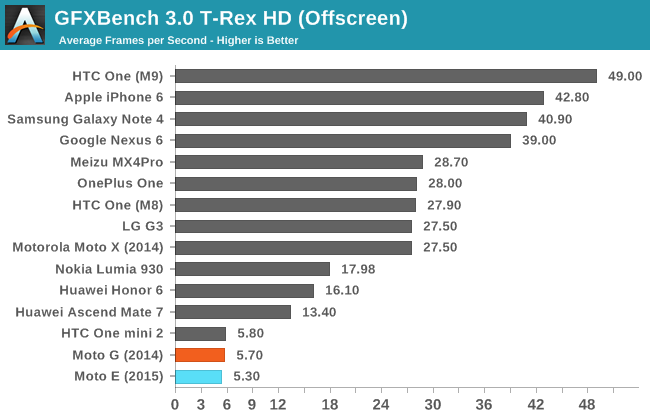 While I would normally run BaseMark X after 3DMark, a GPU driver bug prevents the test from finishing properly and no results are reported. Because of this, our last GPU test is GFXBench 3.0. In both T-Rex HD and Manhattan, the offscreen performance of Adreno 306 is roughly comparable to that of Adreno 305 in Snapdragon 400. Onscreen performance pulls ahead of the Moto G due to the Moto E's lower display resolution.

Overall, the GPU performance of the 2015 Moto E is what you'd expect from a budget device. It would be nice if there was a larger performance improvement over Snapdragon 400, but Motorola can't be faulted for that. Buyers shouldn't expect to be able to play any intensive 3D games, but the performance is more than sufficient for simple 2D games and rendering the Android interface.

NAND performance is another important aspect of mobile devices. While in the PC world vendors will sometimes make note of their HDD/SSD speeds, in the mobile world we haven't reached a point where anything beyond the amount of flash memory is stated by manufacturers. Despite this, poor NAND can be a serious bottleneck of system performance whenever something is being loaded from the internal storage, or when a background app is doing reads and writes or downloading updates. 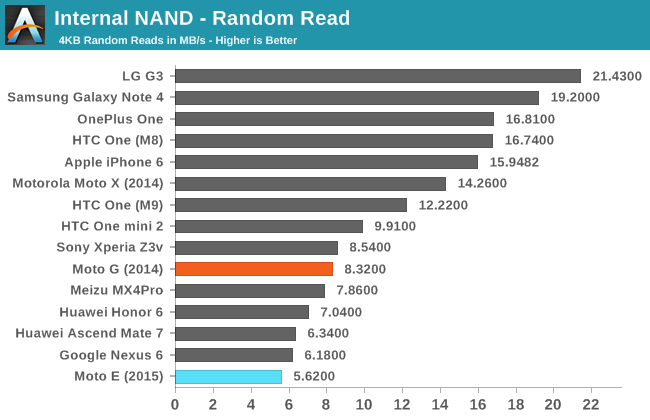 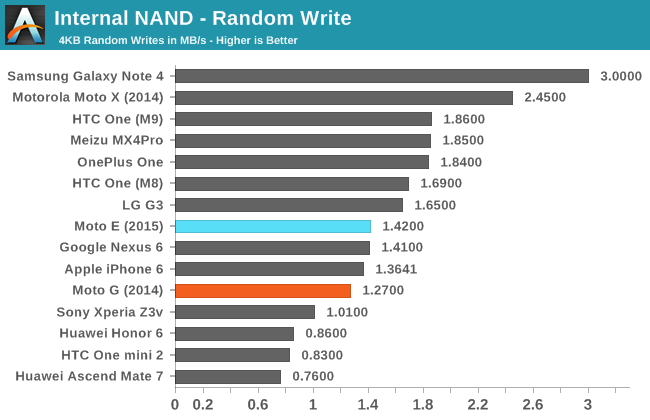 Random read speeds on the Moto E are fairly slow, and random writes are right in the middle of our comparison devices. While I don't think the random write will cause any issues, the slow random read speed may contribute to some slowness whenever applications are loading files. 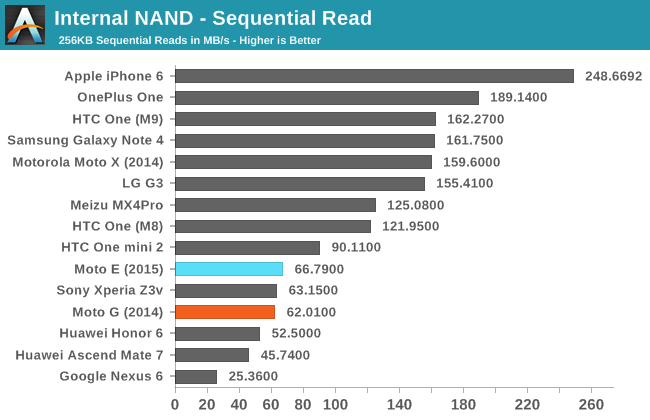 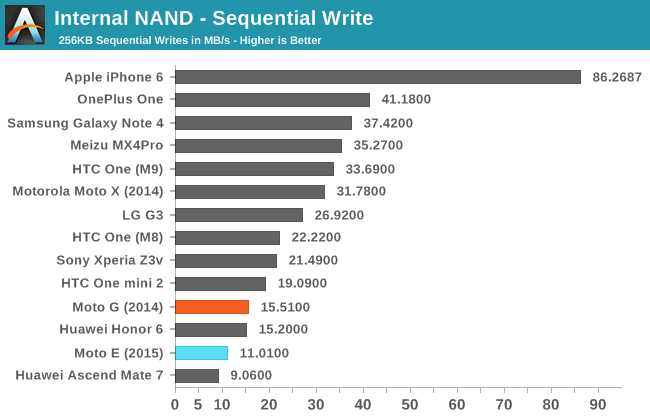 For those who are keeping track, the Moto E does not come with Android's full device encryption (FDE) enabled by default. Google appears to have stepped back from requiring FDE, and instead just recommends that it be enabled. Despite it not being enabled on the Moto E, the sequential read performance is not quite as fast as some other budget devices like the One Mini 2, although it is in line with the 2014 Moto G. Sequential write performance is unfortunately one of the lowest results on our list, although with only 5GB of accessible storage I don't imagine users will be writing many large files where it becomes a noticeable issue.