Reviewing CPUs that differ only in CPU count or clock speed but are based on similar architectures is predominantly a point and click affair. The CPU with the higher single core frequency does well in response focused benchmarks, and those with more cores with enough memory bandwidth to support them. For Xeons, the price difference for more cores or more frequency never makes much sense if you calculate the difference in terms of power, but becomes more realistic when the time-to-complete for intensive workloads is taken into account. To throw a spanner into the mix, as Johan found in his Haswell-EP testing, Xeons like the E5-2667 v3 exist to take advantage of higher AVX clock speeds due to increased power headroom, accelerating mixed-AVX workloads more than a higher core-count model which has to reduce frequency to compensate. The E5-2667 v3 therefore costs an extra $1000+ over its nearest core counterpart.

The two CPUs we have reviewed today, the E5-2695 V3 and E5-2697 V3, fall directly into Intel’s 2.3-2.6 GHz product line for Xeon E5-2600 V3 CPUs. This comes across as the main segmentation for Intel’s binning process from 8-core to 18-core, with the main differentiator relating to core count and pricing. The difference in 300 MHz comes at the expense of 25W TDP on paper as well as $278 in the back pocket.

An interesting point to note about the 2.3-2.6 GHz stack is the turbo frequencies. Not all SKUs are made similar: 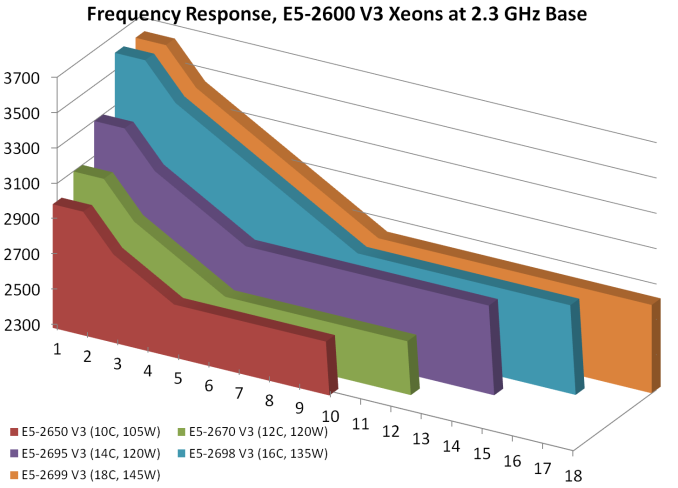 Buying a 2.3 GHz base frequency processor with more cores does several things aside from the price: raise the peak turbo frequency, extend the turbo frequencies across more cores and increase the power consumption. As a result, buying the next CPU up in the stack affords more than just a couple of extra cores – there is both single thread and multithread performance of interest. With this in mind, it might be worth examining the Xeon range from through a MHz lens next generation rather than a core viewpoint. 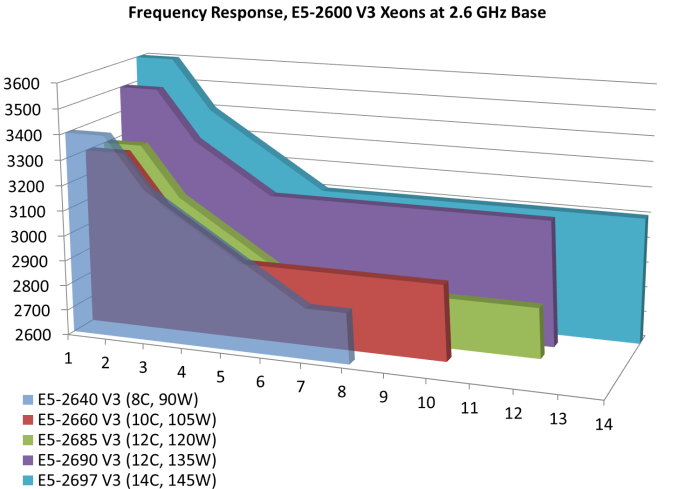 On the 2.6 GHz graph, the 8-core model starts with the higher turbo frequency and has a more regular decline, while the 10-core and 12-core are evenly matched until the 12-core reduces to a lower all-core turbo. The peak turbo frequency again lies with the parts with more cores, and thus ends up with more TDP and cost more to purchase.

I showed the 2.3 GHz graph to some of the other editors and they pointed out the obvious differentiator: the 16 core CPU has a significant MHz advantage from 1-8 core loading over the 14C variant. For any software with a variable threaded load, the 16 core would push the performance and be on par with the 18 core. The price difference between the 14 core model and the 16 core model is nearly $1000, making budgets and workloads being important factors in this decision. The prevalence of multithreaded code is server and workstation environments make the frequency difference extremely important, especially when it comes to the types of workloads that have frequent memory delays and accesses.