The absence of any moving parts inside the ZBOX CI540 nano enables a completely silent PC irrespective of the workload. This makes it an ideal HTPC. While acoustics form one part of the HTPC story, there are a few other aspects that we will cover in this section.

AMD and NVIDIA have historically been able to provide fine-grained control over display refresh rates. The default rates are also quite accurate. Intel used to have an issue with 23 Hz (23.976 Hz, to be more accurate) support, but that was resolved with the introduction of Haswell. As expected, the Zotac ZBOX CI540 nano has no trouble with refreshing the display appropriately in the 23 Hz setting. 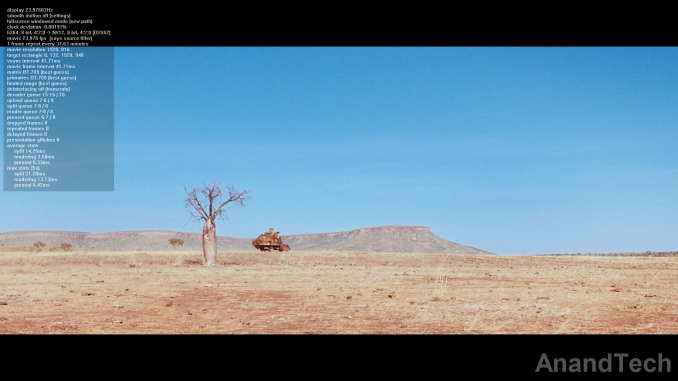 Evaluation of OTT playback efficiency was done by playing back our standard YouTube test stream and five minutes from our standard Netflix test title. Using HTML5, the YouTube stream plays back a 720p encoding, while Adobe Flash delivers a 1080p stream. Note that only NVIDIA exposes GPU and VPU loads separately. Both Intel and AMD bundle the decoder load along with the GPU load. The following two graphs show the power consumption at the wall for playback of the HTML5 stream and the Adobe Flash stream in Mozilla Firefox v32.0.1. The GPU load while playing back the HTML5 version is around 23.46%. In the Adobe Flash case, it is a bit lower at 18.84%. 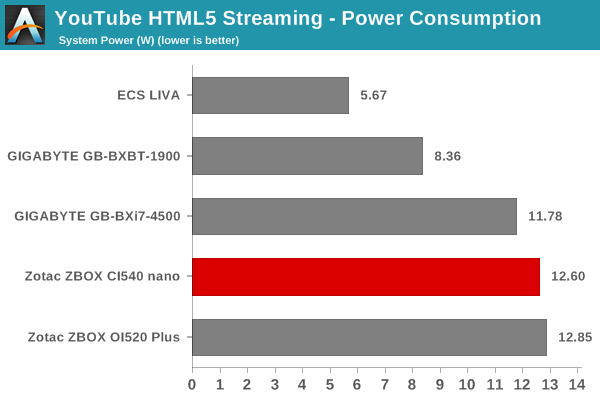 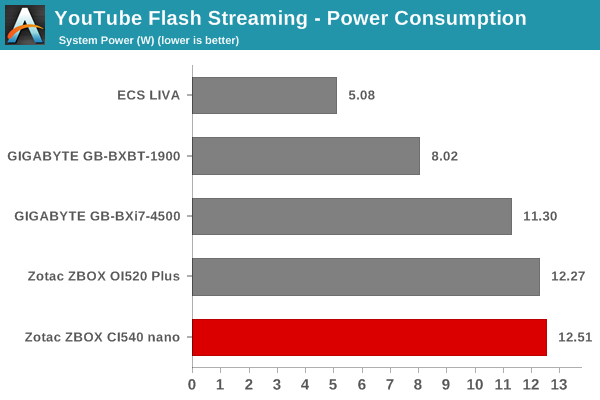 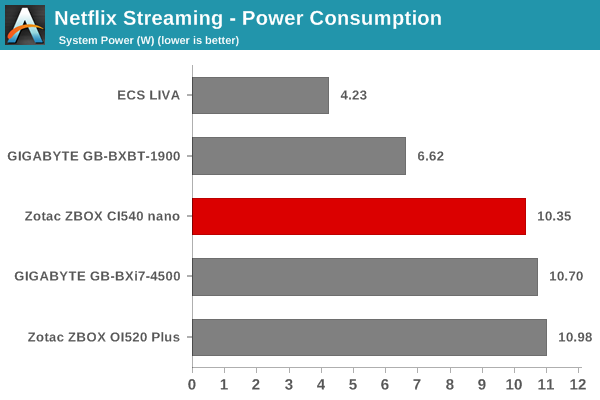 Despite being passively cooled, the ZBOX CI540 nano (as we configured it) is not particularly power efficient when it comes to network streaming. This is in part due to the powerful DRAM component (8 GB, clocked at 1600 MHz). That said, we did see the CI540 nano come out better in the benchmarks sections. It is clear that there is performance to be exploited in the Y-series CPUs, but the obvious penalty is the power consumption.

In order to evaluate local file playback, we usually concentrate on EVR-CP and madVR. We already know that EVR works quite well even with the Intel IGP for our test streams. madVR performance hasn't been great with the Intel HD Graphics 4400-equipped PCs. Instead, we decided to focus on a more common use-case for this PC: XBMC. For EVR-CP, the decoder used was LAV Filters bundled with MPC-HC v1.7.7. The latest stable XBMC version (XBMC 13.2) was used with default configuration for the second set.

One of the surprising aspects with XBMC was that the default home screen resulted in a constant GPU loading of around 35.68% and idle power consumption at the wall of 13.52W (and the GPU loading / power consumption actually decreased during playback of most of our test streams). This shows that there is plenty of scope for power optimization when it comes to XBMC on Windows. Coming back to the decoder / rendering benchmarks, both DXVA2 decoding with LAV filters and rendering using EVR-CP as well as XBMC get through our test suite (including 4K decode) without any issues. HD audio bitstreaming is also not a problem. For the average media playback application, the ZBOX CI540 nano is a winner in every aspect other than power consumption.