Having spent plenty of time with the Mate 7 I think I've build quite a good opinion of the device. Huawei's new flagship remains polarizing as it offers some quite positive aspects while carrying some big compromises. Huawei again impressed me with their software implementation of Android - they're delivering extremely innovative and useful features with EmUI 3.0 while still packaging it in an attractive presentation that doesn't compromise the user experience. I really wished more OEMs would follow suite in offering such substantial additions to the OS. The security and privacy features on the Mate 7 really left a mark on me as things such as blocking off select galleries or apps with help of a security code or with ease of the fingerprint sensor really made me wonder why we haven't seen this already years ago as it makes so much sense in a mobile device.

While I've had very little criticism towards their software stack, it's on the hardware where we find the Mate 7's weaknesses. And it's not the build of the phone that I'm talking about. The phone itself is very sturdy and with even though it's wider than the Note 4 for example, it makes up in terms of ease of use due to comfortable edges and a thinner design. Speaking of design - there's nothing to object to the Mate 7. It's a traditional phablet industrial design which tries to differentiate itself with help of small distinctive features such as the lips of the phone or back features like the fingerprint sensor and the camera housing. 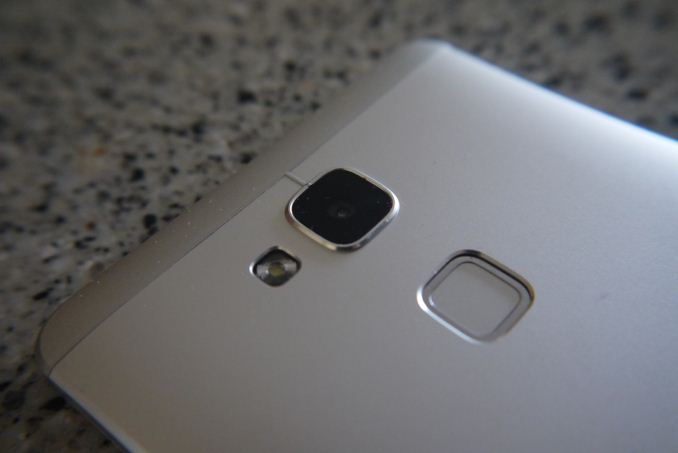 Rather than any build quality issues, the Mate 7's weaknesses are primarily centered upon component choices. I understand Huawei wanting to try to achieve vertical integration for their products, but I think it's too early for the HiSilicon SoC to be a viable alternative to solutions from dominant suppliers such as Qualcomm. Even though the 4100mAh battery is large enough to push the device towards the top of the battery charts, it's more due to brute force of the battery capacity itself than due to efficiency of the platform.

Outside of the power and thermal management configuration issues, we see issues with the GPU, NAND and camera performance. I'm convinced the first and the last would have been an non-issue had Huawei made a pass on its in-house SoC, and the NAND performance could have been fixed with a slightly higher investment in a better quality eMMC solution.

I've mentioned that I still haven't done objective tests due to my network limitations, but Huawei's integrated modem was an aspect that many people were looking forward to being investigated. I don't think Huawei delivered anything groundbreaking here - battery performance under mobile connectivity suffers visibly in my subjective usage.

I find myself in a eerily similar situation while writing this as when I was doing the conclusion for Honor 6 review. The Mate 7 is an overall good device with some major drawbacks. It's the price which decides if this is a worthy purchase or not. At 499 and 599€ official price points (and now can be found for down to 450€ for the 16GB version) it's not worth the money. If you spend that much, you might as well get a Note 4 for an additional 150€ and enjoy a device that is better in almost every aspect.

Here's hoping that Huawei continues to improve as they've again showed that they have the potential. They're on the right track with the ideas, but still stumbling on execution.