A8’s CPU: What Comes After Cyclone?

Despite the importance of the CPU in Apple’s SoC designs, it continues to be surprising just how relatively little we know about their architectures even years after the fact. Even though the CPU was so important that Apple saw the need to create their own custom design, and then did two architectures in just the span of two years, they are not fond of talking about just what it is they have done with their architectures. This, unfortunately, is especially the case at the beginning of an SoC’s lifecycle, and for A8 it isn’t going to be any different.

Overall, from what we can tell the CPU in the A8 is not a significant departure from the CPU in A7, but that is not a bad thing. With Cyclone Apple hit on a very solid design: use a wide, high-IPC design with great latency in order to reach high performance levels at low clock speeds. By keeping the CPU wide and the clock speed low, Apple was able to hit their performance goals without having to push the envelope on power consumption, as lower clock speeds help keep CPU power use in check. It’s all very Intel Core-like, all things considered. Furthermore given the fact that Cyclone was a forward-looking design with ARMv8 AArch64 capabilities and already strong performance, Apple does not face the same pressure to overhaul their CPU architecture like other current ARMv7 CPU designers do. 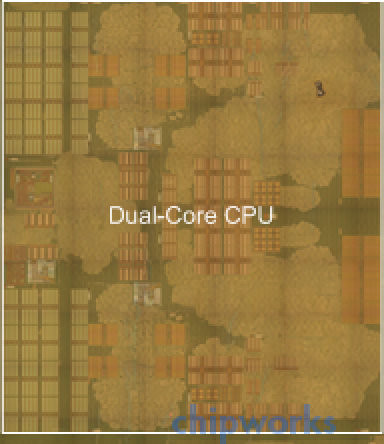 As a result, from the information we have been able to dig up and the tests we have performed, the A8 CPU is not radically different from Cyclone. To be sure there are some differences that make it clear that this is not just a Cyclone running at slightly higher clock speeds, but we have not seen the same kind of immense overhaul that defined Swift and Cyclone.

Unfortunately Apple has tightened up on information leaks and unintentional publications more than ever with A8, so the amount of information coming out of Apple about this new core is very limited. In fact this time around we don’t even know the name of the CPU. For the time being we are calling it "Enhanced Cyclone" – it’s descriptive of the architecture – but we’re fairly certain that it does have a formal name within Apple to set it apart from Cyclone, a name we hope to discover sooner than later.

The question of the moment is what Apple has put their additional transistors and die space to work on. Some of that is no doubt the memory interface, which as we’ve seen earlier L3 cache access times are nearly 20ns faster in our benchmarks. But if we dig deeper things start becoming very interesting.

First and foremost, in much of our testing Enhanced Cyclone performs very similarly to Cyclone. Accounting for the fact that A8 is clocked at 1.4GHz versus 1.3GHz for A7, in many low-level benchmarks the two perform as if they are the same processor. Based on this data it looks like the fundamentals of Cyclone have not been changed for Enhanced Cyclone. Enhanced Cyclone is still a very wide six micro-op architecture, and branch misprediction penalties are similar so that it’s likely we’re looking at the same pipeline length.

Meanwhile floating point addition shows similar benefits, though not as great as integer multiplication. Throughput is such that there appears to still be three FP ALUs, but like integer multiplication the instruction latency has been reduced. Apple has managed to shave off a cycle on FP addition, so it now completes in four cycles instead of five. Both of these improvements indicate that Enhanced Cyclone is not identical to Cyclone – the additional INT MUL unit in particular – making them very similar but still subtly different CPU architectures. 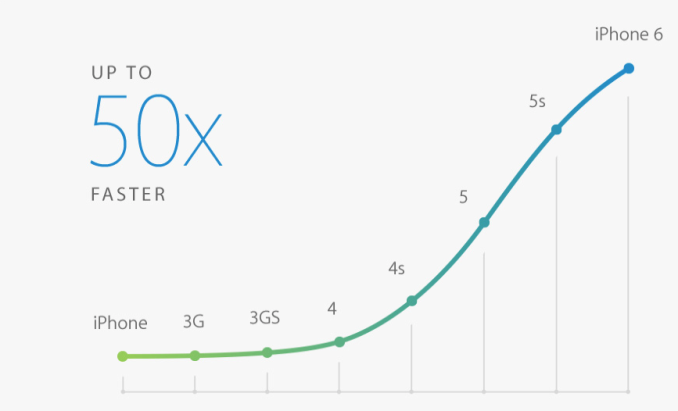 Outside of these low-level operations, most other aspects of Enhanced Cyclone seem unchanged. L1 cache remains at 64KB I$ + 64KB D$ per CPU core, where it was most recently doubled for Cyclone. For L2 cache Chipworks believes that there may be separate L2 caches for each CPU core, and while L2 cache bandwidth is looking a little better on Enhanced Cyclone than on Cyclone, it’s not a “smoking gun” that would prove the presence of separate L2 caches. And of course, the L3 cache stands at 4MB, with the aforementioned improvements in latency that we’ve seen.

To borrow an Intel analogy once more, the layout and performance of Enhanced Cyclone relative to Cyclone is quite similar to Intel’s more recent ticks, where smaller feature improvements take place alongside a die shrink. In this case Apple has their die shrink to 20nm; meanwhile they have made some small tweaks to the architecture to improve performance across several scenarios. At the same time Apple has made a moderate bump in clock speed from 1.3GHz to 1.4GHz, but it’s nothing extreme. Ultimately while two CPU architectures does not constitute a pattern, if Apple were to implement tick-tock then this is roughly what it would look like.

For our first high level benchmark we turn to SPECint2000. Developed by the Standard Performance Evaluation Corporation, SPECint2000 is the integer component of their larger SPEC CPU2000 benchmark. Designed around the turn of the century, officially SPEC CPU2000 has been retired for PC processors, but with mobile processors roughly a decade behind their PC counterparts in performance, SPEC CPU2000 is currently a very good fit for the capabilities of Cyclone and Enhanced Cyclone.

SPECint2000 is composed of 12 benchmarks which are then used to compute a final peak score. Though in our case we’re more interested in the individual results.

Keeping in mind that A8 is clocked 100MHz (~7.7%) higher than A7, all of the SPECint2000 benchmarks show performance gains above and beyond the clock speed increase, indicating that every benchmark has benefited in some way. Of these benchmarks MCF, GCC, PerlBmk and GAP in particular show the greatest gains, at anywhere between 20% and 55%. Roughly speaking anything that is potentially branch-heavy sees some of the smallest gains while anything that plays into the multiplication changes benefits more.

MCF, a combinatorial optimization benchmark, ends up being the outlier here by far. Given that these are all integer benchmarks, it may very well be that MCF benefits from the integer multiplication improvements the most, as its performance comes very close to tracking the 2X increase in multiplication throughput. This also bodes well for any other kind of work that is similarly bounded by integer multiplication performance, though such workloads are not particularly common in the real world of smartphone use.

Geekbench’s integer results are overall a bit more muted than SPECint2000’s, but there are still some definite high points and low points among these benchmarks. Crypto performance is among the lesser gains, while Sobel and Dijkstra are among the largest at 21% and 37% respectively. Interestingly in the case of Dijkstra, this does make up for the earlier performance loss Cyclone saw on this benchmark in the move to 64-bit.

While the low-level floating point tests we ran earlier didn’t show as significant a change in the floating point performance of the architecture as it did the integer, our high level benchmarks show that floating point tests are actually faring rather well. Which goes to show that not everything can be captured in low level testing, especially less tangible aspects such as instruction windows. More importantly though this shows that Enhanced Cyclone’s performance gains aren’t just limited to integer workloads but cover floating point as well.

Overall, even without a radical change in architecture, thanks to a combination of clock speed increases, architectural optimizations, and memory latency improvements, Enhanced Cyclone as present in the A8 SoC is looking like a solid step up in performance from Cyclone and the A7. Over the next year Apple is going to face the first real competition in the ARMv8 64-bit space from Cortex-A57 and other high performance designs, and while it’s far too early to guess how those will compare, at the very least we can say that Apple will be going in with a strong hand. More excitingly, most of these performance improvements build upon Apple’s already strong single-threaded IPC, which means that in those stubborn workloads that don’t benefit from multi-core scaling Apple is looking very good.