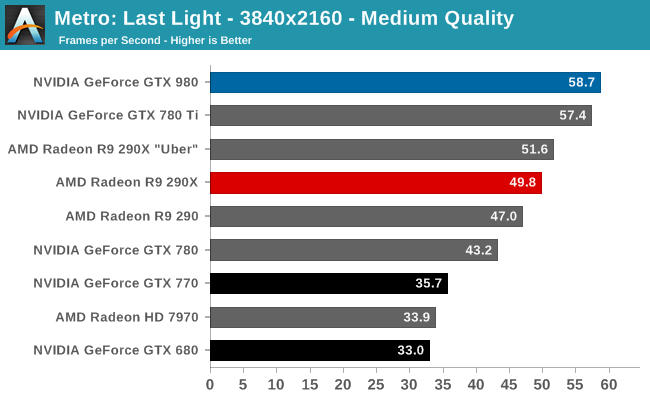 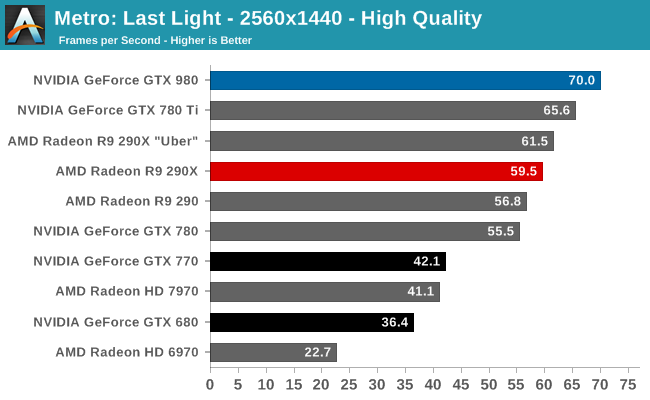 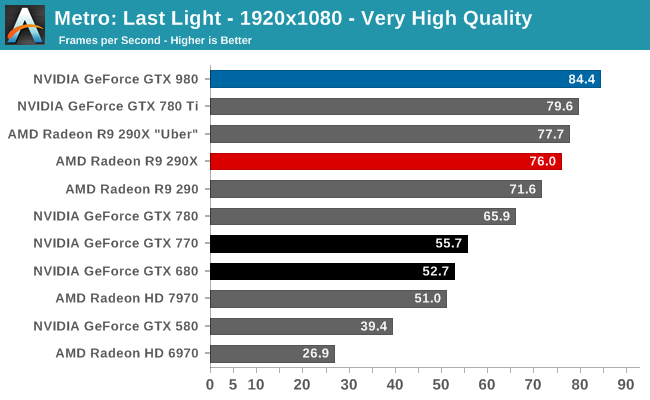 As has become customary for us for the last couple of high-end video card reviews, we’re going to be running all of our 4K video card benchmarks at both high quality and at a lower quality level. In practice not even GTX 980 is going to be fast enough to comfortably play most of these games at 3840x2160 with everything cranked up – that is going to be multi-GPU territory – so for that reason we’re including a lower quality setting to showcase just what performance looks like at settings more realistic for a single GPU.

GTX 980 comes out swinging in our first set of benchmarks. If there was any doubt that it could surpass the likes of R9 290XU and GTX 780 Ti, then this first benchmark is a great place to set those doubts to rest. At all resolutions and quality settings it comes out on top, surpassing NVIDIA’s former consumer flagship by anywhere from a few percent to 12% at 4K with high quality settings. Otherwise against the R9 290XU it’s a consistent 13% lead at 2560 and 4K Medium.

In absolute terms this is enough performance to keep its average framerates well over 60fps at 2560, and even at 3840 Medium it comes just short of crossing the 60fps mark. High quality mode will take the wind out of GTX 980’s sails though, pushing framerates back into the borderline 30fps range.

Looking at NVIDIA’s last-generation parts for a moment, the performance gains over the lower tier GK110 based GTX 780 are around 25-35%. This is about where you’d expect to see a new GTX x80 card given NVIDIA’s quasi-regular 2 year performance upgrade cadence. And when extended out to a full 2 years, the performance advantage over GTX 680 is anywhere between 60% and 92% depending on the resolution we’re looking at. NVIDIA proclaims that GTX 980 will achieve 2x the performance per watt of GTX 680, and since GTX 980 is designed to operate at a lower TDP than GTX 680, as we can see it means performance over GTX 680 won’t quite be doubled in most cases.