Unlike most subjects that need significant explanation to justify the rigor of testing, battery life is something that everyone can appreciate. However, for those that are unfamiliar with our testing, we make it a goal to produce a repeatable, realistic test. In order to do this, our web browsing test runs a loop of webpages that ensures all power states with the screen on are properly represented in the test. In order to control for extraneous variables we standardize display brightness to 200 nits with strong signal. 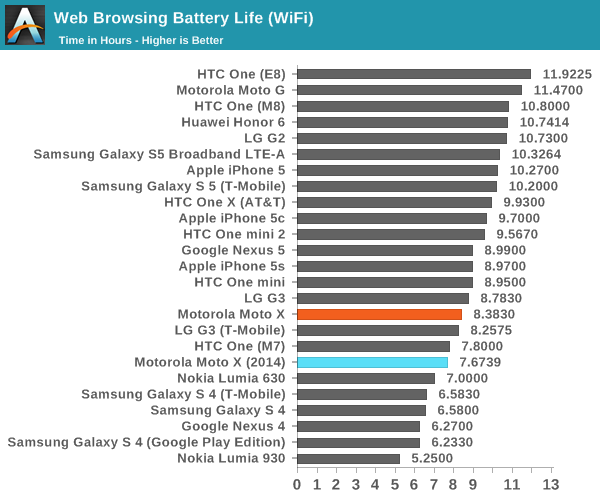 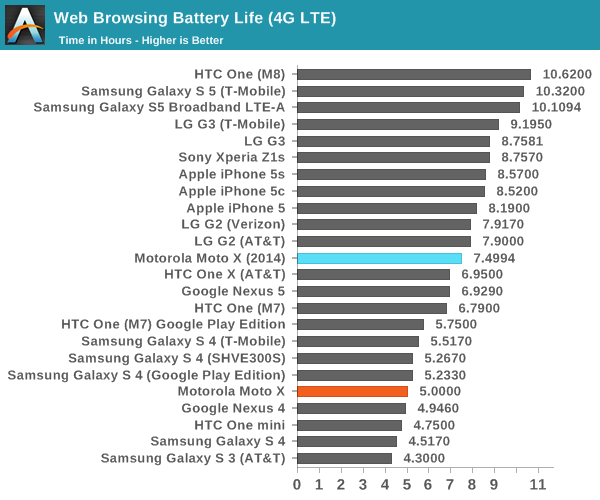 On LTE, the new Moto X is noticeably trailing behind the rest of the competition. Here we see that battery life is just behind the LG G2, but behind all recent Apple iPhones and just about every other Android high-end flagship phone launched in 2014. While the new Moto X has definitely improved over the previous Moto X, it seems that Motorola has used the newer AMOLED panel and lower power SoC to avoid using a significantly larger battery.

However, web browsing is not the only scenario worth testing. As the web browsing test is largely dominated by display power, it’s important that we test scenarios where all the other subsystems are more dominant in the power equation. For this, we turn to Basemark OS II and GFXBench 3.0, which focus more on CPU and GPU power consumption.

Unfortunately, I could not get our GFXBench rundown test to complete despite multiple attempts as it seems that the phone would either reboot or kill the application. Looking at the logs for the rundown test reveals that there’s no real change in FPS from run to run. After some extra investigation, it seems that this build (KXE21.187-43) doesn't do any throttling on GPU, so any workload that can keep the GPU at maximum heat output without dependence on CPU can cause the phone to reach unacceptable temperatures.

At any rate, the Basemark OS II run did complete so we can look at that. 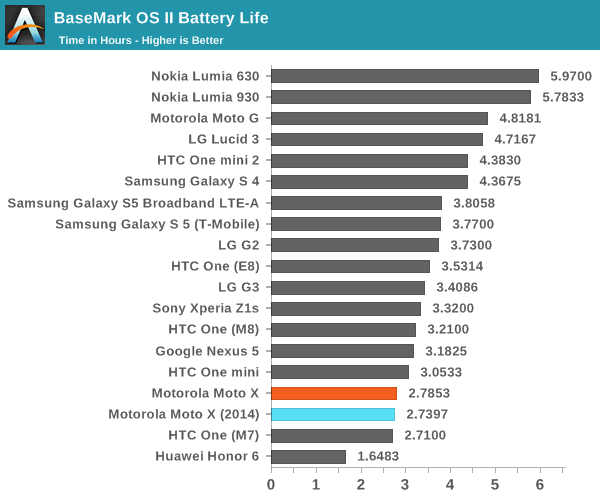 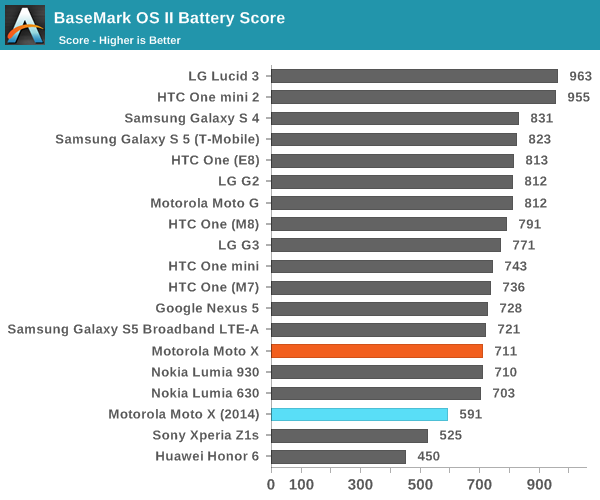 Unfortunately the Basemark OS II test reveals that battery life is poor compared to the competition. Normally, low battery life is compensated for by high performance but the battery score is only above the Sony Xperia Z1s and Huawei Honor 6, and the latter had no power budgeting mechanisms on the SoC to keep battery life at acceptable levels.

Overall, it’s hard to really say much in the way of praise for battery life. While it’s definitely surprising just how much battery life Motorola has achieved given the size of the battery and display, I suspect that Motorola found themselves in an uncomfortable situation as they tried to deliver a bigger display while keeping the phone easy to use with one hand. I suspect that all things considered, Motorola would have been better off if they went for a smaller display and the smaller height and width that would logically follow. It’s also not that the battery life is bad in an absolute sense, but it isn’t as good as its peers. Motorola is likely tracking closely to their estimated 24 hours of “mixed usage”. The use of Moto Display will also go a long way to reduce the time with the AP and display on.

Before I conclude this section, I just wanted to note that Android L alone won’t improve battery life on these tests. Android RunTime (ART) won’t help with battery life as these applications are native code. Job Scheduler is also irrelevant to our tests, as it will only improve battery life in situations where multiple applications are running in the background. We make every effort to ensure that no background tasks occur during these battery life tests and auto-sync is disabled as well in order to make sure that the only task running is the one under test. We have already run the data early in the summer on the Nexus 5 with Android L developer preview and our data does not show any significant difference in battery life. However, in real world usage where background applications and data syncing are active, one can expect greater battery life with Android L but only in the range of 10-15%.

While battery life from full charge to no charge is critical, in many situations the reverse is also important. For example, if one only has an hour before a flight, the rate at which the battery charges is just as important as the rate at which it discharges in use. In order to test this, the phone is connected to the included charger and the time from the battery begins charging to the time the charger stops drawing significant power is measured, as charging LEDs can often be an inaccurate method of determining charge time. 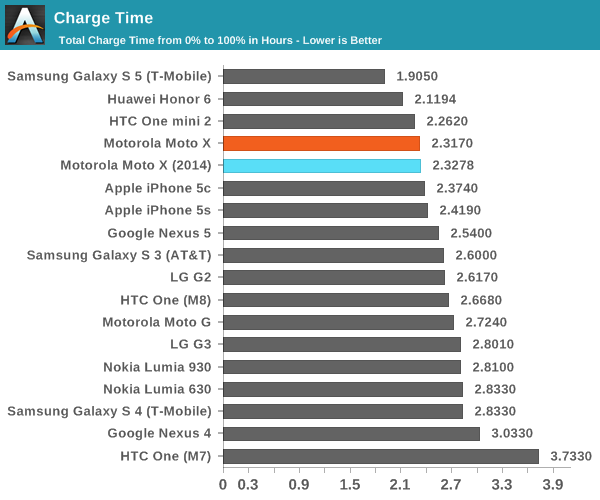 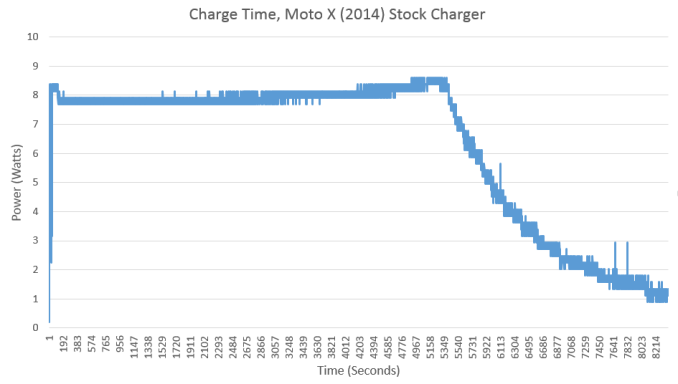 Motorola ends up on the high side here, which is somewhat expected due to the relatively small battery. I'm surprised that this is possible with a 5V, 1.15A charger though.