Our sample provided by AMD for today’s launch is Sapphire’s R9 285 Dual-X OC 2GB. As we mentioned before this is a non-reference launch, so rather than ship out engineering cards that won’t see retail AMD has sent us proper retail cards.

Sapphire’s R9 285 Dual-X OC is in turn a good example of what kinds of cards are appearing on store shelves. As R9 285 is a sub-200W product all of the launch cards have followed the same basic design, utilizing their manufacturer’s respective dual fan open air designs. So if you like full size open air cards then you’ll have your pick of the litter. However it also means that there aren’t any blowers on the market – nor do we expect any in the development pipeline – so for the moment the market for R9 285s is rather homogenous. In Sapphire’s case, though not available at launch, we will eventually see them break the mold with a smaller single-fan card specifically designed for use in ITX systems.

But getting to the R9 285 Dual-X OC, the Dual-X is a solid entry from Sapphire that is very typical of their current designs. As given away by the name, this card utilizes a 10” version of Sapphire’s Dual-X open-air cooler, and among Sapphire’s product lineup it can be considered the company’s baseline cooler for products up to 250W. Meanwhile as an OC model Sapphire is shipping this card with a mild factory overclock of 965MHz for the core and 5.6GHz for the memory, which represents a 47MHz (5%) core overclock and 100MHz (2%) memory overclock. Though note that Sapphire is also producing an identical version of this hardware without the factory overclock.

Continuing with our overall theme of R9 285 being a lateral product for AMD, the same is unsurprisingly true for Sapphire. For the R9 285 Dual-X Sapphire has opted to port over the design of their existing R9 280 Dual-X (which happens to be our R9 280 test card), building a suitable new PCB for Tonga but otherwise retaining the R9 280’s cooler and functionality. With R9 280 being a more power hungry part (on paper at least), this means the R9 285 Dual-X cooler is slightly overpowered in comparison, which should bode well for temperature/acoustic performance and for overclocking. 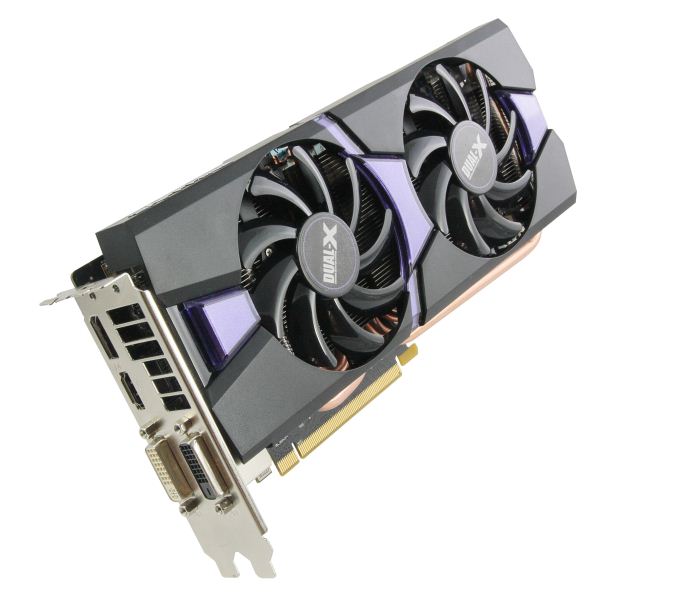 The Dual-X cooler itself is something of a tried and true design for Sapphire at this point, as years of iteration on dual fan coolers has resulted in these designs coalescing into similar and highly effective coolers. Starting from the top, the 10” version of the Dual-X cooler utilizes a pair of 85mm fans, allowing it to provide more than sufficient airflow for the primary and VRM heatsinks. Buyers with cramped cases will want to note that the use of such a large fan does result in a shroud larger than the PCB itself, with the shroud extending an additional 1cm over the PCB.

Below the fans we find Sapphire’s primary heatsink, which is composed of aluminum and runs just short of the entire length of the cooler. Sapphire attaches the primary heatsink to the GPU through the use of 4 copper heatpipes which run between the GPU and various points on the heatsink. The heatpipes in turn do not make direct contact with the GPU, but instead attach to a copper baseplate which in turn is what makes contact with the GPU and channels heat into the heatpipes.

Surrounding the copper baseplate is a secondary aluminum baseplate which provides both structure for the overall heatsink and additional cooling. Through the use of thermal pads, the aluminum baseplate covers the card’s RAM chips, providing direct cooling for the RAM. Meanwhile the card’s VRMs are not part of the primary heatsink assembly, and are instead cooled via a smaller secondary “strip” heatsink that sits over the MOSFETs towards the rear of the card. Airflow making it through the primary heatsink is in turn responsible for cooling this secondary heatsink.

Removing the heatsink and accessing the PCB, Sapphire’s PCB is typical for a 200W card. Sapphire places the bulk of the VRM circuitry towards the rear of the card, between the GPU/RAM and the PCIe power sockets. Meanwhile Sapphire’s RAM of choice is 6GHz Elpedia, which means this card ships at a lower memory frequency than what the RAM is capable of. For overclockers this means there’s some guaranteed headroom on the RAM, while the lower shipping frequency may indicate that AMD has tuned Tonga’s memory controllers for sub-6GHz operation, similar to what happened with Hawaii. 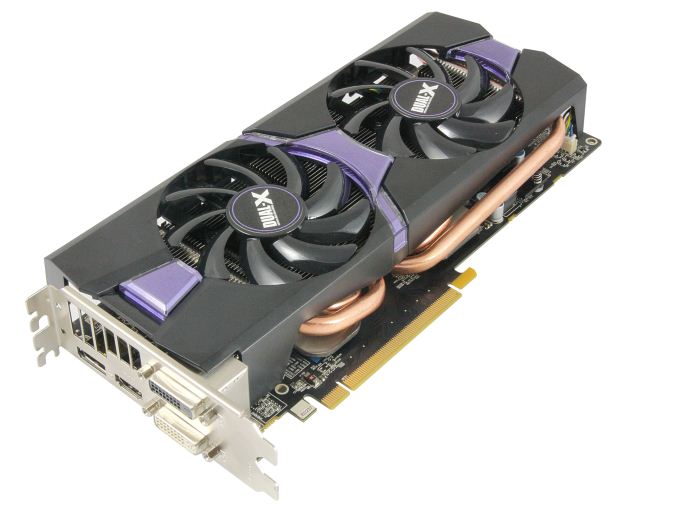 Throughout all of this the R9 285 Dual-X OC is generally a solid card, but the heatsink/PCB interaction does expose the card’s one real weakness/design flaw, which is a lack of rigidity. As is almost always the case with these large heatsink cards, the heatsink is massive enough that for all practical purposes the PCB is attached to the heatsink rather than vice versa. However Sapphire only attaches the heatsink to the PCB at the 4 screws around the GPU, which for a 10.25” card means the far end of the card is far removed from these attachment points and is left free to flex. Sapphire does include a plastic leg at one corner of the shroud to keep the PCB from flexing too much, but this leg isn’t secured to the PCB and indeed isn’t even long enough to touch the PCB without flexing. Ideally we would like to see all 9”+ cards reinforced against flexing for this reason, either by securing the shroud to the PCB at the rear of the card or by employing a stiffener along the top edge of the PCB.

Moving on, Sapphire doesn’t list an official TDP for the R9 285 Dual-X OC, however given the factory overclock it’s fair to say that in practice it’s going to be a bit higher than AMD’s official 190W TDP of a stock R9 285. Providing power for the card is a pair of 6pin PCIe power connectors at the top-rear of the card, which along with the PCIe slot connector means the card has the means to deliver up to 225W of power (VRMs willing). Interestingly Sapphire’s PCB has an additional pair of solder points for replacing one of the 6pin connectors with an 8pin connector, which may indicate a future Sapphire card or Sapphire hedging their bets for the inevitable higher tier Tonga card with all 32 CUs enabled.

Meanwhile though you won’t find a Crossfire connector at the top of the card – having been made obsolete by GCN 1.1+’s XDMA engines – what you will find on the Sapphire card is a BIOS switch. Sapphire ships the R9 285 Dual-X as a dual BIOS UEFI card, with one BIOS for legacy systems and a second BIOS for UEFI systems. The card’s default shipping state will be for the legacy BIOS, while depressing the BIOS button will switch to UEFI. Outside of reference cards we don’t see too many dual BIOS cards, and given the limited selection of such cards we are rather fond of the fact that Sapphire uses a button here as opposed to a more difficult to access switch.

Finally, towards the front of the card we see the standard AMD 200 series I/O configuration of 1x DL-DVI-I, 1x DL-DVI-D, 1x HDMI, and 1x DisplayPort. Tonga has up to 6 display controllers, and while not easy it should be possible to use all 6 of them through a careful use of MST off of the DisplayPort and identical monitors hanging off of the HDMI and DVI ports. 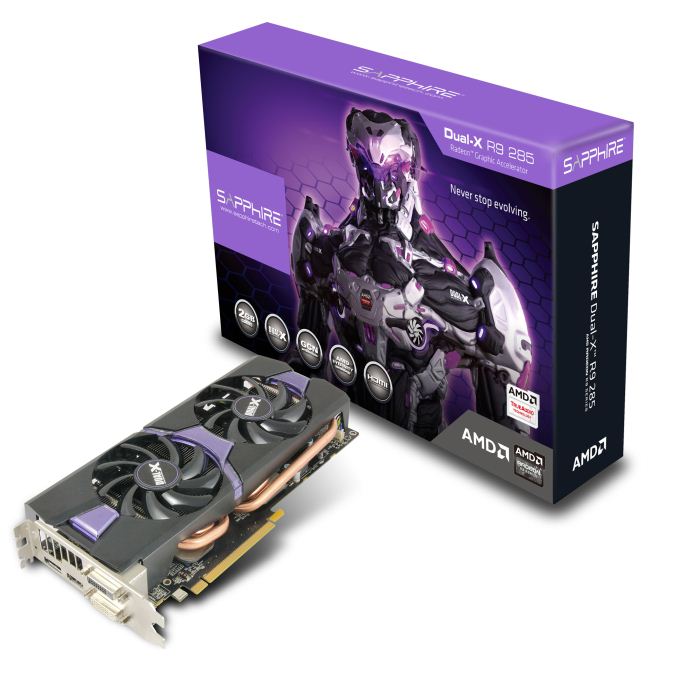 Wrapping things up, the retail price on the R9 285 Dual-X OC is currently running at $259. This puts Sapphire’s card at $10 over the R9 285 MSRP of $249, though given the fact that this is a factory overclocked card this is par for the course. We haven’t seen the non-OC version for sale yet, but one way or another you’re essentially looking at paying a 4% price premium for roughly as much of a performance advantage over a stock R9 285.