While there are few web servers that actually need such processing behemoths, we decided to go ahead and test in this area, just for the sake of satifying our curiosity. Most websites are based on the LAMP stack: Linux, Apache, MySQL, and PHP. Few people write HTML/PHP code from scratch these days, so we turned to running a Drupal 7.21 based site. The web server is Apache 2.4.7 and the database is MySQL 5.5.38 on top of Ubuntu 14.04 LTS.

Drupal powers massive sites like The Economist and MTV Europe and has a reputation of being a hardware resources hog. That is a price more and more developers pay happily for lowering the time to market for their work. We tested the Drupal website with our vApus stress testing framework and increased the number of connections from 5 to 1500.

First we report the maximum throughput achievable with 95% percent of requests being handled faster than 100 ms. It is important to note that there's a chance that a user experiences a much slower response time on a request, which could be much longer than 100 ms. Also, as each page view consists of many requests, there's an increased chance that one of the "slow responses" is among them. So the average response time is definitely a very bad indicator of user experience, and ensuring the 95% percentile is still fast enough is a lot safer. 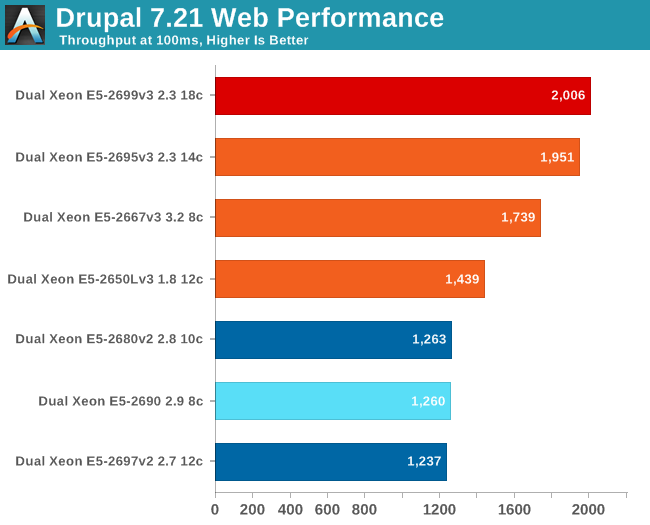 In the case of our Drupal testing, the new Haswell EP Xeons definitely take the lead, but at the top of the stack we don't see a lot of scaling with additional cores – the E5-2699 v3 and the E5-2695 v3 deliver nearly the same result. There are several reasons for this. The first is that the database of our current test website is too small. The second is that we still need to fine tune the configuration of our website to scale better with such high core counts.

We'll remedy this in the future as we adapt our tuning. Right now, it seems that we get good scaling up to 24 physical cores, but beyond that our tuning probably needs more work. Nevertheless, we felt we should share this result as most website owners do not have a specialized "make it scale" engineering team like Google and Facebook. And yes, it is probably better to load balance your website over several smaller nodes.

Still, the results are quite interesting. It looks like the new Xeon v3 scales better. The Xeon E5-2690 has no trouble keeping up – thanks to its higher clock speed – with the Ivy Bridge EP Xeon, which features a higher core count. The Xeon E5-2650L v3 has a lower clock speed but is able to use its higher core count to perform better. One of the reasons might be the fact that synchronization latency has been significantly improved.