The vast majority of PCIe SSDs have been disappointing up to this point. We either saw poorly implemented designs that offered SATA RAID on a PCIe card or high priced, proprietary PCIe designs. The arrival of NVMe gives SSDs the breathing room they need to continue to grow. We finally get a low latency, low overhead interface and we get to shed SATA once and for all.

Intel's SSD DC P3700 gives us our first look at an NVMe drive, and the results are impressive. A single P3700 can deliver up to 450K random read IOPS, 150K random write IOPS and nearly 2GB/s of sequential writes. Sequential reads are even more impressive at between 2 - 3GB/s. All of this performance comes with very low latency operation thanks to an updated controller and the new NVMe stack. CPU efficiency is quite good thanks to NVMe as well. You get all of this at $3/GB, or less ($1.4975/GB) if you're willing to give up some performance and endurance. As an enterprise drive, the P3700 is an excellent option. I can't imagine what a few of these would do in a server. At some of the price points that Intel is talking about for the lower models, the P3xxx series won't be too far out of the reach of performance enthusiasts either.

Intel's P3700 launch deck had a slide that put the P3700's performance in perspective compared to the number of SATA SSDs it could replace. I found the comparison interesting so I ran similar data, assuming perfect RAID scaling from adding together multiple DC S3700s. The comparison isn't perfect (capacity differences for one), but here's what I came up with: 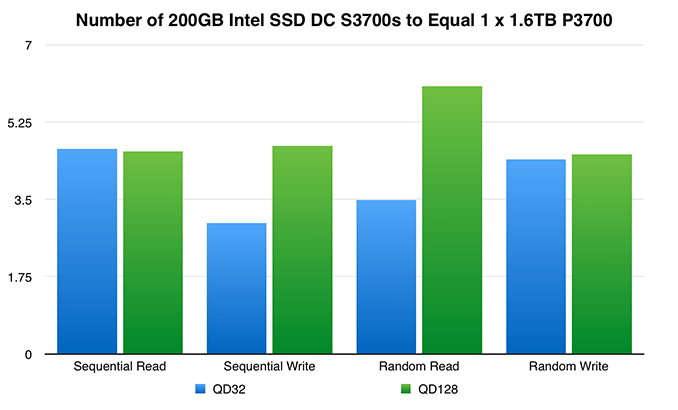 A single P3700 ends up replacing 4 - 6 high performance SATA drives. If you don't need high sustained 4KB random write performance, you can get similar numbers out of the cheaper P3600 and P3500 as well. This is a very big deal.

Once again we see Intel at the forefront of a new wave of SSDs. What I really want to see now however is continued execution. We don't see infrequent blips of CPU architecture releases from Intel, we get a regular, 2-year tick-tock cadence. It's time for Intel's NSG to be given the resources necessary to do the same. I long for the day when we don't just see these SSD releases limited to the enterprise and corporate client segments, but spread across all markets - from mobile to consumer PC client and of course up to the enterprise as well.