ASUS A88X-Pro In The Box

Being the top of the line ASUS A88X product, we should be expecting something more than the average in the box for the A88X-Pro. The downside to this is the price. Because the motherboard is $124, we have had other motherboards in this price range offer next to nothing apart from the basics. It all boils down to how aggressive the pricing of the motherboard is for this segment – in the box contents can add value but only when the margin is there or price is no object.

In the ASUS A88X-Pro we get the following: 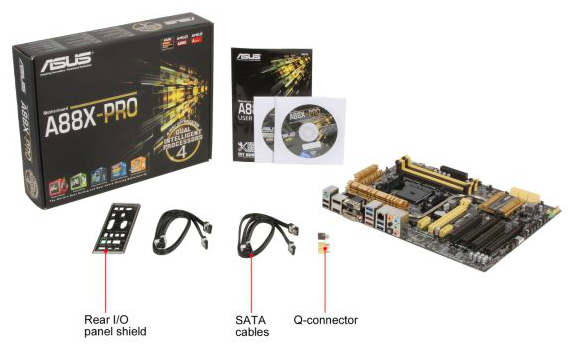 Admittedly this is two more SATA cables than the standard, however when a system offers 8 SATA 6 Gbps connectors it would seem rather tight to offer less than four. I was not expecting a USB 3.0 connector due to the lack of a second USB 3.0 header, but because the system has four USB 2.0 headers I could be forgiven in expecting some tool to take advantage of those, either via a front or rear panel.

Overall our overclocking experience on A88X with our A10-7850K is a bit disappointing. Most motherboards we have tested up until this point find the limit of our CPU early on, and the resulting high temperatures cause the CPU to throttle. 4.2 GHz seems to be the main limit, but the A88X-Pro does at least stretch that a bit to 4.3 GHz in our testing. In fact 4.4 GHz seemed plausible, but the throttling was present during our OCCT test.

One point I would like to make to ASUS would be in automatic overclock options. I enjoy having access to a dynamic scaling utility such as the 4-Way Optimization tool, however by implementing a series of presets to choose from would be beneficial. Something to think about in the future I would imagine.

Using the 4-Way Optimization tool in AI Suite, our system was overclocked to 4.2 GHz: 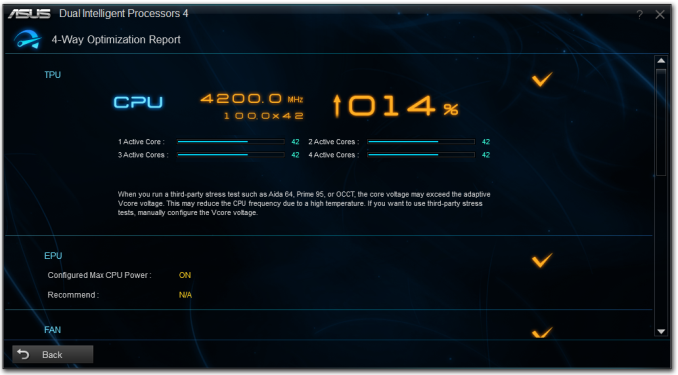 We started our manual overclocking in the BIOS, with the CPU set to 1.1 volts and 4.0 GHz. Given that the stock voltage reading was 1.288 volts, it was no surprise that it took 1.225 volts set in the BIOS to get 4.0 GHz stable. The system was consistently stable to 4.3 GHz, however 4.4 GHz was a step too far:

The 4.4 GHz setting was stable for at least a minute, however a sustained workload gave the following CPU frequency profile over five minutes: 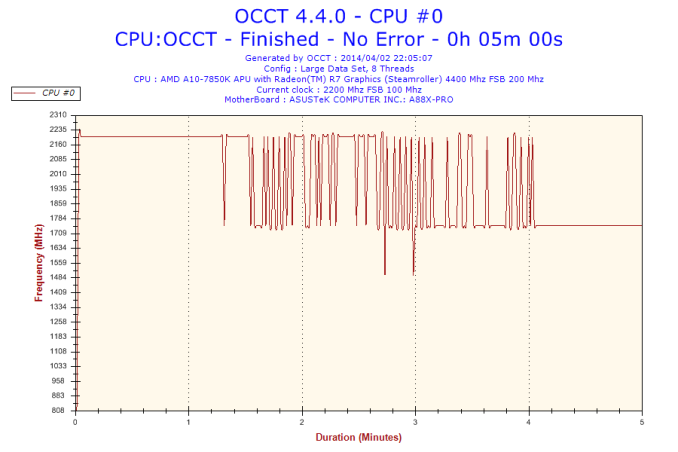