Because the R9 295X2 is for all practical purposes performance-equivalent to a pair of 290X “Uber” mode cards in Crossfire, noise will play a big part in our evaluation here. With AMD charging what amounts to a $300 premium for this card over a pair of 290Xs, the better noise performance AMD can deliver over the 290X CF the more justifiable the premium is. At the same time the 290X CF is an absurdly loud setup due to the high fan speeds required, so it would reflect poorly on AMD if they could not beat it.

Meanwhile since we don’t have any voltage readouts for the R9 295X2, we’ll start off this section with a look at average clockspeeds.

AMD told us that one of their goals for the R9 295X2 was to rival the 290X “Uber” in Crossfire, and to do this they would need to be able to operate with little-to-no throttling. History has shown us that the 290X has the power to run at 1000MHz in virtually all games, but it lacks the cooling capacity to do so unless its fan speeds are greatly increased.

In the case of the R9 295X2, we can safely say that AMD has been able to deliver on their clockspeed promises, which is why the R9 295X2’s performance has been indistinguishable from 290X “Uber”  Crossfire performance. With the exception of our strategy games, both of which throttle at certain points due to power restrictions on both the R9 295X2 and R9 290X, AMD’s latest dual-GPU card is able to maintain 1018MHz on all of our games.

In fact it does so well that we’re unable to determine the card’s base clockspeeds. FurMark bottoms out at 860MHz from power throttling, but try as we might we can’t get it to level out at any other lower clockspeed when introducing throttling scenarios, completely unlike the 290X. AMD’s refusal to publish their base clockspeeds – or even realistic average boost clockspeeds (ala NVIDIA’s boost clock) – continues to disappoint us. But in the case of the R9 295X2 in particular we’re happy to report that the 1018MHz boost clock AMD claims is the clockspeed the card should be able to sustain across all games. 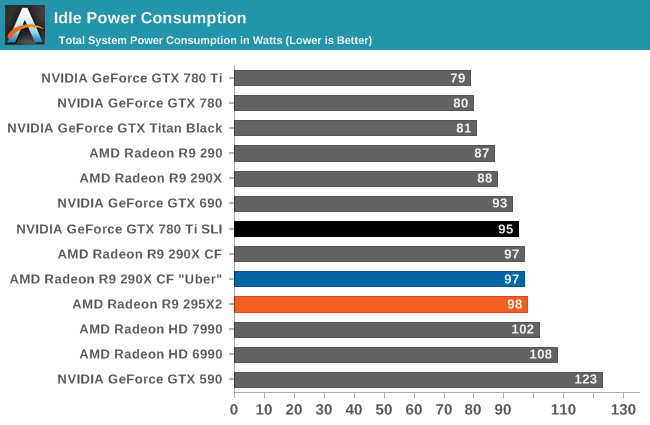 Starting as always with idle power, it’s clear that AMD has been able to integrate a pair of 290Xs on to a single card without significantly altering the power requirements. At 98W at the wall, our 295X2-equipped system draws just 1W more than when we have a pair of 290Xs in, with the final watt being explained by the PCIe switch chip. This is even a slight improvement over the 7990 despite 295X2 having bigger GPUs with additional memory, with AMD’s newer card saving an additional 4W. 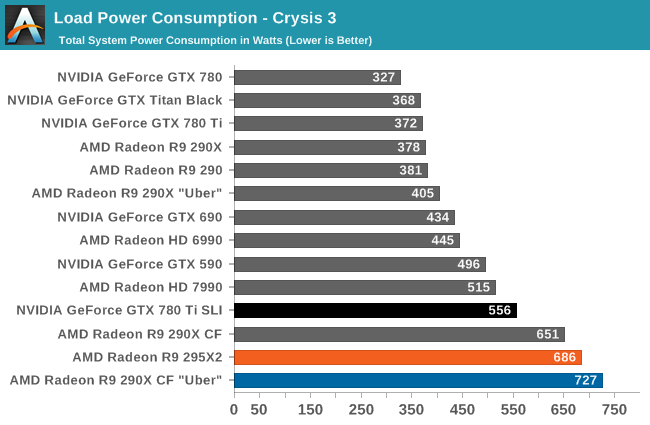 Moving over to load power consumption, what’s also clear is that in building the 295X2 AMD has only done a limited amount of chip binning. Compared to the 290X CF “Uber”, the 295X2 delivers virtually identical performance while drawing 41W less at the wall. To be sure, a 41W savings is nothing to sneeze at, but it also does little to resolve Hawaii’s status as a power-hungry chip. When NVIDIA is delivering better performance yet for 110W less at the wall, there’s no getting around the fact that AMD really did need a 500W budget to bring a pair of Hawaii GPUs on to a single board in this manner.

At the same time this is also a stark reminder that in the absence of newer manufacturing nodes from TSMC, high-end GPUs are primarily power limited. In building the 295X2 AMD was able to significantly increase their dual-GPU card performance, but it comes with a 150W+ power consumption increase as compared to the previous-generation 7990. This is not free performance by any means. 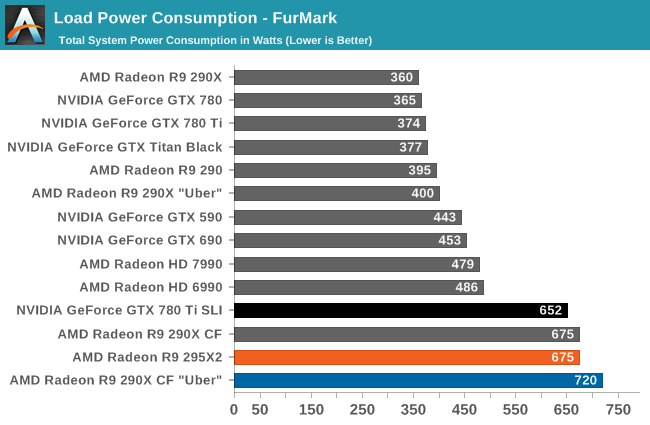 Switching to FurMark, our favorite pathological power test serves to reiterate what we have seen and said earlier. The 295X2 has the performance of a 290X CF setup; it also has the power consumption of a 290X CF setup. 675W at the wall ends up being exactly as much power as a 290X CF setup draws, while saving 55W over the thermally unrestricted 290X CF “Uber” setup. Furthermore in once again comparing it to the 7990 we can see just how much more power the 295X2 can draw than its predecessor, showing us a power consumption increase of 196W at the wall.

Meanwhile it’s interesting to note that while power consumption under Crysis 3 shows the 295X2 and GTX 780 Ti SLI far apart, this test puts them within 23W of each other. Since everyone hits their power limits here, 2 x 250W comes very close to AMD’s 500W limit. 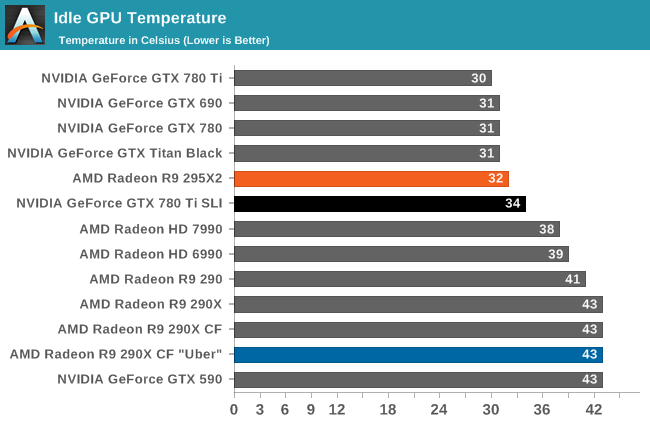 Moving on to temperatures, we can see that AMD’s CLLC performs rather well for itself even under idle. At 32C the 295X2 is roughly on par with most single-card setups, all the while it beats other setups like the 7990 and 290X CF by 5C and 10C respectively. 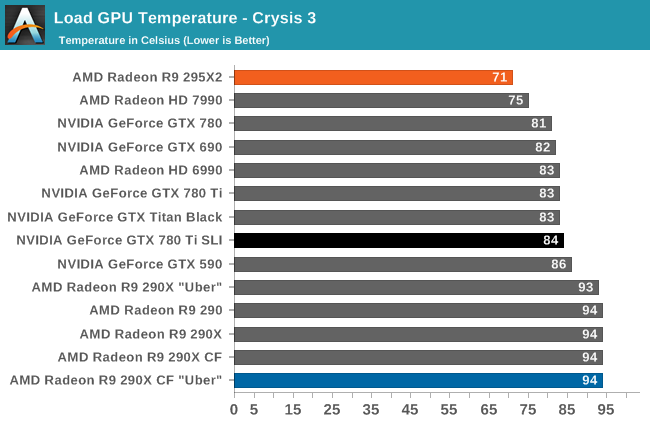 The advantage of using a CLLC for a card like the 295X2 is not just in the amount of raw heat the cooler can collect and dissipate, but what temperatures it can sustain while doing so. At 71C under load the 295X2 is cooler than every other high end card on our charts, including the otherwise respectable 7990. 71C is not all that uncommon for semi-custom and fully-custom open air cooled cards, something we’ve frequently seen over the years, but it’s very rare for a reference card to register this low. It in turn is made all the more impressive due to the fact that the 295X2’s cooling setup is virtually a fully exhaustive cooler, so unlike open air cards that are recycling their hot air this is 71C with many of the benefits traditionally found on a blower type cooler.

It is however important to keep in mind that the 295X2 has a relatively low 75C temperature throttle. So although we’re not throttling under this test (sustaining 1018MHz throughout), we’re only 4C off from reaching that point. Measuring the 120mm fan on the CLLC finds that the fan is operating at its full speed, so the CLLC is operating very close to its own limits, too.

Finally this is why the leakage concept is so important here. At 71C AMD is undoubtedly leaking less power than the 290X CF is at 94C (how much is anyone’s guess at this point), which is part of the reason that the 295X2 is viable in the first place, and combined with the CLLC’s limits is why there is a need for a 75C throttle. 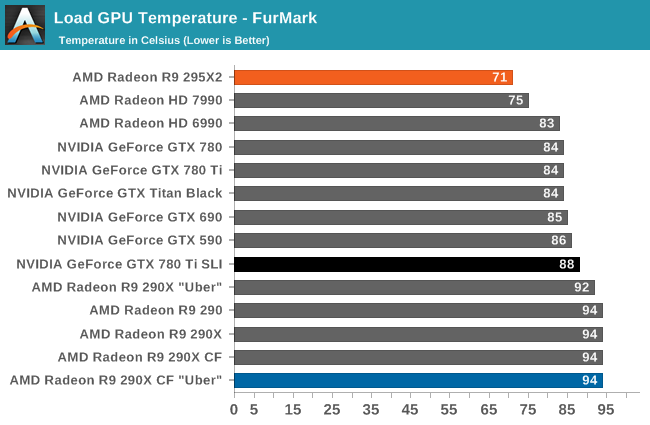 Under FurMark we find our load temperatures unchanged. While FurMark undoubtedly puts a greater load on our 295X2, the card’s power throttle has kept the card from generating too much more in the way of heat, keeping temperatures in check and within the limits of the CLLC. 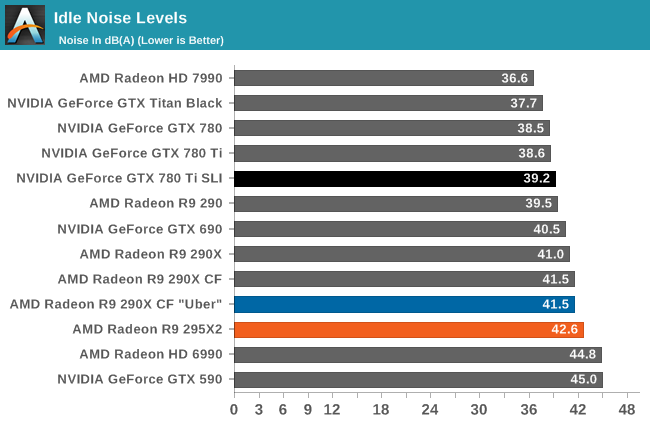 Last but not least we have our look at noise. Next to power consumption, we can see the 295X2’s second greatest weakness is idle noise. At 42.6dB the 295X2 is not particularly bad, but it’s just not particularly good either. It’s 1.1dB louder than the 290X CF, 2.6dB louder than a singular 290X, and significantly louder than the 7990. Both the 120mm CLLC fan and the on-board fans appear to be contributing to the noise here, and without fan controls it’s not possible to further adjust either of them. Though by our own admission it’s also not clear if either fan can even run lower or if this is at their minimum operating speeds.

At the end of the day we don’t believe 42.6dB will be a deal-breaker, and in fact for the kind of systems that many 295X2s will be going in to there’s a good chance it won’t even be the loudest component at idle. But it is not capable of replicating the quiet sub-40dB idle noise levels that some of our best cards can pull off. 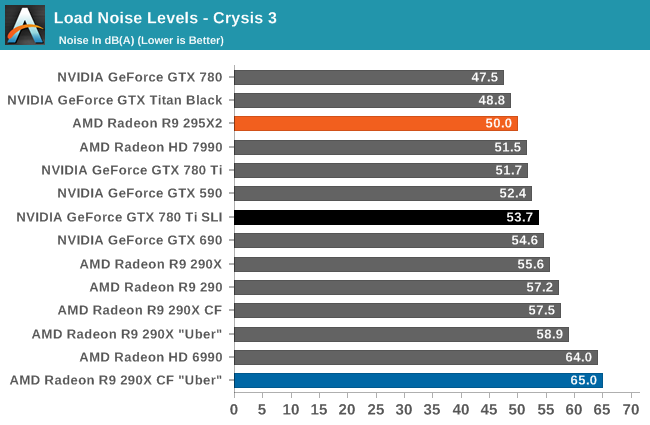 Moving in to load noise on the other hand exposes one of the 295X2’s greatest strengths. At this point the CLLC fan is running at full speed (~1860 RPM) and yet despite that we’re only measuring 50dB of noise. For a 500W card. For a card that delivers as much performance as an AMD setup that otherwise generates a full 15dB more noise.

To both praise and shame AMD, the reference cooler for the 290 series cards should have been better than what we ultimately got. But on the other hand you’d hardly believe that the 295X2 is a card from the same company that brought us the 290 just 6 months ago.  The use of a CLLC is not groundbreaking and it does have some very clear tradeoffs, but the fact that AMD can offer this much performance at just 50dB of noise is music to our ears.

Now with that said, at least under games some of our better dual card setups aren’t too far off. The GTX 780 Ti SLI is just 3.7dB louder and delivers better framerates in this benchmark, so there are tradeoffs to be had and this is a testament to just how capable NVIDIA’s GTX Titan cooler is. But the fact that AMD can deliver this kind of framerate coupled with this low a noise level is still a significant accomplishment. 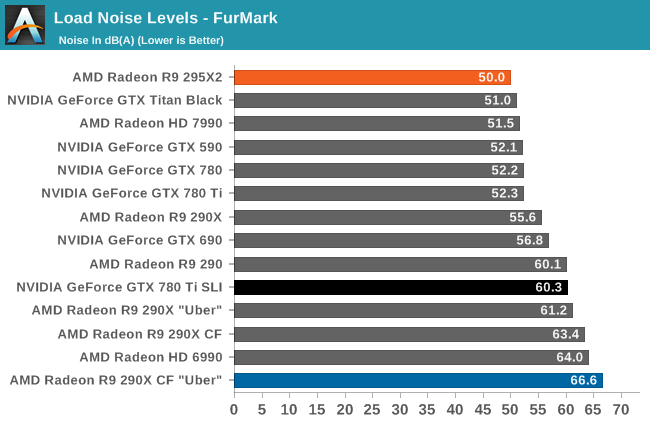 Finally, going with our pathological test case puts the 295X2 in an even better position. Dissipating a full 500W, the 295X2 holds at 50dB when every other card goes to 51dB, 60dB, and even 66dB. This is with little doubt the limit to what AMD’s CLLC can do, but none the less it’s solid proof of just how capable the 295X2 is. Even in our worst case scenario it holds at 50dB, delivering top tier performance all the while generating far less noise in the process.

In the end it’s difficult to avoid heaping praise on to AMD for the 295X2’s cooler. To be abundantly clear this rides heavily on the fact that the R9 295X2 is the only card in this review that is using a CLLC – everyone is a blower or open air cooler – but there is such a thing as having the sense to push boundaries when one needs to. Which is to say that this isn’t as much a case of AMD innovating as it is AMD having the sense to turn to Asetek for their CLLC, but regardless of the source of the parts the results speak for themselves.

At the same time however, while AMD is doing a fantastic job of moving nearly 500W of heat it bears repeating that we’re still in a situation where AMD needs to move 500W of heat in the first place. Does the performance justify the power? Probably. But with the R9 295X2 AMD is treading new ground when it comes to power consumption, and there are other cost and cooling tradeoffs to be had for such high power consumption.