Razer appears quite proud of their new Green and Orange switches and that can be seen by checking the page dedicated to them into their website. They even offer to "share" their new switches with other manufacturers looking to design gaming keyboards. However, we would not really describe these switches as unique or, at the very least, Razer's own creation. Even though Razer's name is clearly printed on them, there is a logo right beneath it: 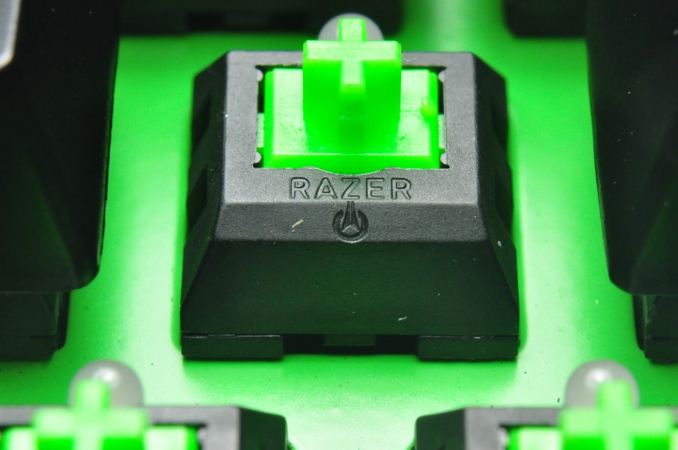 Although that tiny logo looks like it came out from Star Trek, it actually belongs to Kaihua Electronics (also known as Kailh), a Chinese manufacturer specializing in switches, so it goes without saying that they are the OEM behind Razer's Green and Orange keyboard switches. They are far from a new company; Kailh has been making switches for over two decades, including keyboard switches. However, if someone compares their products to those from Cherry, it becomes apparent that their keyboard-related products are a direct copy of Cherry's designs. This is not illegal, however, as Cherry's patent on mechanical keyboard switches dates back in the early 1980's and thus expired well over a decade ago.

There is no reason that a copy cannot be just as good as or even better than the original. Kailh's reputation however isn't the greatest. Razer claims that their switches not only are just as good as the originals, but they have extended their life expectancy by 10 million keystrokes. Unfortunately, although we do have access to equipment that could be used for durability testing, such equipment's top speed is limited to about one actuation per 0.8 seconds. This means that 60 million keystrokes necessitates a minimum of 556 days to test a single button.

If you were to examine the specifications of Razer's new switches, it becomes apparent that their Green and Orange switches are almost identical to the Blue and Brown switches from either Cherry or Kailh respectively. In terms of performance, Razer only reduced the actuation travel from 2.2mm down to 1.9mm (Blue vs Green). The difference is even smaller for the Orange switch, as the Brown switch actuates at 2.0mm. If we were to consider the tolerance ratings, we would end up with a graph like this:

As you can see, the Green switch does actuate higher and has tighter tolerance rating than the original Cherry MX Blue switch, but its operational range is almost entirely within that of the original. The operational range of the Orange switch falls entirely into the tolerance range of the original Kailh Brown switch as well. Even if we discard the tolerance and assume that the actuation distance is exactly at the advertised point, a difference of 0.3mm (about 0.0118 in) is miniscule. We can hardly see how such a difference would help gamers. Assuming a speed of eight keystrokes per second, each keystroke takes 125 ms and thus the average travel speed of a key is 3.125 ms per mm. Therefore, Razer just saved you from 9.375 milliseconds, which is not even a hundredth of a second. It would be hard to justify that this is enough to turn defeat into victory while gaming. Moreover, remember: the difference between Razer's Orange switch and the original Brown is 0.1mm, so you need to divide most of the aforementioned figures by three.

The company also claims that the have a "precision manufacturing process for tighter tolerance". Although we cannot possibly validate such a claim, it is true that the tolerance of the keys on the sample that we received was minimal; all typical keys would actuate between 1.89mm and 1.92mm from their start point, which is either an astonishing display of quality control or a remarkable stroke of luck. On the other hand, all keys also required between 57 cN and 60 cN to actuate, which is much closer to the rating of the Blue switches (58.9 cN) rather than Razer's rating of 49 cN.

We have to stress that Razer's switches are not bad or in any way inferior to their original counterparts, the Blue and Brown designs that they were derived from. It is very difficult however to justify that Razer's improvements are worthy of such intense advertising and that they can actually make any kind of difference for gamers. If we were to make an educated guess, Razer simply approached Kailh because they were fed up with Cherry, who not only is unable to cover the demand for mechanical switches but also sign exclusive deals with some of their customers over new products.

As Razer is a company that wants to stay on top of things, it was to be expected that they would seek another supplier, especially if that supplier could also manufacture unique products for them. There is nothing reprehensible about it; we are actually surprised that they did not make such a move even sooner. Whether the change is really noteworthy is an entirely different matter.