The numerical differences between Kaveri and Richland are easy enough to rattle off – later in the review we will be discussing these in depth – but at a high level AMD is aiming for a middle ground between the desktop model (CPU + discrete graphics) and Apple’s Mac Pro dream (offloading compute onto different discrete graphics cards) by doing the dream on a single processor. At AMD’s Kaveri tech day the following graph was thrown in front of journalists worldwide: 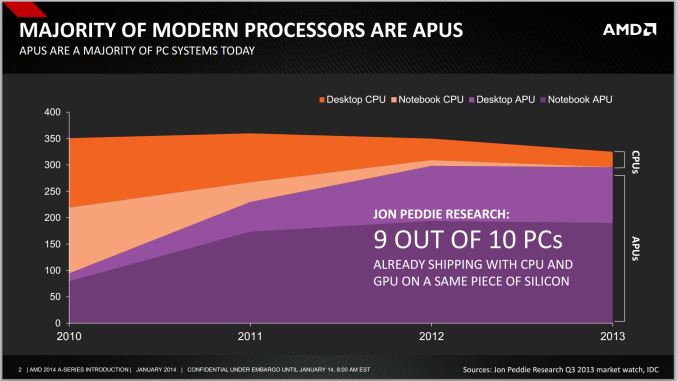 With Intel now on board, processor graphics is a big deal. You can argue whether or not AMD should continue to use the acronym APU instead of SoC, but the fact remains that it's tough to buy a CPU without an integrated GPU.

In the absence of vertical integration, software optimization always trails hardware availability. If you look at 2011 as the crossover year when APUs/SoCs took over the market, it's not much of a surprise that we haven't seen aggressive moves by software developers to truly leverage GPU compute. Part of the problem has been programming model, which AMD hopes to address with Kaveri and HSA. Kaveri enables a full heterogeneous unified memory architecture (hUMA), such that the integrated graphics topology can access the full breadth of memory that the CPU can, putting a 32GB enabled compute device into the hands of developers.

One of the complexities of compute is also time: getting the CPU and GPU to communicate to each other without HSA and hUMA requires an amount of overhead that is not trivial. For compute, this comes in the form of allowing the CPU and GPU to work on the same data set at the same time, effectively opening up all the compute to the same task without asynchronous calls to memory copies and expensive memory checks for coherency. 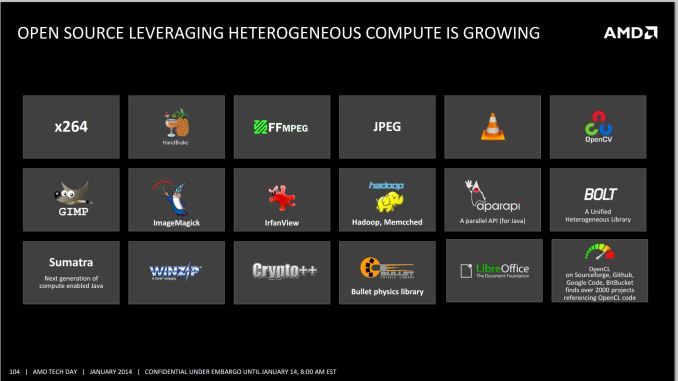 The issue AMD has with their HSA ecosystem is the need for developers to jump on board. The analogy oft cited is that on Day 1, iOS had very few apps, yet today has millions. Perhaps a small equivocation fallacy comes in here – Apple is able to manage their OS and system in its entirety, whereas AMD has to compete in the same space as non-HSA enabled products and lacks the control. Nevertheless, AMD is attempting to integrate programming tools for HSA (and OpenCL 2.0) as seamlessly as possible to all modern platforms via a HSA Instruction Layer (HSAIL). The goal is for programming languages like Java, C++ and C++ AMP, as well as common acceleration API libraries and toolkits to provide these features at little or no coding cost. This is something our resident compute guru Rahul will be looking at in further detail later on in the review.

On the gaming side, 30 FPS has been a goal for AMD’s integrated graphics solutions for a couple of generations now. 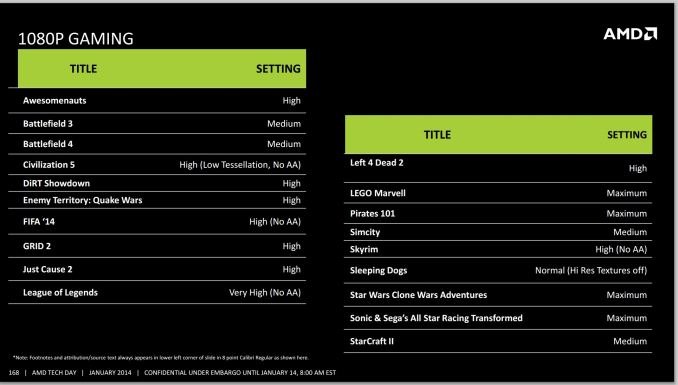 Arguably we could say that any game should be able to do 30 FPS if we turn down the settings far enough, but AMD has put at least one restriction on that: resolution. 1080p is a lofty goal to hold at 30 FPS with some of the more challenging titles of today. In our testing in this review, it was clear that users had a choice – start with a high resolution and turn the settings down, or keep the settings on medium-high and adjust the resolution. Games like BF4 and Crysis 3 are going to tax any graphics card, especially when additional DirectX 11 features come in to play (ambient occlusion, depth of field, global illumination, and bilateral filtering are some that AMD mention).