The Mac Pro’s CPU options have ballooned at times during its 7 year history. What started with four CPU options grew to six for the early 2009 - mid 2010 models. It was also during that time period that we saw an expansion of the number of total core counts from 4 up to the current mix of 4, 6, 8 and 12 core configurations.

What’s particularly unique about this year’s Mac Pro is that all configurations are accomplished with a single socket. Moore’s Law and the process cadence it characterizes leave us in a place where Intel can effectively ship a single die with 12 big x86 cores. It wasn’t that long ago where you’d need multiple sockets to achieve the same thing.

While the CPU moved to a single socket configuration this year, the Mac Pro’s GPU went the opposite direction. For the first time in Mac Pro history, the new system ships with two GPUs in all configurations. I turned to Ryan Smith, our Senior GPU Editor, for his help in roughly characterizing Mac Pro GPU options over the years.

Since the Mac Pro GPU offerings were limited to 2 - 3 cards per generation, it was pretty easy to put together comparisons. We eliminated the mid range configuration for this comparison and only looked at scaling with the cheapest and most expensive GPU options each generation. 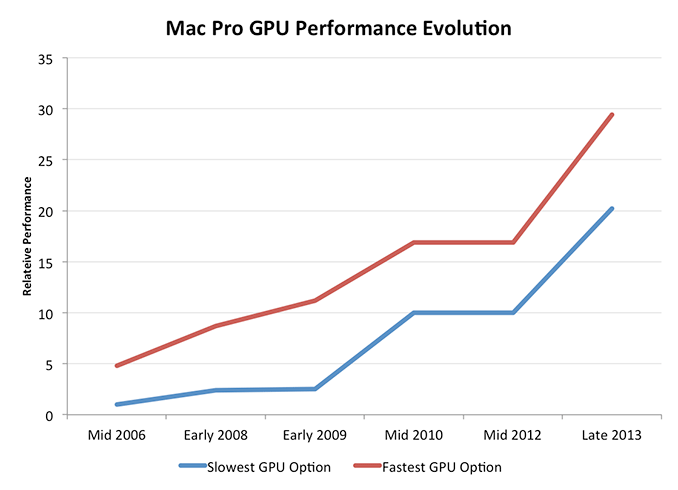 Now we’re talking. At the low end, Mac Pro GPU performance improved by 20x over the past 7 years. Even if you always bought the fastest GPU possible you'd be looking at a 6x increase in performance, and that's not taking into account the move to multiple GPUs this last round (if you assume 50% multi-GPU scaling then even the high end path would net you 9x better GPU performance over 7 years).

Ryan recommended presenting the data with a log scale as well to more accurately depict the gains over time: 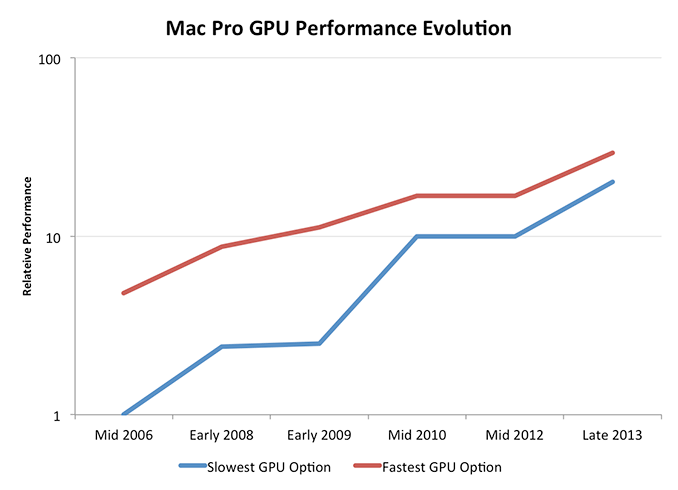 Here you see convergence, at a high level, between the slowest and fastest GPU options in the Mac Pro. Another way of putting it is that Apple values GPU performance more today than it did back in 2006, so even the cheapest GPU is a much higher performing part than it would be.

If you’re a GPU company (or a Senior GPU Editor), this next chart should make you very happy. Here I’m comparing relative increases in performance for both CPU and GPU on the same graph: 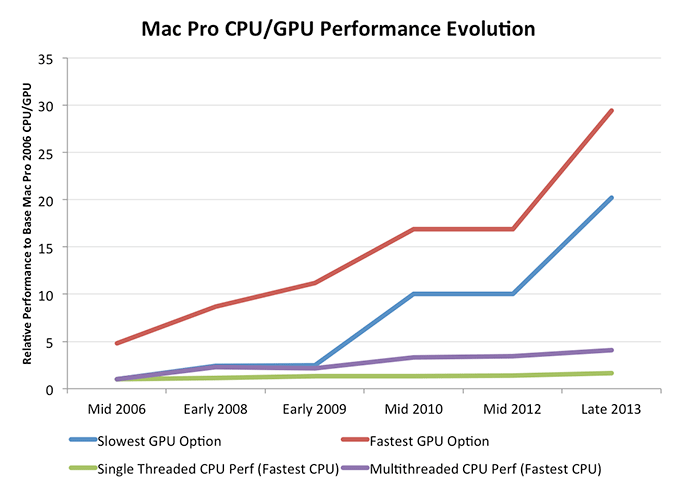 This is the crux of the Mac Pro story. It’s not just about a faster CPU, but rather a true shift towards GPU compute. In a little over a year, Apple increased the GPU horsepower of the cheapest Mac Pro by as great of a margin as it did from 2006 - 2012. The fastest GPU option didn’t improve by quite as much, but it’s close. 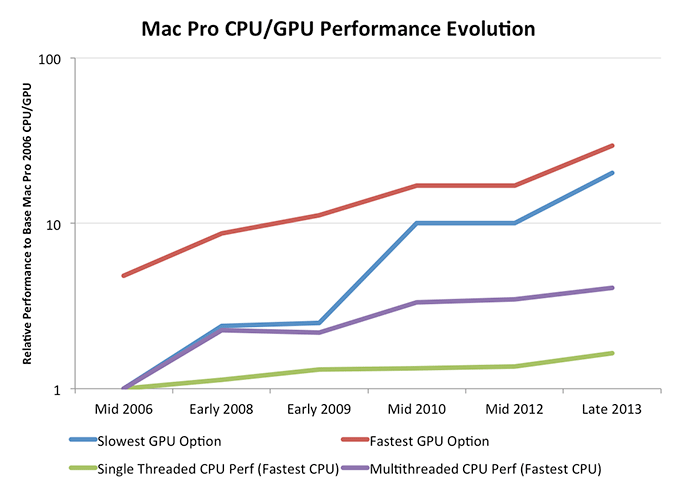 Looking at the same data on a log scale you’ll see that the percentage increase in GPU performance is slowing down over time, much like what we saw with CPUs, just to a much lesser extent. Note that this graph doesn't take into account that the Late 2013 Mac Pro has a second GPU. If we take that into account, GPU performance scaling obviously looks even better. Scaling silicon performance is tough regardless of what space you’re playing in these days. If you’re looking for big performance gains though, you’ll need to exploit the GPU.

The similarities between what I’m saying here about GPU performance and AMD’s mantra over the past few years aren’t lost. The key difference between Apple’s approach and those of every other GPU company is that Apple spends handsomely to ensure it has close to the best single threaded CPU performance as well as the best GPU performance. This is an important distinction, and ultimately the right approach.