The Mac Pro’s thermal core makes a lot of sense from an area efficiency standpoint as the chances that you have all three processors in the system (Xeon CPU + dual AMD FirePro GPUs) running at max speed at the same time is highly unlikely. By having all three players share one large heatsink Apple can optimize for the most likely usage scenarios where at most one processor is running at close to max TDP. From the moment the system was introduced however I was curious to see if its thermal design could deal with all three processors going full tilt. I decided to test both scenarios out.

The vast majority of the time the Mac Pro’s single fan spins at a paltry 769 RPM. At this speed the Mac Pro is virtually silent. I have a Promise Pegasus R6 Thunderbolt chassis with four 3.5” 7200 RPM hard drives inside. The Pegasus sits four feet away from my Mac Pro and at idle the hum of its drives drowns out the idle fan noise of the Mac. 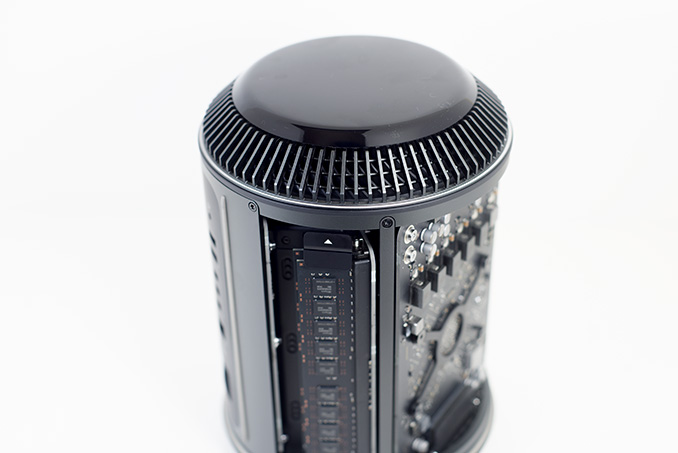 Even running heavily threaded CPU benchmarks does nothing to impact fan speed. It's not until you run a prolonged workload that you can hear an increase in noise from the Mac Pro. I ran FurMark under OS X in parallel with a relatively heavy 4K render in Final Cut Pro. I was rendering a 20 minute 4K project with two effects applied across the entire timeline. The basic render used up 4 - 8 threads, while the effects ensured the compute GPU had some work to do. FurMark obviously kept the display GPU busy. After around 25% of the rendering task was complete the Mac Pro’s fan smoothly scaled up to 1400 RPM, then 1600 RPM and finally stopping at what I believe is full speed: 1900 RPM.

I crudely measured noise sitting at my desk, approximately 18” away from the Mac Pro at all of these points:

System noise isn’t an issue the vast majority of the time. Even if you’re running for short bursts with everything cranking away on a problem. It’s only under prolonged use of the CPU + both GPUs that the fan has to spin up this high. I quit FurMark and kept the FCP render going, which brought system power down from ~380W to ~326W. It also slowly dropped fan speed from 1900 RPM down to 1500 RPM before smoothly alternating between 1200 RPM and 1450 RPM. The way the Mac Pro’s fan ramps is actually just as important as its ability to remove heat. There are no dramatic increases in speed, just an incredibly smooth curve that the Pro’s fan moves up and down.

The system never gets annoyingly loud, it just varies between silent and calmly reminding you that there’s a large fan inside. Even at full bore the Mac Pro’s fan noise is more pleasant than harsh. It’s not magic, just good system design coupled with the fact that even with a pair of D700s Apple went a bit conservative on GPU speed. Had this been a system capable of pulling 800W at the wall, we’d be having a different discussion about noise.

My next task was to see what actually happens in this worst case scenario. If you’re running all of the parts at full tilt, are any of them going to throttle? I have to work pretty hard to get the fan to spin up under OS X, but in Windows it’s a lot easier since I can just toss a single multi-GPU workload at the problem.

I started out by running LuxMark, an OpenCL workload, on both GPUs as well as a multithreaded 7-Zip benchmark on all of the CPU cores. I monitored both CPU and GPU frequencies. The result was no throttling across the board:

Getting an accurate reading on GPU frequencies from Tahiti based GPUs ends up being harder than I expected, but I saw what Ryan reminded me is typical behavior where the GPUs alternate between their 650MHz base clock and 850MHz max turbo. We don’t have good tools to actually measure their behavior in between unfortunately.

The same was true for the CPU. Even with all 12 cores taxed heavily, I never saw any drops below the CPU’s 2.7GHz base clock.

Next I tried a heavier workload on the CPU: a H.264 video encode. Here I just ran the x264 5.01 benchmark in parallel with the LuxMark workload. Once again, I saw no drop in CPU or GPU clocks although I believe I was approaching the limits of where that would hold true. The system was pulling an average of 410W at that point, with peak power draw at 429W. 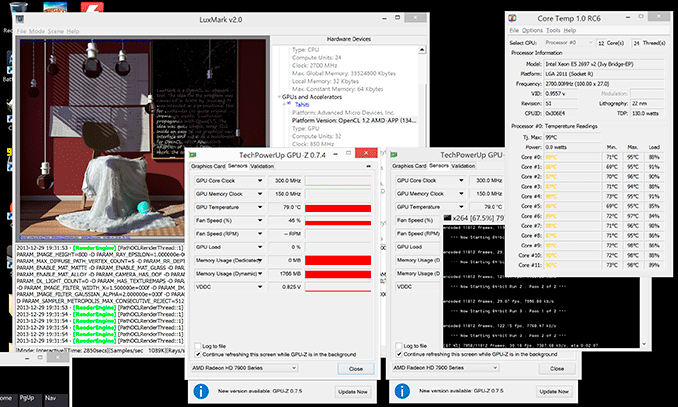 If you’re wondering, there was little to no impact on the x264 benchmark from having LuxMark run in the background. The first rendering pass took about a 3% hit, likely due to the CPU not being able to turbo as high/at all, but the second heavily threaded pass was on par with my standalone run without LuxMark in the background. LuxMark on the other hand saw around a 14% reduction in performance, from 2040K samples per second down to 1750K when run in parallel with the x264 test. We’re still talking about two extremely compute intensive tasks, the fact that I can run both with little performance reduction is an example of the sort of performance scaling that’s possible if you leverage all of the compute in the Mac Pro.

So far I wasn’t surprised by the platform’s behavior. The Mac Pro’s thermal core and fan was enough to handle a real world workload without throttling. But what about a power virus? For this I ran a combination of FurMark at 2560 x 1440 and Prime95 (in-place large FFTs) across all GPUs and CPU cores. 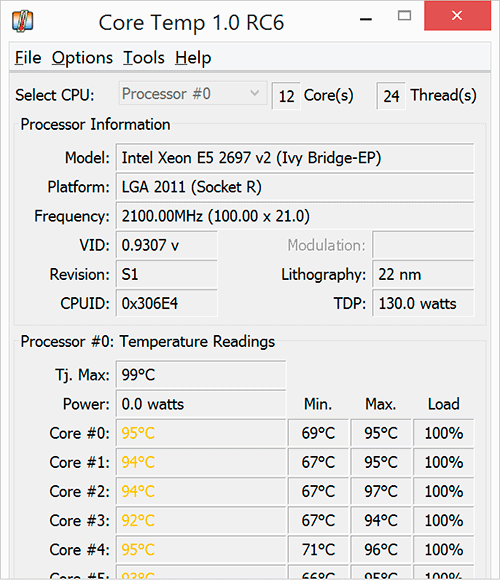 The GPUs peaked at 97C, which is pretty much as high as a 28nm Tahiti should ever go. The CPU hit a similar temperature, with most cores hovering around 95C. GPU clocks seemed ok, with both GPUs running between 650 - 850MHz (base - boost). The CPU on the other hand dropped down to 2.1GHz (I even saw a short excursion down to 2GHz). Average power while running this workload was 437W, peaking at 463W before CPU throttling kicked in. If you plot out a graph of power vs. time you can see the CPU throttling kick in during the workload. 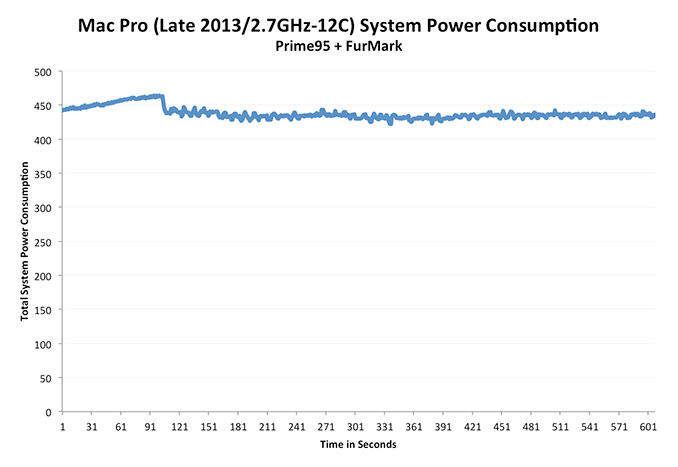 I have to stress that I haven’t been able to get this to happen in any normal workload, only what’s effectively a power virus for the GPUs and something quite unrealistic for the CPUs. Either way it shows us the upper limit of what the thermal core can do.

Idle power consumption is down and power efficiency under load is way better than the early 2009 Mac Pro I have here. As far as I can tell, max power consumption for either compute system (CPU alone or dual GPUs alone) is around 300 - 320W. With both subsystems combined you'll get the 437W figure I talked about earlier. 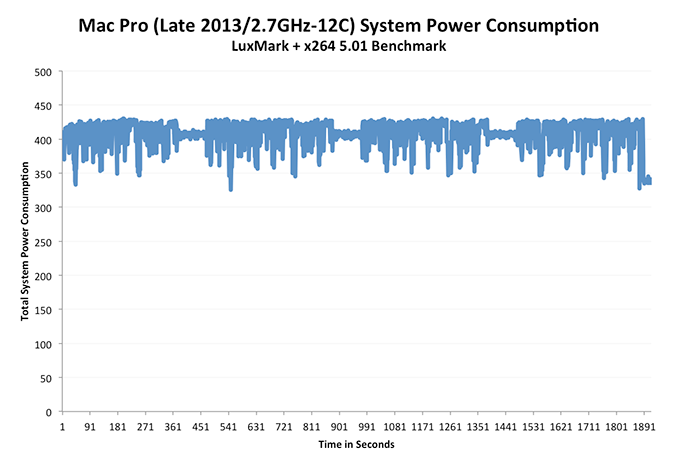 You don't even need a power virus to get there. Running two realistic workloads that are heavy enough won't get you up to the 463W point where I saw throttling, but it'll get you close to the max average power I recorded on the Mac Pro.