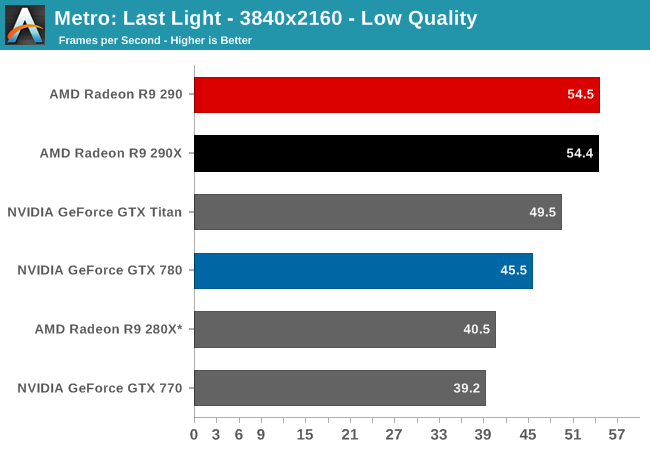 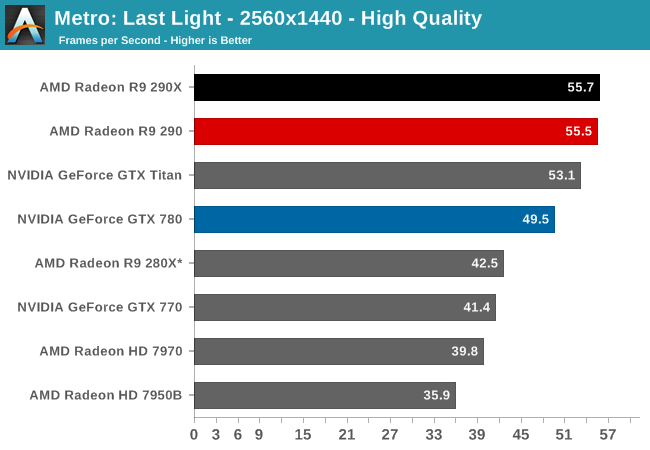 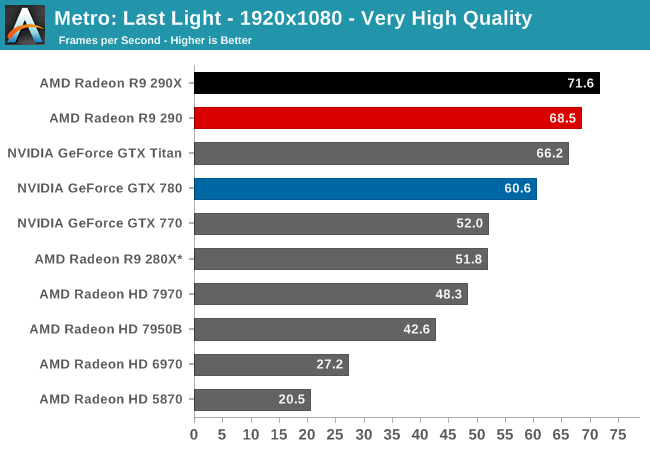 For the bulk of our analysis we’re going to be focusing on our 2560x1440 results, as monitors at this resolution will be what we expect the 290 to be primarily used with. A single 290 may have the horsepower to drive 4K in at least some situations, but given the current costs of 4K monitors that’s going to be a much different usage scenario. The significant quality tradeoff for making 4K playable on a single card means that it makes far more sense to double up on GPUs, given the fact that even a pair of 290Xs would still be a fraction of the cost of a 4K, 60Hz monitor.

With that said, there are a couple of things that should be immediately obvious when looking at the performance of the 290.

To get right to the point, because of AMD’s fan speed modification the 290 doesn’t throttle in any of our games, not even Metro or Crysis 3. The 290X in comparison sees significant throttling in both of those games, and as a result once fully warmed up the 290X is operating at clockspeeds well below its 1000MHz boost clock, or even the 290’s 947MHz boost clock. As a result rather than having a 5% clockspeed deficit as the official specs for these cards would indicate, the 290 for all intents and purposes clocks higher than the 290X. Which means that its clockspeed advantage is now offsetting the loss of shader/texturing performance due to the CU reduction, while providing a clockspeed greater than the 290X for the equally configured front-end and back-end. In practice this means that 290 has over 100% of 290X’s ROP/geometry performance, 100% of the memory bandwidth, and at least 91% of the shading performance.

So in games where we’re not significantly shader bound, and Metro at 2560 appears to be one such case, the 290 can trade blows with the 290X despite its inherent disadvantage. Now as we’ll see this is not going to be the case in every game, as not every game GPU bound in the same manner and not every game throttles on the 290X by the same degree, but it sets up a very interesting performance scenario. By pushing the 290 this hard, and by throwing any noise considerations out the window, AMD has created a card that can not only threaten the GTX 780, but can threaten the 290X too. As we’ll see by the end of our benchmarks, the 290 is only going to trail the 290X by an average of 3% at 2560x1440.

Anyhow, looking at Metro it’s a very strong start for the 290. At 55.5fps it’s essentially tied with the 290X and 12% ahead of the GTX 780. Or to make a comparison against the cards it’s actually priced closer to, the 290 is 34% faster than the GTX 770 and 31% faster than the 280X. AMD’s performance advantage will come crashing down once we revisit the power and noise aspects of the card, but looking at raw performance it’s going to look very good for the 290.