With the Tahiti based 7970GE, we saw AMD push some very high voltages when boosting in order to hit their 1050MHz clockspeed targets. With 280X on the other hand they can back off at least a bit, which should help real world power consumption some.

On both our stock and factory overclocked 280X cads we see a boost voltage of 1.2v, which as expected is a bit lower than the 1.218v the 7970GE drew under the same conditions.

We also have a quick look at clockspeeds while gaming, although there’s little to report here. Without the ability to see the intermediate clockspeeds on 280X we can only tell whether it’s boosting or not. In every game on both 280X cards, these cards are always in a boost state. 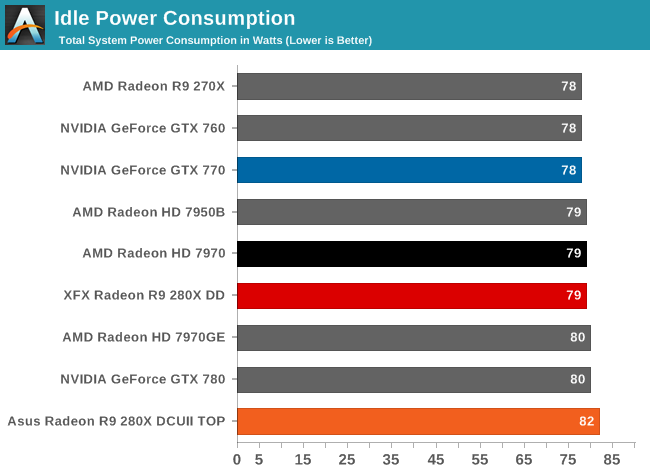 One of the advantages of our new testbed is that IVB-E and the testbed as a whole draw a lot less power under load and idle. This makes it easier to isolate video card power consumption from the rest of the system, giving us more meaningful results.

In this case though there are no surprises to be found with idle power consumption given just how similar all of these cards are while idling. 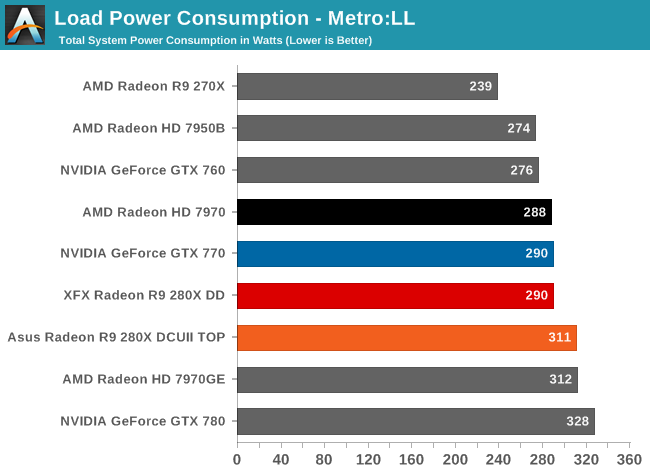 Up next is our new gaming power load test, for which we’re using Metro: Last Light. This was initially calibrated against a GTX 780, in which we found that Metro is both highly repeatable, runs long enough (when looped) to fully exercise a video card, and the load it puts on video cards as a percentage of allowable TDP is considerably average among all games.

To that end Metro paints an interesting picture of power consumption for the 280X. Despite its identical to the 7970GE TDP of 250W, real power consumption is down versus that card, and at least at the wall is identical to the 230W GTX 770 (not that NVIDIA and AMD measure TDP in the same way). What this tells us is that alongside their similar on average performance, the GTX 770 and 280X also draw similar amounts of power under gaming workloads.

Meanwhile Asus’s 280X draws more power, closer to a 7970GE, but this is not unexpected for a factory overclock. 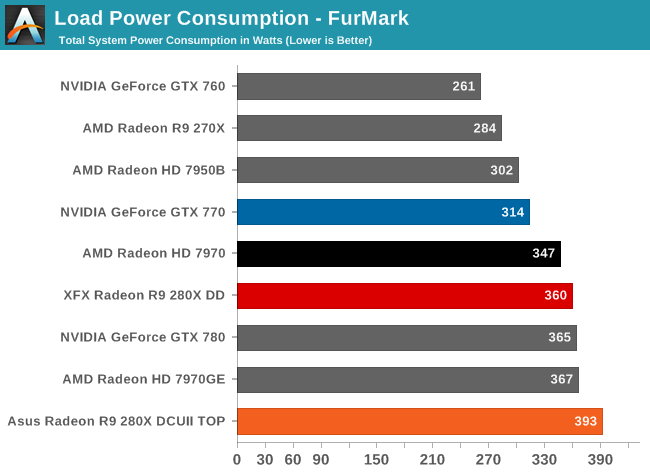 FurMark on the other hand, being the TDP buster that it is, paints a different picture of the situation. The 280X can generate and sustain a much higher power workload than the comparable GTX 770, and still more yet than the original 7970. FurMark isn’t a game and that’s why we primarily use it as a diagnostic tool as opposed to a real world test, but it does lend credit to the fact that when pushed to its limits 280X is still a high TDP part.

At the same time because FurMark is such a consistent TDP test, the outcome of this test leads us to believe that the Asus 280X isn’t just overclocked, but Asus has also increased their TDP/PowerTune limits to avoid bottlenecking there. The power consumption here is consistent with the XFX card having its PowerTune limit turned up, which implies that the Asus card is closer to a 300W card under maximum load. The gaming performance is very good as we’ve seen, but there is a cost. 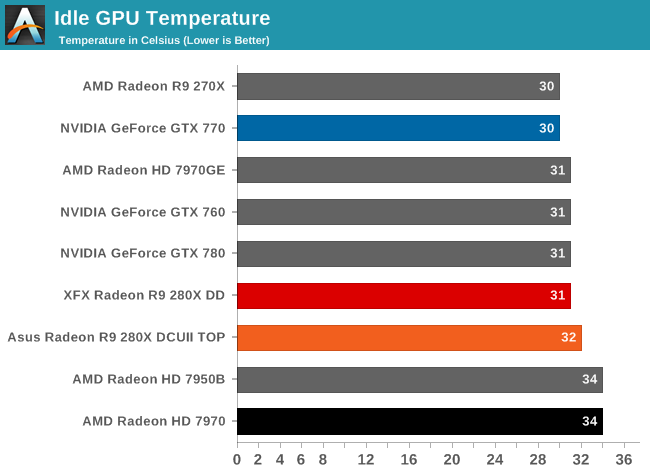 Like most open air coolers, our 280X cards do well enough here. 31C-32C is where most cards will idle at. 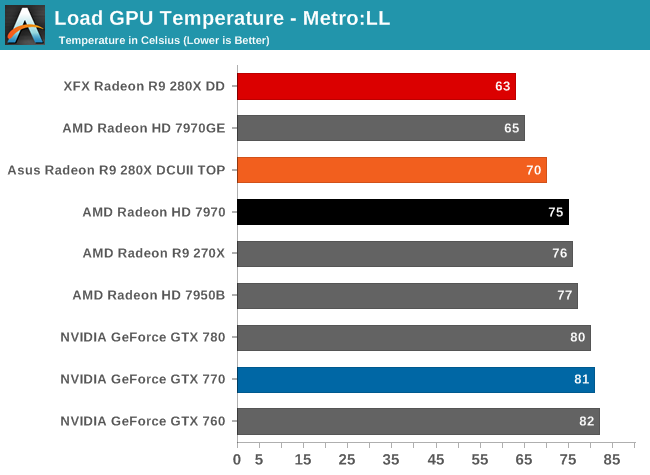 Of all of the Tahiti cards in this article, it’s our XFX 280X that delivers the best temperatures under load. 63 is downright chilly for a 250W card, indicating the card has plenty of thermal headroom.  The Asus card by comparison doesn’t fare quite as well, but we don’t even bat an eye until we hit 80C.

It’s worth noting that both cards also do well against the GTX 700 series here, though this is entirely down to the use of open air coolers. As good as these coolers are you won’t be stuffing either card in a cramped case with limited ventilation; for that you need a blower. 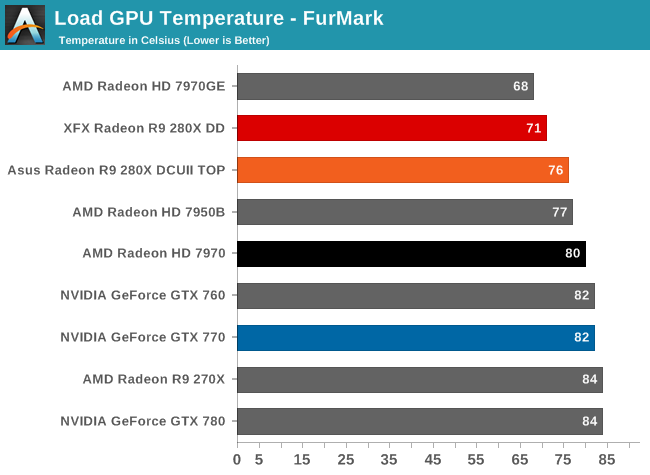 As to be expected FurMark drives up our temperatures further. The XFX 280X is no longer our coolest card overall – that goes to the Tahiti based 7970GE – but of the two 280X cards it’s still the cooler one. The Asus meanwhile reaches 76C, which is still a reasonable temperature but it does mean the card doesn’t have a ton of thermal headroom left on its default fan curve. Though if our suspicions are right about the Asus card operating at a higher TDP, then this would at least explain in part the higher temperatures. 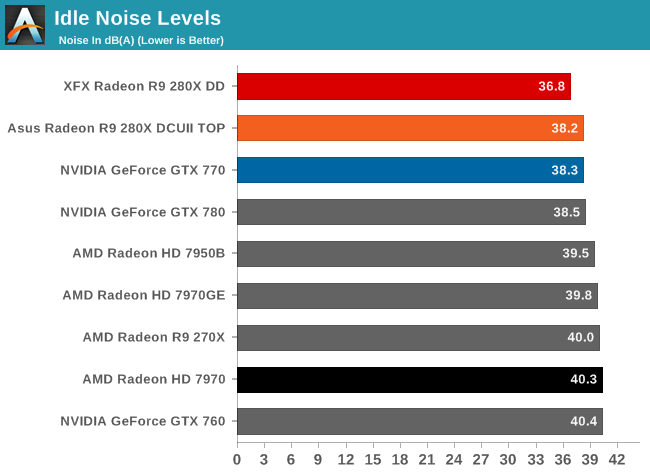 With this being the first article on our new testbed we re-ran the XFX result thrice to make sure we weren’t making any errors, but indeed these results are accurate. Whereas every other card dropped off at around 38dB the XFX 280X bested them with 36.8dB. Even among open air coolers this is a very impressive card at idle. In comparison the Asus is merely average in its near-silence. 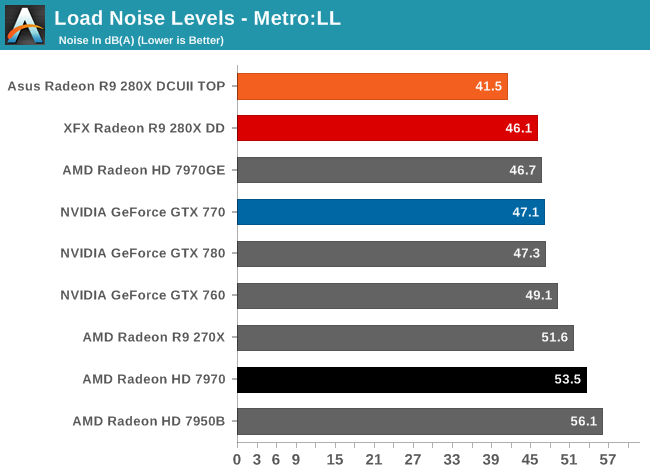 Once we start looking at load noise levels however, the picture changes completely. As impressive as the XFX card was at idle, it doesn’t begin to compare to the Asus card under load. We have a card that’s channeling nearly 250W of heat out and away on a sustained basis, and yet for all of that work it generates just 41.5dB(A) of noise on our testbed. This is simply absurd in the most delightful fashion. Most of the cards in our data collection idle at just 2dB lower than this, never mind noise under load. As a result this is incredibly close to being functionally silent; in the case of our testbed the Asus card isn’t even the principle noise source when it’s under load. 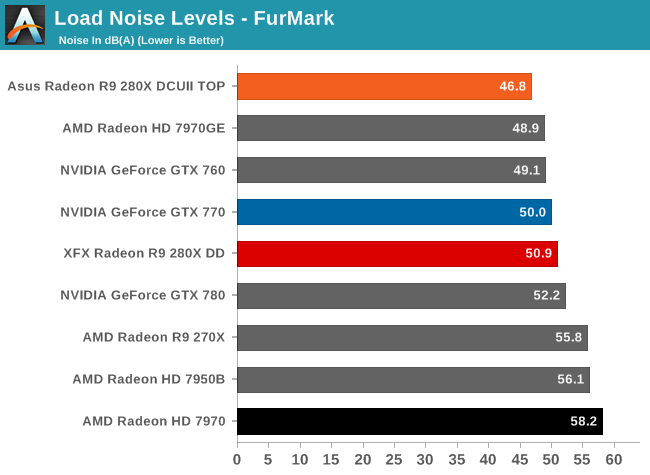 Last, but not least we have noise under FurMark. Although the Asus eventually has to ramp up and leave it’s low-40s comfort zone, at 46.8dB it’s still the quietest card around by 2dB(A). The XFX 280X meanwhile is merely average, if not a tinge worse for an open air cooler. 50.9dB(A) is plenty reasonable, it just pales in comparison to the Asus card.