Chances are that any gamer looking at an IVB-E system is also considering a pretty ridiculous GPU setup. NVIDIA sent along a pair of GeForce GTX Titan GPUs, totalling over 14 billion GPU transistors, to pair with the 4960X to help evaluate its gaming performance. I ran the pair through a bunch of games, all at 1080p and at relatively high settings. In some cases you'll see very obvious GPU limitations, while in other situations we'll see some separation between the CPUs.

I haven't yet integrated this data into Bench, so you'll see a different selection of CPUs here than we've used elsewhere. All of the primary candidates are well represented here. There's Ivy Bridge E and Sandy Bridge E of course, in addition to mainstread IVB/SNB. I threw in Gulftown and Nehalem based parts, as well as AMD's latest Vishera SKUs and an old 6-core Phentom II X6. 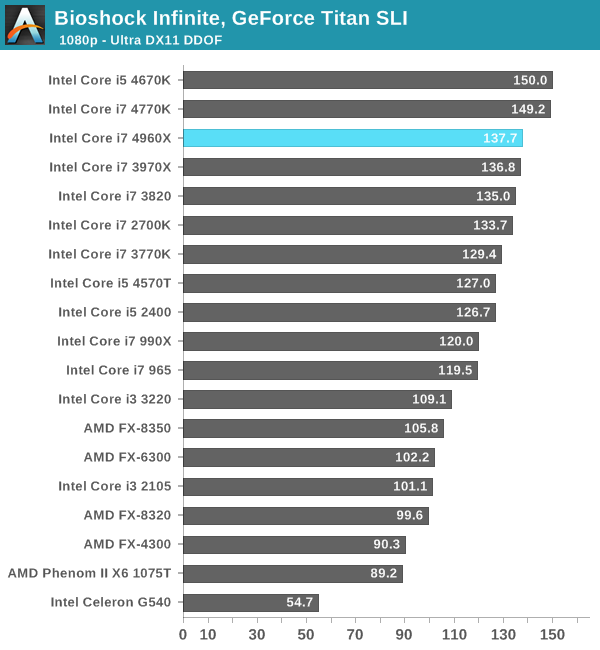 We're going to see a lot of this I suspect. Whenever we see CPU dependency in games, it tends to manifest as being very dependent on single threaded performance. Here Haswell's architectural advantages are appearent as the two quad-core Haswell parts pull ahead of the 4960X by about 8%. The 4960X does reasonably well but you don't really want to spend $1000 on a CPU just for it to come in 3rd I suppose. With two GPUs, the PCIe lane advantage isn't good for much.

Metro: Last Light is the latest entry in the Metro series of post-apocalyptic shooters by developer 4A Games. Like its processor, Last Light is a game that sets a high bar for visual quality, and at its highest settings an equally high bar for system requirements thanks to its advanced lighting system. We run Metro: LL at its highest quality settings, tesselation set to very high and with 16X AF/SSAA enabled. 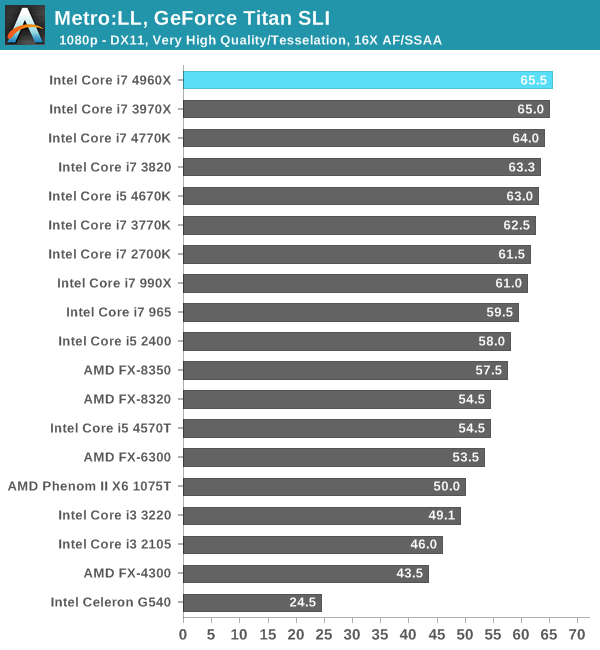 The tune shifts a bit with Metro: LL. Here the 4960X actually pulls ahead by a very small amount. In fact, both of the LGA-2011 6-core parts manage very small leads over Haswell here. The differences are small enough to basically be within the margin of error for this benchmark though.

A Square Enix game, Sleeping Dogs is one of the few open world games to be released with any kind of benchmark, giving us a unique opportunity to benchmark an open world game. Like most console ports, Sleeping Dogs’ base assets are not extremely demanding, but it makes up for it with its interesting anti-aliasing implementation, a mix of FXAA and SSAA that at its highest settings does an impeccable job of removing jaggies. However by effectively rendering the game world multiple times over, it can also require a very powerful video card to drive these high AA modes.

Our test here is run at the game's Extreme Quality defaults. 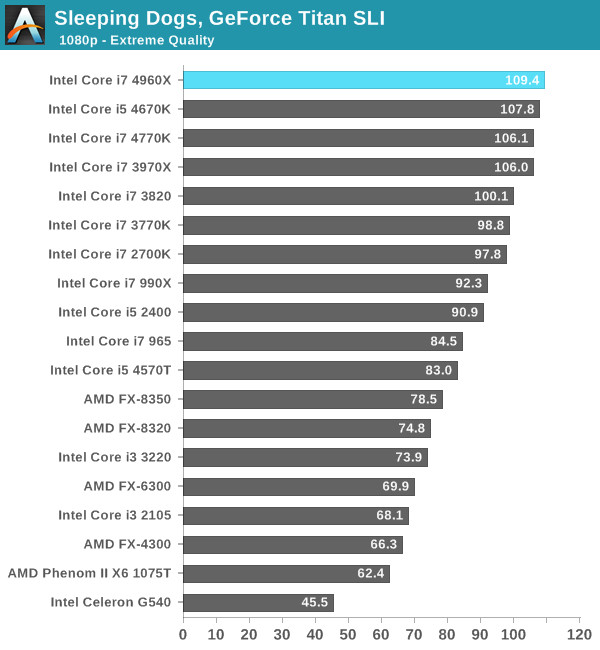 Sleeping Dogs shows similar behavior of the 4960X making its way to the very top, with Haswell hot on its heels.

The simply titled Tomb Raider is the latest entry in the Tomb Raider franchise, making a clean break from past titles in plot, gameplay, and technology. Tomb Raider games have traditionally been technical marvels and the 2013 iteration is no different. Like all of the other titles here, we ran Tomb Raider at its highest quality (Ultimate) settings. Motion Blur and Screen Effects options were both checked. 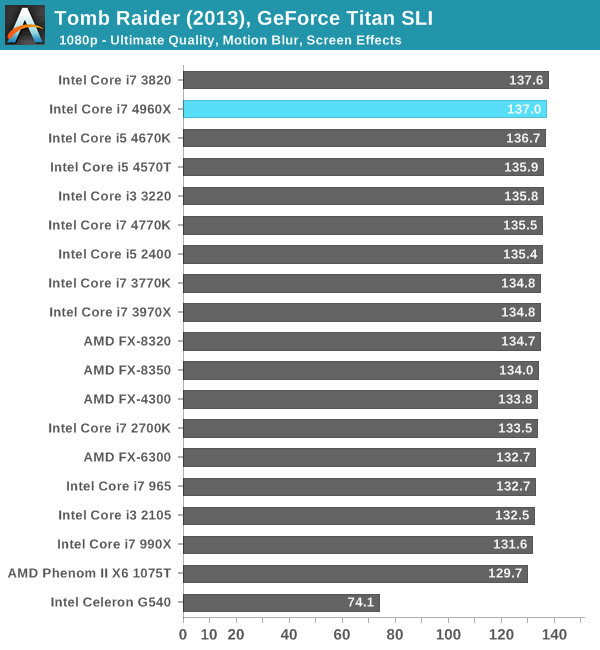 With the exception of the Celeron G540, nearly all of the parts here perform the same. The G540 doesn't do well in any of our tests, I confirmed SLI was operational in all cases but its performance was just abysmal regardless.

Our next benchmark is Shogun 2, which is a continuing favorite to our benchmark suite. Total War: Shogun 2 is the latest installment of the long-running Total War series of turn based strategy games, and alongside Civilization V is notable for just how many units it can put on a screen at once. Even 2 years after its release it’s still a very punishing game at its highest settings due to the amount of shading and memory those units require.

We ran Shogun 2 in its DX11 High Quality benchmark mode. 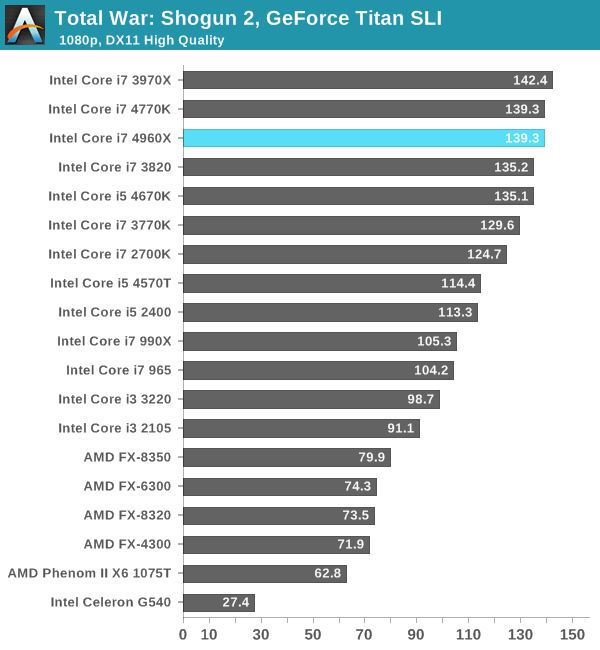 We see roughly equal performance between IVB-E and Haswell here.

GRID 2 is a new addition to our suite and our new racing game of choice, being the very latest racing game out of genre specialty developer Codemasters. Intel did a lot of publicized work with the developer on this title creating a high performance implementation of Order Independent Transparency for Haswell, so I expect it to be well optimized for Intel architectures. 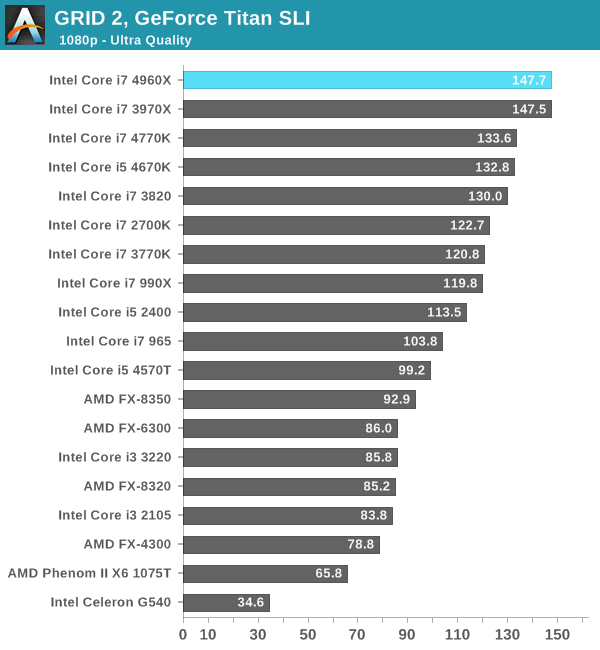 We started with a scenario where Haswell beat out IVB-E, and we're ending with the exact opposite. Here the 10% advantage is likely due to the much larger L3 cache present on both IVB-E and SNB-E. Overall you'll get great gaming performance out of the 4960X, but even with two Titans at its disposal you won't see substantially better frame rates than a 4770K in most cases.