Since the last time the iPad versus MacBook Air 11” comparison was brought up, both products have improved and evolved tremendously, the iPad more so than the Air. It’s easy to dismiss even making the connection (because who here actually cross-shops a high-end ARM tablet with a mid-range ultraportable, raise of hands please) but I think there are enough shared attributes to make a discussion worthwhile, especially considering the similarity in terms of form factor and now battery life. If I was looking for an extremely compact, thin, light, and long-lasting companion device to bring on a trip, they’re both completely valid answers. But which would I actually take? 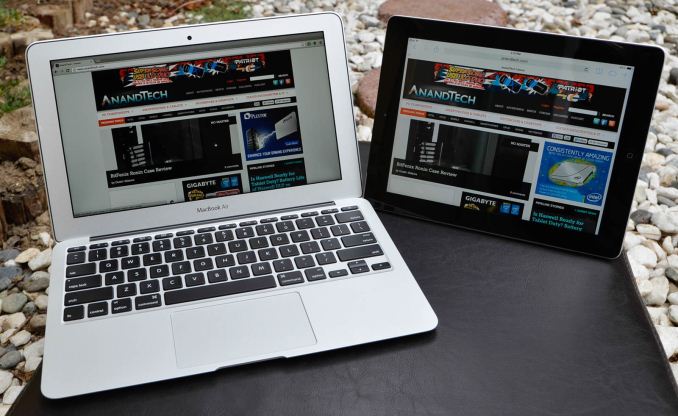 The short answer would almost always be the Air, for a variety of reasons, but I’ll get there. This basically goes back to the tablet versus notebook conversation for various usecases. The iPad is awesome as a travel device, as are most tablets in general, and you can see evidence of this in any airport terminal. Especially after the screen upgrade last year, the iPad is hands down one of the best content consumption devices on the market. It’s also my absolute favorite digital platform for reading. I’ll actually save lengthy articles, like some AnandTech reviews and other long-form content from other websites I enjoy, to read on my iPad. Between the sharpness of text on the Retina display and the physical closeness you have with the words, it’s about the closest you can get to a paper reading experience on an LCD. (This also holds true for any high-DPI tablet, including the Nexus 7.2, Nexus 10, Surface Pro, and others). Also, the ability to use a tablet with only one hand, not needing a platform of some kind, and general versatility of physical handling adds a convenience factor that’s hard to get from a notebook.

But when the tablet doesn’t have an inherent advantage in terms of size or battery life, it’s a lot harder to justify skipping the sheer versatility and power you get out of a real notebook computer, even a small one, for reasons that amount to the tablet being easier to use while standing up. The notebook is basically better at everything other than reading, and there’s far more computing horsepower at your disposal. You have far more control over everything that happens—media, browsing, documents, you name it. And there’s a real, physical keyboard, so in terms of productivity, there’s just not a conversation. To some degree, that’s always been something that held tablets back for me and I suspect the other editors on staff. Admittedly, our usecases typically involve a lot of writing and email, neither of which is easy at all without a hardware keyboard, so we’re probably not the right target demographic to judge tablets by. 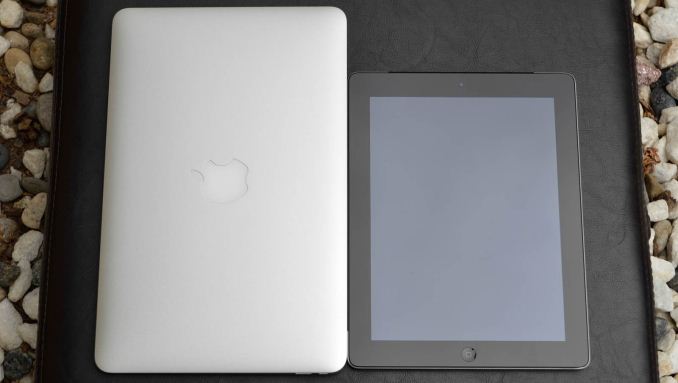 The capabilities of a Core i5-based ultraportable are so far beyond that of an iPad or Nexus 10 though, which is part of what makes this on the surface a somewhat odd comparison to be making. Obviously the tablets are cheaper, though it’s worth pointing out that a 128GB iPad (WiFi) is only $200 less than a 128GB Air 11”, and as noted earlier the iPad keyboards typically run $100. I don’t know why anyone would need that much storage on an iPad, maybe if you had a ton of 1080p video content that you really needed to carry with you everywhere. The 16 and 32GB iPads, at $499 and 599, are obviously far more accessible and probably more sensible investments.

I’m not trying to recommend that people buy the Air over the iPad, just that it’s possible to do so with very little compromise. It wasn’t really something you could do until now simply because of battery life, but with Haswell ULT boasting similar or better power efficiency than high-end ARM SoCs in light everyday CPU-driven workloads, it’s certainly something to think about. I think the best of both worlds situation is yet to come, possibly with something that looks like a thinner, Haswell-based Surface Pro with Windows 8.1 and significantly better battery life than we’ve seen out of Ivy Bridge tablets in the last year.