GTX 770 ends up being an interesting case study in all 3 factors due to the fact that NVIDIA is pushing the GK104 GPU so hard. Though the old version of GPU Boost muddles things some, there’s no denying that higher clockspeeds coupled with the higher voltages needed to reach those clockspeeds has a notable impact on power consumption. This makes it very hard for NVIDIA to stick to their efficiency curve, since adding voltages and clockspeeds offers diminishing returns for the increase in power consumption.

As we can see, NVIDIA has pushed up their voltage from 1.175v on GTX 680 to 1.2v on GTX 770. This buys them the increased clockspeeds they need, but it will drive up power consumption. At the same time GPU Boost 2.0 helps to counter this some, as it will keep leakage from being overwhelming by keeping GPU temperatures at or below 80C.

Speaking of clockspeeds, we also took the average clockspeeds for GTX 770 in our games. In short, GTX 770 is almost always at its maximum boost bin of 1136; the oversized Titan cooler keeps temperatures just below the thermal throttle, and there’s enough TDP headroom left that the card doesn’t need to pull back to avoid that. This is one of the reasons why GTX 770’s performance advantage over GTX 680 is greater than the clockspeed increases alone. 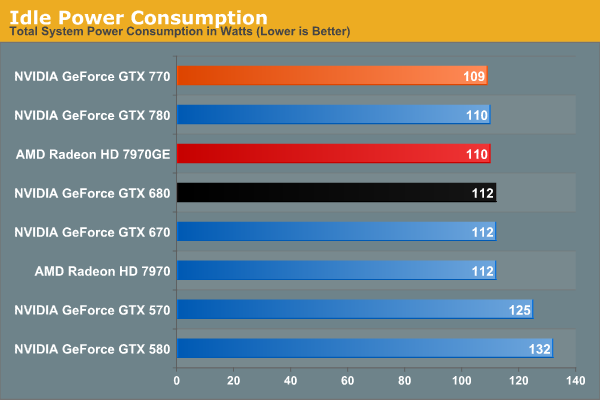 We don’t normally publish this data, but GTX 770 has an extra interesting attribute about it: its idle clockspeed is lower than other Kepler parts. GTX 680 and GTX 780 both idle at 324MHz, but GTX 770 idles at 135MHz. Even 324MHz has proven low enough to keep Kepler’s idle power in check in the past, so it’s not entirely clear just what NVIDIA is expecting here. We’re seeing 1W less at the wall, but by this point the rest of our testbed is drowning out the video card. 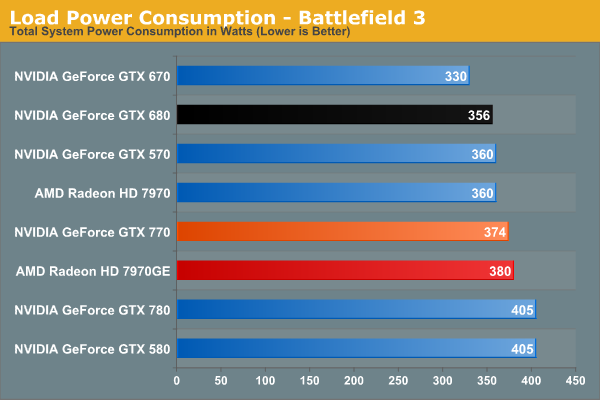 Despite this runup, GTX 770 still stays a hair under 7970GE, despite the slightly higher CPU power consumption from GTX 770’s higher performance in this benchmark. It’s only 6W at the wall, but it showcases that NVIDIA didn’t have to completely blow their efficiency curve to get a GK104 card back up to 7970GE performance levels. 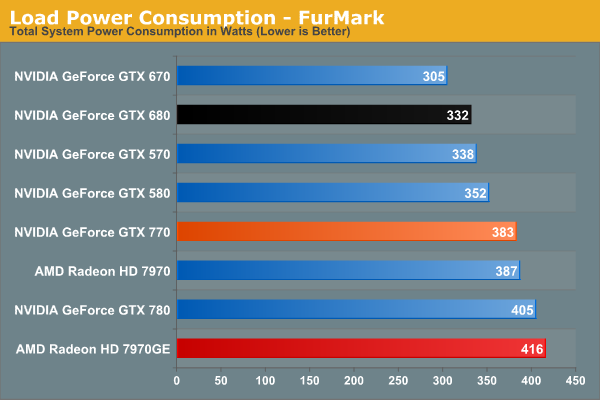 In our TDP constrained scenario we can see the gaps between our cards grow. 78W separates the GTX 770 from GTX 670, and even GTX 680 draws 41W less, almost exactly what we’d expect from their published TDPs. On the flip side of the coin 383W is still less than both 7970 cards, reflecting the fact that GTX 770 is geared for 230W while AMD’s best is geared for 250W.

This is also a reminder however that at a mid-generation product extra performance does not come for free. With the same process and the same architecture, performance increases require power increases. This won’t significantly change until we see 20nm cards next year. 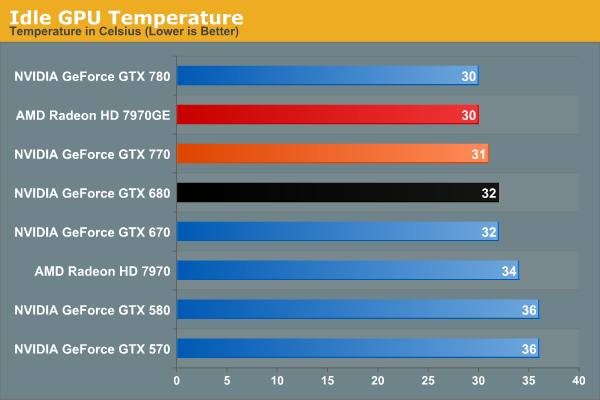 Moving on to temperatures, these are going to be a walk in the part for the reference GTX 770 due to the Titan cooler. At idle we see it hit 31C, which is actually 1C warmer than GTX 780, but this really just comes down to uncontrollable variations in our tests. 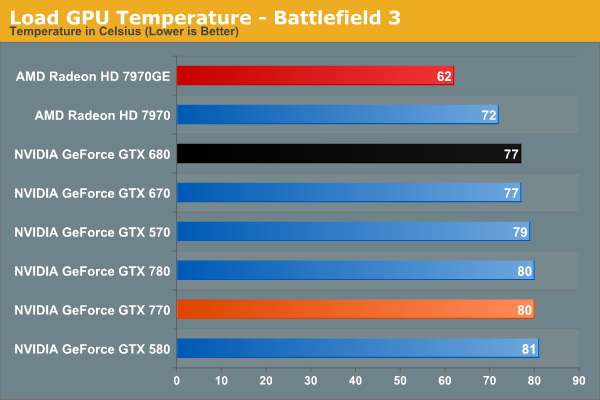 As a GPU Boost 2.0 card temperatures will top out at 80C in games, and that’s exactly what happens here. Interestingly, GTX 770 is just hitting 80C, as evidenced by our clockspeeds earlier. If it was running hotter, it would have needed to drop to lower clockspeeds.

Of course it doesn’t hold a candle here to 7970GE, but that’s the difference between a blower and an open air cooler in action. The blower based 7970 is much closer, as we’d expect. 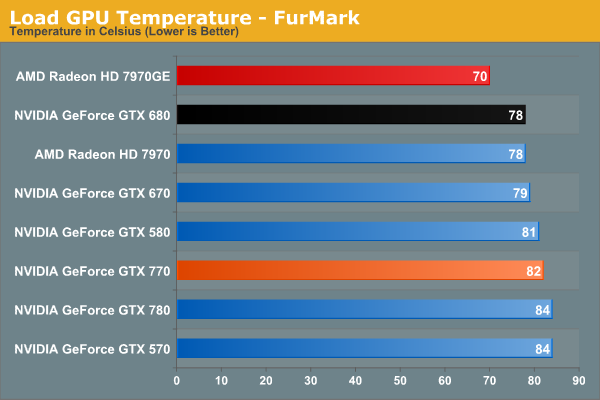 Under FurMark the temperature situation is largely the same. The GTX 770 comes up to 82C here (favoring TDP throttling over temperature throttling), but the relative rankings are consistent. 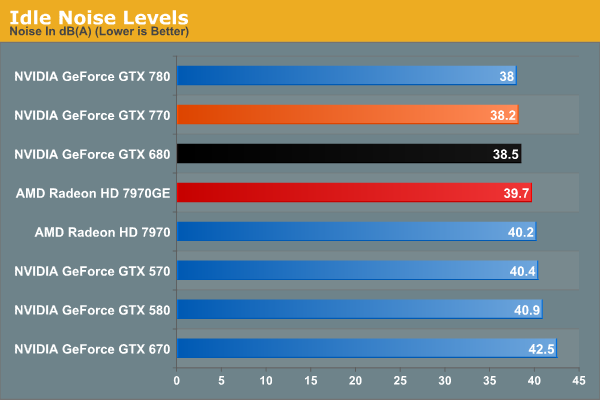 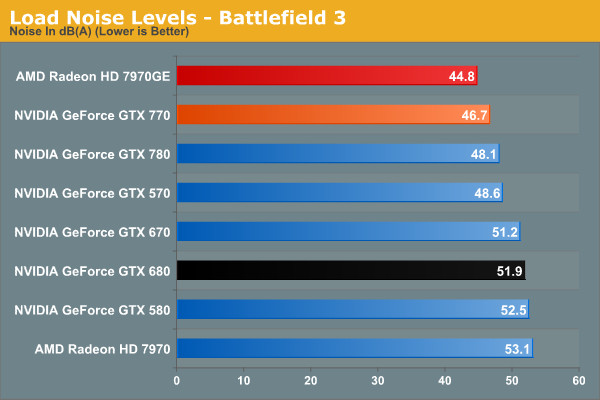 Our noise results under Battlefield 3 are a big part of the reason we’ve been calling the Titan cooler oversized for GTX 770. When is the last time we’ve seen a blower on a 230W card that only hit 46.7dB? The short answer is never. GTX 770’s fan simply doesn’t have to rev up very much to handle the lesser heat output. In fact it’s damn near competitive with the open air cooled 7970GE; there’s still a difference, but it’s under 2dB. More importantly however, despite being a more powerful and more power-hungry card than the GTX 680, the GTX 770 is over 5dB quieter, and this is despite the fact that the GTX 680 is already a solid card own its own. Titan’s cooler is certainly expensive, but it gets results.

Of course this is why it’s all the more a shame that none of NVIDIA’s partners are releasing retail cards with this cooler. There are some blowers in the pipeline, so it will be interesting to see if they can maintain Titan’s performance while giving up the metal. 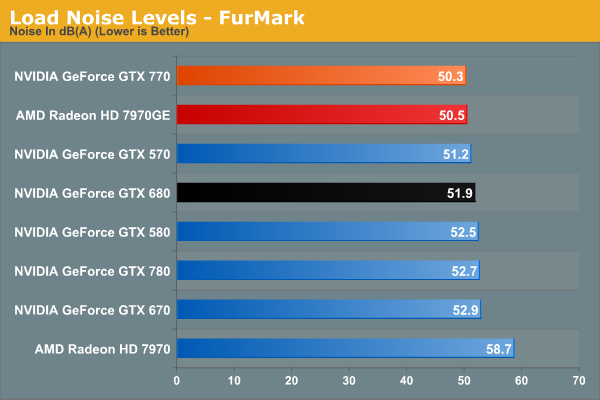 With FurMark pushing our GTX 770 at full TDP, our noise results are still good, but not as impassive as they were under BF3. 50.3dB is still over a dB quieter than GTX 680, though obviously much closer than before. On the other hand the GTX 770 ever so slightly edges out the 7970GE and its open air cooler. Part of this comes down to the TDP difference of course, but beating an open air cooler like that is still quite the feat.

Wrapping things up here, it will be interesting to see where NVIDIA’s partners go with their custom designs. GTX 770, despite being a higher TDP part than both GTX 670 and GTX 680, ends up looking very impressive when it comes to noise, and it would be great to see NVIDIA’s partners match that. At the same time the increased power consumption and heat generation relative to the GeForce 600 series is unfortunate, but not unexpected. But for buyers coming from the GeForce 400 and GeForce 500 series, GTX 770 is in-line with what those previous generation cards were already pulling.