Our multiplayer action game benchmark of choice is Battlefield 3, DICE’s 2011 multiplayer military shooter. Its ability to pose a significant challenge to GPUs has been dulled some by time and drivers at the high-end, but it’s still a challenge for more entry-level GPUs such as the iGPUs found on Intel and AMD's latest parts. Our goal here is to crack 60fps in our benchmark, as our rule of thumb based on experience is that multiplayer framerates in intense firefights will bottom out at roughly half our benchmark average, so hitting medium-high framerates here is not necessarily high enough. 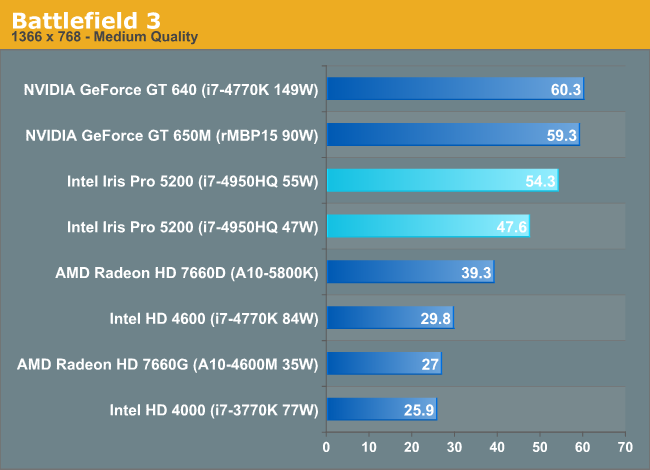 The move to 55W brings Iris Pro much closer to the GT 650M, with NVIDIA's advantage falling to less than 10%. At 47W, Iris Pro isn't able to remain at max turbo for as long. The soft configurable TDP is responsible for nearly a 15% increase in performance here.

Iris Pro continues to put all other integrated graphics solutions to shame. The 55W 5200 is over 2x the speed of the desktop HD 4000 and the same for the mobile Trinity. There's even a healthy gap between it and desktop Trinity/Haswell. 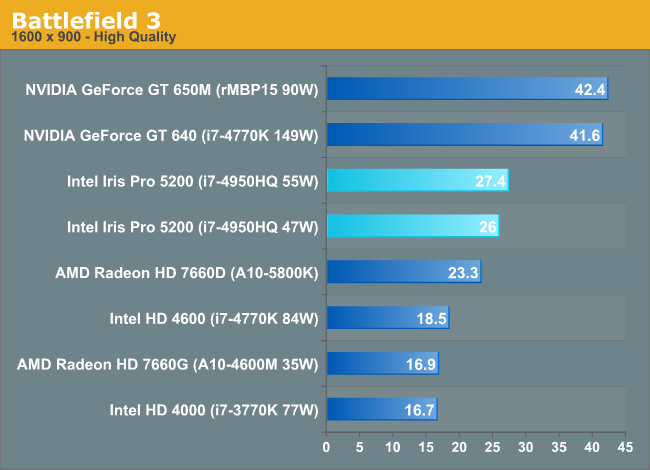 Ramp up resolution and quality settings and Iris Pro once again looks far less like a discrete GPU. NVIDIA holds over a 50% advantage here. Once again I don't believe this is memory bandwidth related, Crystalwell appears to be doing its job. Instead it looks like fundamental GPU architecture issue. 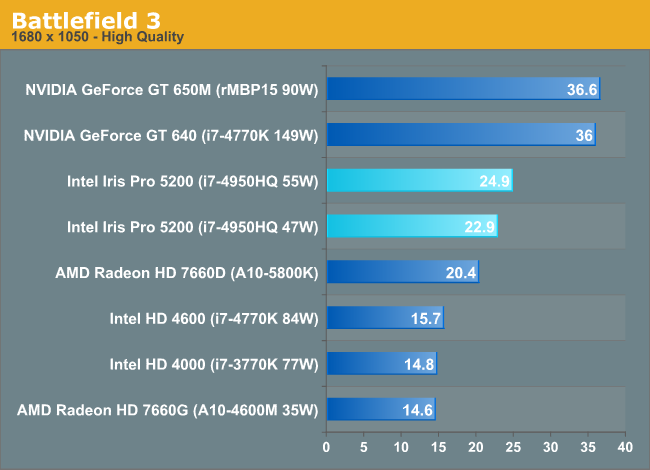 The gap narrows slightly with an increase in resolution, perhaps indicating that as the limits shift to memory bandwidth Crystalwell is able to win some ground. Overall, there's just an appreciable advantage to NVIDIA's architecture here.

The iGPU comparison continues to be an across the board win for Intel. It's amazing what can happen when you actually dedicate transistors to graphics.