The Start: The Rendering Pipeline In Detail

Before we can even discuss the concept of stuttering and other frame timing anomalies, we need to first take a look at a high-level overview of the Windows rendering pipeline. The pipeline isn’t particularly complex, but understanding where various stages of the process are in the hands of Windows, the CPU, the driver, and the video card is necessary to understand where bottlenecks and delays can occur.

At its most fundamental level, rendering a frame is a 3 part process. An application needs to pass data to Windows, Windows needs to manage the process and interface with the drivers, and finally once Windows and driver preparation is complete, a frame can be passed off to the GPU for final rendering and display. 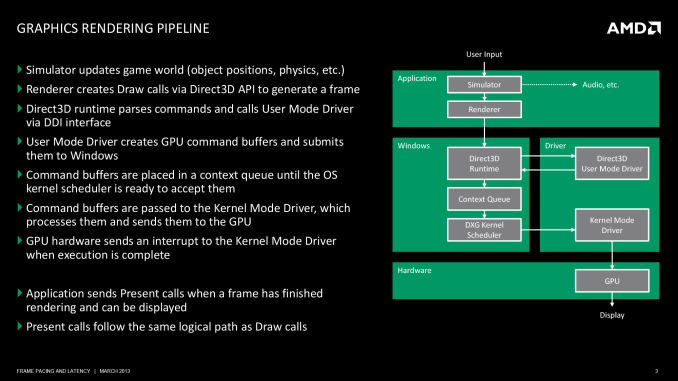 The reality of course is that this is harder than it sounds. It is not an insurmountable problem, but PCs are devices with a wide spectrum of performance and capabilities. A dual-core processor with an iGPU performs very different from a hex-core processor with a small army of GPUs, and an application needs to be able to accommodate this so that the simulation operates as evenly as possible in both CPU and GPU-bottlenecked scenarios.

Ultimately any timing model is going to be reactive, adjusting itself in response to prior events and how long previous frames took to render. Though another option is to shortcut this process entirely and operate at a fixed (or capped) simulation rate, either basing a game around 30Hz/60Hz operation, or decoupling rendering from the simulation entirely. Anyone who has uncapped id Software’s Rage for example will find that the game simply does not behave correctly without its 60Hz cap.

Static or dynamic, once a simulation has a suitable timing model in place we can then begin to look further down the chain, which is where we first encounter Direct3D, Windows’ primary 3D rendering API. Direct3D is nothing short of an enormous, complex structure of API calls and features. We tend to reduce it to version numbers and marque features for the sanity of ourselves and our readers – as we will here – but it goes without saying that Direct3D takes years to master; and for a GPU manufacturer it’s made all the more complex by the simultaneous existence of the modern iteration of Direct3D (DX10+), and the classic iteration that is DX9 and its predecessors.

For the purpose of the rendering pipeline Direct3D has a few different jobs. First and foremost, it is collecting draw calls from the application, combining them, and processing them for further work. Once a complete frame’s worth of draw calls has been collected, Direct3D passes its processed work over to the first component of the video card driver stack, the User Mode Driver (UMD).

It’s the UMD that is primarily responsible for taking the output of Direct3D and turning it into work batches the GPU can handle. These work batches, command buffers (aka Display Lists), are collections of instructions and data suitable for processing by the target GPU. Among other things, the UMD is responsible for shader compilation and assigning rendering elements to the correct (and best) surface formats for the GPU. 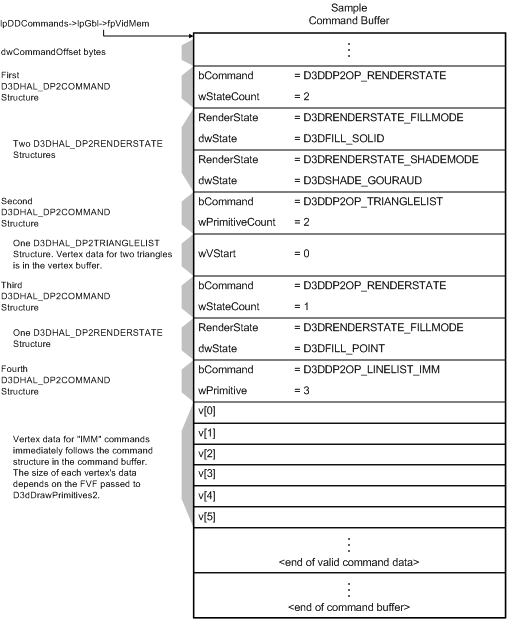 The context queue has also gone by other names over the years, such as the flip queue and the pre-rendered frames queue. This is the source of the 3 frame render-ahead limit in Windows that is sometimes exposed in games and drivers, as Windows will by default queue up to 3 frames in this manner. This can be controlled by application developers, but most will leave it at 3 so long as a game is smoothly moving along. 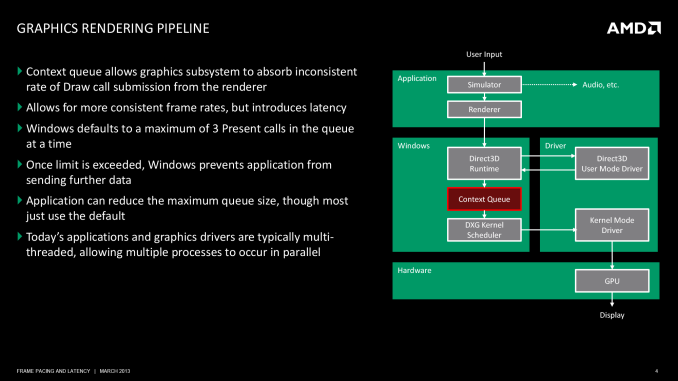 Beyond the context queue we have Windows’ GPU scheduler, which is what regulates the popping of command buffers off of the context queue to be fed to the kernel mode GPU driver (KMD). Beyond this point the rest of the pipeline is rather simple, with the KMD taking the command buffer and feeding it to the GPU, all the while the KMD and GPU work together to manage the operation of the GPU. When a frame is finally completed, the GPU generates an interrupt to inform the KMD and OS about the completion.

At the end of this process we have a rendered frame sitting in the GPU’s back-buffer, but the frame itself is not displayed automatically. At the end of a batch of command buffers – effectively making the beginning and ends of frames – is the Direct3D Present() call. Present is the command that is responsible for telling the GPU to flip the back buffer to the front and to present the rendered frame to the user. Only once the Present call executes does a frame get displayed. The Present call, though not a command buffer object, still follows the same rendering path as the command buffers, including queuing up in the Context Queue.