In and Around the Rosewill Armor EVO

Generally when I receive a review unit from a vendor that's in any state of disrepair, I'll contact them and request a replacement. Unfortunately with the Rosewill Armor EVO, the problem wasn't any specific physical damage, it was just poor build quality in the first place. I'll get there in a moment.

First, the aesthetic for the Armor EVO is for the most part pretty staid. "Gamer" enclosures have been getting progressively less ostentatious as of late (thankfully), and the Armor EVO is more of a stylized black box. It doesn't greatly stand out but doesn't need to, it merely needs to look decent and serve its purpose. The red LED fans behind the front grill add a nice bit of flair to the EVO, and the whole front being done as a mesh is an attractive, uniform design.

Move to the top of the case and you see the I/O panel and what is both the best and worst design decision in the EVO: the extruded fan grill. As a means of increasing interior space to allow headroom for a 240mm radiator, this is a great idea. I don't think it looks particularly bad either; mesh is a specific design motif for the EVO, so it makes sense that it would appear here as a functional accent. Where it goes horribly south are the rubber grommets used to hold the fans in place. Simply put, they barely work. Jostling in transit caused one of the fans to fall into the case. Reaffixing it revealed the same fundamental problem: with a bit of force, you can actually pull the grommets (and thus, the screws) through the grill and inside the case. So while there's space for a radiator, I wouldn't dare mount one as I don't believe the existing mounts can actually support the weight. This is a fatal flaw in the EVO's design.

The side panels are held in place with four thumbscrews (two each) and unfortunately, Rosewill employs a notched mounting mechanism instead of a hinge or any other design. Working with the Armor EVO, I'm actually starting to take this design as a personal affront; the steel notches on the panels themselves are easy enough to bend that if you try to jam the panel back onto the case without applying equal pressure to almost the entirety of the panel, you'll basically dig them into the side panel itself and have to bend them back out with a screwdriver. 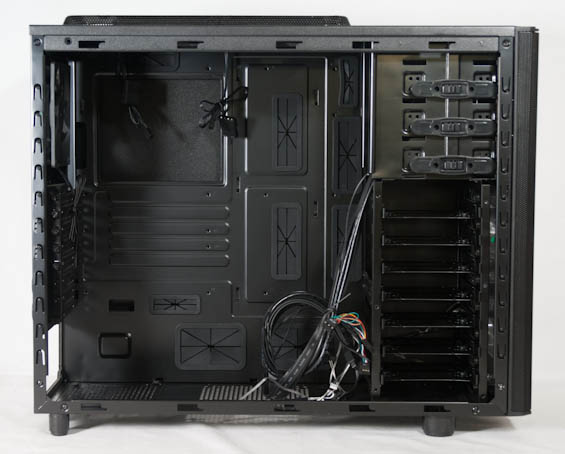 The EVO's interior is mostly smartly designed but still pretty bog standard for an ATX case. Rosewill includes seven laterally oriented drive sleds, and the drive sleds themselves are metal (NZXT, take note) and very sturdy. The toolless mounting mechanisms for the 5.25" bays are also nice and secure, and they're on both sides of the cage instead of just on the left. There are also the typical grommet-lined routing holes in the motherboard tray.

Honestly, it's difficult to press on with a review when you're dealing with such a glaring flaw as the mounting used for the top fans. I believe it's adequate to support the weight of the two included 120mm fans so long as they're not jostled, and if you opt to use screws with wider heads you can probably short circuit the problem. But the fact is, this seriously undermines the Armor EVO and needs to be fixed in short order.