Unfortunately, the Intel R2208GZ4GSSPP is a 2U server, which makes it hard to compare it with the 1U Opteron "Interlagos" and 1U "Westmere EP" servers we have tested in the past. We will be showing a few power consumption numbers, but since a direct comparison isn't possible, please take them with a grain of salt.

The Xeon E5 CPUs have four memory channels per CPU and support DDR3-1600, and thus our dual CPU configuration gets eight DIMMs for maximum bandwidth. The typical BIOS settings can be found below. 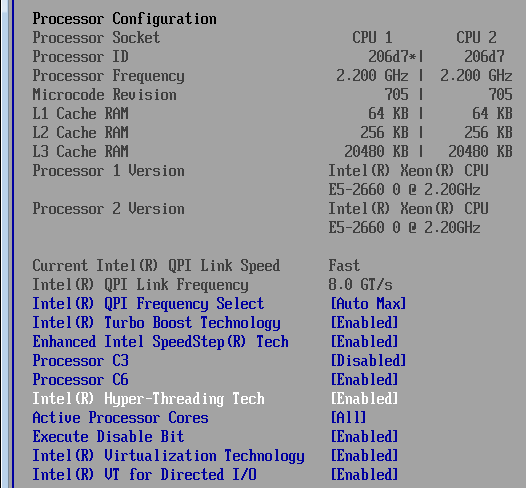 Not visible in the above image is that all prefetchers are enabled in all of the tests.

The same is true for the latest AMD Opterons: eight DDR3-1600 DIMMs for maximum bandwidth. You can check out the BIOS settings of our Opteron server below. 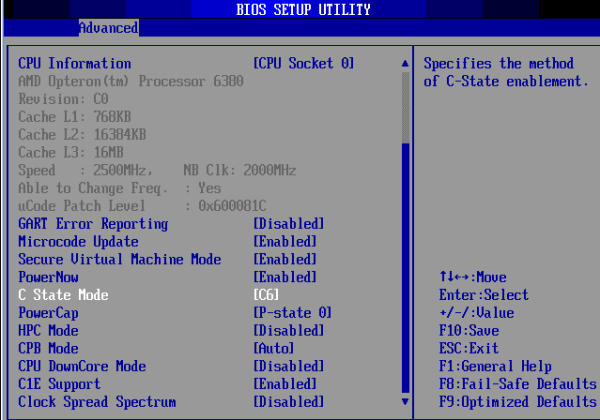 C6 is enabled, TurboCore (CPB mode) is on.

To speed up benchmarking, we tested the Intel Xeon and AMD Opteron system in parallel. As we didn't have more than eight 8GB DIMMs, we used our 4GB DDR3-1333 DIMMs. The Xeon system only gets 48GB, but this isn't a disadvantage as our highest memory footprint benchmark (vApus FOS, 5 tiles) uses no more than 40GB of RAM. There is no real alternative as our Xeon has three memory channels and cannot be outfitted with the same amount of RAM as our Opteron 6300 or Xeon E5 system (four channels).

Both servers are fed by a standard European 230V (16 Amps max.) powerline. The room temperature is monitored and kept at 23°C by our Airwell CRACs. We use the Racktivity ES1008 Energy Switch PDU to measure power consumption. Using a PDU for accurate power measurements might seem pretty insane, but this is not your average PDU. Measurement circuits of most PDUs assume that the incoming AC is a perfect sine wave, but it never is. However, the Rackitivity PDU measures true RMS current and voltage at a very high sample rate: up to 20,000 measurements per second for the complete PDU.