The industrial design of the UFO Power Center is definitely eye-catching, and may make for a good fit in some entertainment centers. Due to the non-standard design, it is sure to elicit polarizing opinions. Unfortunately, we are not great fans of the current size and shape of the unit. With a diameter of 12” and a height of 5”, it is too big to fit in most places where space is at a premium.

In addition, the clearance above and below the receptacles is not large enough for some ‘wall wart’ adapters, as shown in the photograph below (The adapter belongs to the Iomega EZ network attached hard disk). It is not possible to install the adapter with the output wire pointing downwards. Keeping the output wire pointed upwards (as shown below) makes it impossible to close the dome without dislodging the precariously positioned adapter from the receptacle. 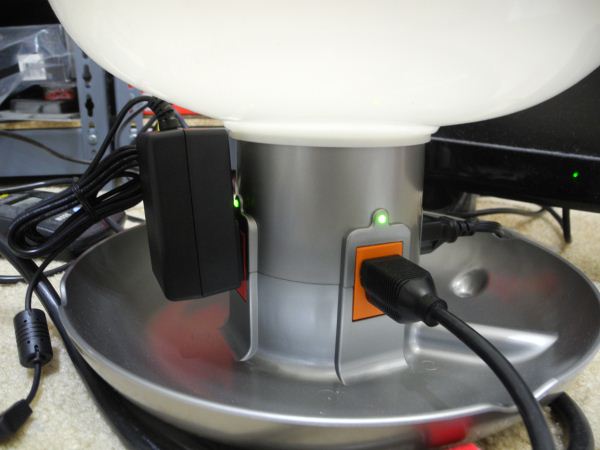 Visible Energy has a blog post explaining the reason behind the size of the unit, and we will leave it to the reader to be the final judge.

Most of us are interested in the internals of the unit. Disassembling the unit exposed the following main components: 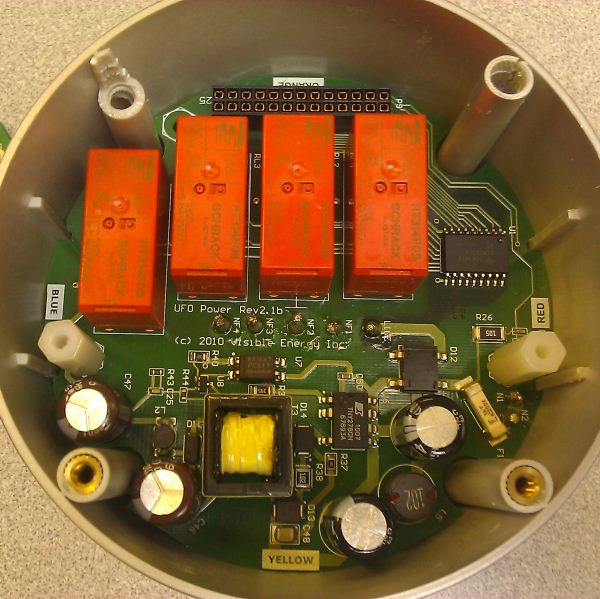 Despite being equipped with four relays capable of handling 16A each, Visible Energy has decided to play it safe by rating the whole unit for a maximum of 15A only.

A number of Wi-Fi companies (including TI, Qualcomm - Atheros and Marvell) have recently introduced a low cost system integrating the Wi-Fi radio and a MCU. Visible Energy currently uses two distinct chips for this, one from Atmel and the other from Realtek. The big vendors require complicated NDAs and large upfront payments. Given the projected low volume nature of the UFO Power Center (after all, it is Visible Energy’s first product) we actually need to applaud the company for choosing off-the-shelf components and making the entry price acceptable. 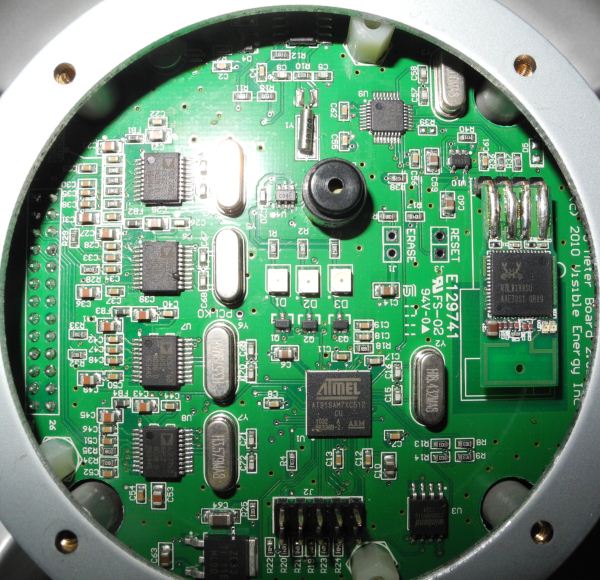 The Atmel microcontroller coordinates the operation of the unit as it sets up the ADE7763 chips for energy and power measurement. Power usage is computed and updated every second, while the energy usage is continuously monitored, but gets stored out once every five minutes. It also responds to the network requests from the Wi-Fi chip and sends back the requested data or modifies the relay status as applicable. The microcontroller also phones back home (to service.visiblenergy.com) with the energy / power data and socket status while also fetching any actions to be completed. These actions may have been set up by the user over the cloud interface. This pull mechanism enables control over the Internet without opening up any ports in the router for the unit. The downside is the fact that any change made to the socket status over the Internet could potentially take up to a minute to get reflected in the unit. Over the local network (for the iOS app / custom scripts using the open APIs), this is not a problem.

In addition, there are a number of other components such as a dedicated RTC (real time clock) and 1 MB of Flash memory for storage of energy history. This allows storage of the energy history of each socket for the previous 2 months at the minimum.

The LEDs and the Wi-Fi radio / miscellaneous board components contribute to a total power consumption of around 2.2 W even when nothing is connected to the sockets. By turning off the LEDs and the relays, it is possible to bring down the power to around 1.5 W.