These are going to be...big charts. For comparison's sake I'm including a basic table first that has the stats for the previous fans I tested along with the ten new fans I tested in this roundup. That should give you a pretty solid refresher. Note that the PWM fans will be tested at the Corsair H80's low, medium, and high fan settings while the standard 3-pin voltage-driven fans are stuck at their highest setting. The exception is the Antec TwoCool 120 which has a built in speed switch that toggles between low and high speeds.

As you can see, a lot of the vendors...like to flatter themselves. In fact, of the entire lineup only five are rated for noise above the noise floor of most commonly available consumer and even prosumer sound meters (that being 30dBA.) The best fan just from looking at the ratings would be the CoolerMaster SickleFlow 120 with its high static pressure, air flow, and low rated noise, but that fan turned out to be the worst fan in our last roundup by a long shot. Bottom line: don't believe everything you read on the packaging.

Ambient temperature during testing hovered between 23C and 25C. California has very strange weather. The margin for error on results is roughly 1C, and I'd strongly encourage you to mostly ignore the idle readings, which seem to show a little more variance and less reliability than the burned in load readings. I include them only for completeness' sake. 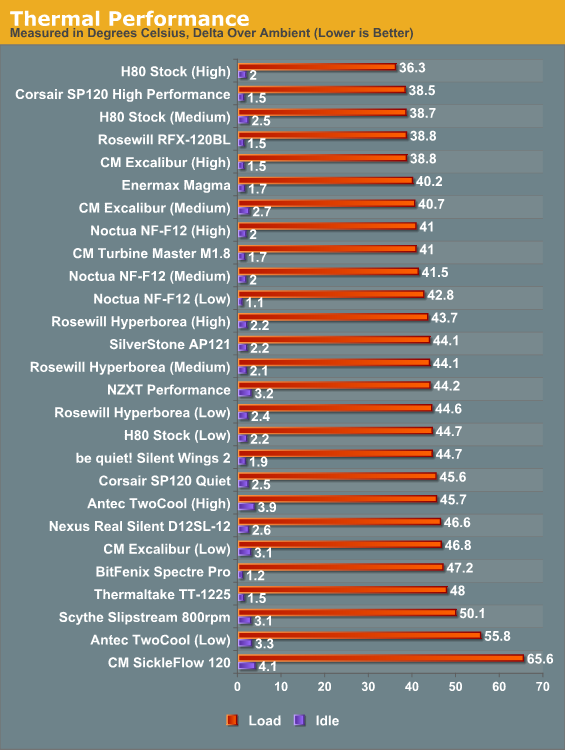 Corsair's solutions continue to be among the best performing if you're not at all concerned with noise. The H80's stock fan at its highest setting still remains essentially unstoppable and in fact offers excellent performance even at its medium setting. Interestingly, it turns out my wonderfully quiet Scythe Slipstream 800rpm fan barely moves any air; there are other fans that are nearly as quiet but produce substantially better thermal performance. Ultimately what we really need to beat is the H80 stock fan, though, and that seems to be easier said than done. Now let's see the noise levels under load. 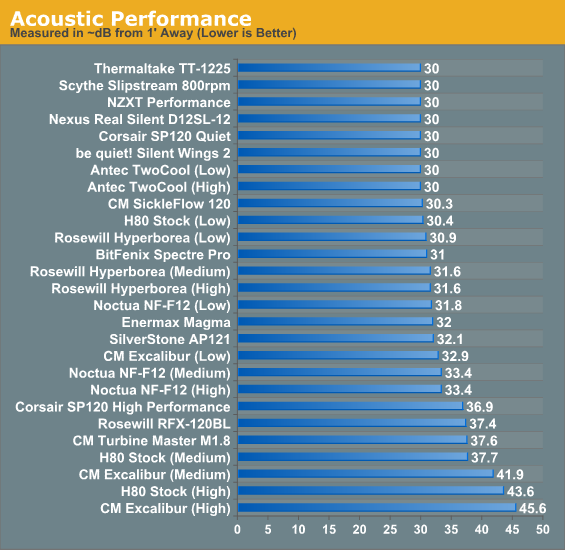 As much as I'd like to say there's a pretty clear relationship between noise and thermal performance, there are still nuances to tease out. The CoolerMaster fans, for example, perform louder than the H80 stock fan while being less efficient.

There are a couple of data points I do want to tease out. First, the Enermax Magma is for the most part readily available in retail, reasonably priced, and may actually be the best balanced fan in the roundup. It lacks PWM control, but it offers performance near the top of the performance chart at only 32dB; that's about 5dB lower than all of the other fans above it. The Magma is popular on forums and with these results in hand it's easy to see why.

Out of the sub-31dB club, though, there's a surprise victory: the Rosewill Hyperborea PWM fan. The Hyperborea isn't really capable of producing much better performance at higher speeds, making its PWM capability mostly for show, but if you're looking for an aftermarket fan it's basically competitive with both the stock H80 fan and the NZXT Performance fan.

And what about the much ballyhooed Noctua? As it turns out, if you run the NF-F12 at a low speed it's able to produce nearly competitive performance with Enermax's option. The draw here is that the NF-F12 is much easier to get to run quieter and the character of its noise is actually less intrusive than many of the other fans; it's a fancier fan with more control, but you do pay handsomely for the privilege of owning one.

Past these notables, everything kind of blurs together.