Intel came to a similar realization after the Pentium 4, which eventually resulted in its famous tick-tock cadence. Every year you get evolutionary improvements, either in power or performance (sometimes in both). Over the course of several years, especially if your competition isn't as aggressive, you end up with a series of products that look downright revolutionary.

Apple learned from the best and quickly adopted a similar approach after it released the iPhone in 2007. With the exception of last year's 4S launch, like clockwork, Apple brought out a new iPhone every year at around the same time. The summer launch cycle was pushed back to fall last year but, since then Apple continued its roughly 12 month cadence for the iPhone.

The smartphone SoC space is still operating on this hyper Moore's Law curve which allows for significant innovation on a yearly cadence rather than a big update every 18 - 24 months. Even Intel recognized this fact as it will shift Atom to a yearly update cadence starting towards the end of next year. 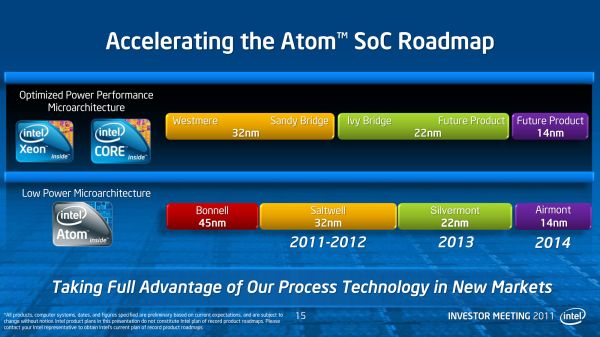 The fast pace of changes on the smartphone side combined with the similarly aggressive release schedules from its competitors explain the difference in Apple's approach to iPhone/iPad vs. new Mac releases. The former are launched with much more pomp and circumstance, and are on a 2-year chassis redesign cadence. There's also the fact that devices running iOS make up the largest portion of Apple's yearly revenue. At some point I would expect the innovation/release cadence to slow down, but definitely not for the next few years.

The first few iPhones largely leveraged Samsung designed and manufactured silicon. Back then I heard Samsung was paying close attention to Apple's requirements and fed that experience into its own SoC and smartphone design.

With a couple of successful iPhone generations under its belt, Apple set its sights much higher. Steve Jobs hired some of the brightest minds in CPU and GPU design and kept them close by. They would influence silicon supplier roadmaps as well as help ensure Apple was on the forefront of performance. Remember that CPU and GPU makers don't just set their own roadmaps, they ask their biggest customers and software vendors what they would like to see. As Apple grew in size, Apple's demands carried more weight.

Unlike the desktop/notebook CPU space, there was no truly aggressive SoC provider. The why is easy to understand. Mobile SoCs sell for $14 - $30, while the desktop and notebook CPUs that Intel invests so heavily in sell for around 10x that, despite being 1 - 4x the physical die size of their cheaper mobile counterparts. In short, most SoC providers felt that no one would be willing to pay for a big, high performance chip, so no one made them. Ultimately this led to a lot of embarassment, with companies like NVIDIA being known for their graphics prowess losing when it came to SoC GPU performance.

Realizing the lack of an Intel-like player in the mobile SoC space, Apple took it upon itself to build the silicon it needed to power the iPhone and iPad. By controlling its own SoC destiny it could achieve a level of vertical integration that no OEM has enjoyed in recent history. Apple would be able to define the experience it wanted, then work with the device, OS, application and SoC teams to deliver that experience. It's a very tempting thing to strive for, the risks are plentiful but the upside is tremendous.

The A4 SoC was Apple's first branded solution, although internally it still leveraged licensed IP blocks from ARM (Cortex A8) and Imagination Technologies (PowerVR SGX 535). Its replacement, the A5, moved to a dual-core Cortex A9 setup with a much beefier GPU from Imagination (PowerVR SGX 543MP2). For the 3rd generation iPad, Apple doubled up GPU core count and built the largest ARM based mobile SoC we've seen deployed.

When I first looked at the A4, I wrote the following:

Apple is not a microprocessor company, nor does Apple want to toss its hat in with the likes of Intel, NVIDIA, Qualcomm and TI as an SoC maker. History has shown us that the only way to be a successful microprocessor company is to be able to subsidize the high cost of designing a powerful architecture over an extremely large install base. That's why x86 survived, and it's why the ARM business model works.

Designing high performance SoCs just for use in the iPad and iPhone just doesn't make sense. In the short term, perhaps, but in the long run it would mean that Apple would have to grow the microprocessor side of its business considerably. That means tons of engineers, more resources that aren't product focused, and honestly re-inventing the wheel a lot.

The fact that the A4 appears to be little more than a 45nm, 1GHz Cortex A8 paired with a PowerVR SGX GPU tells me that Apple isn't off its rocker. I don't exactly know what Apple is doing with all of these CPU and GPU engineers in house, but licensing tech from the companies who have experience in building the architectures is still on the menu.

While I still believe that, long term, Apple will either have to commit to being a full blown chip company or buy processors from whoever ends up dominating the mobile SoC industry it's clear that for the foreseeable future Apple will be a device company that also makes mobile SoCs. Given the state of the mobile SoC space at this point, I can't blame Apple for wanting to build its own chips.

Apple's A6 is the next step in the company's evolution. Although it continues to license graphics IP from Imagination Technologies (PowerVR SGX 543MP3) and it licenses the ARMv7 instruction set from ARM, it is the first SoC to feature Apple designed CPU cores. The A6 is also the second Apple SoC to be built using Samsung's 32nm LP High-K + Metal Gate transistors. Thanks to UBM Tech Insights and Chipworks we have some great die shots of A6 as well as an accurate die size.

I've updated our die size comparison to put the A6 in perspective: 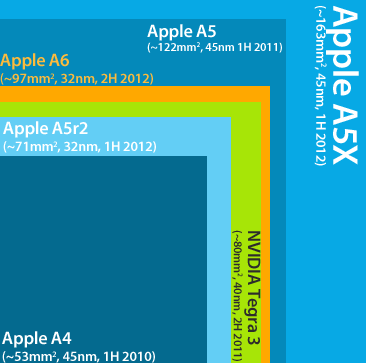 The new SoC is smaller than the A5 used in the iPhone 4S, but it's built on a newer process which will have some added costs associated with it (at least initially). Over time I would expect A6 pricing to drop below that of the A5, although initially there may not be much (if any at all) cost savings. Note that Apple's 32nm A5r2 is very close in size to the A6, which made it a great test part for Samsung's 32nm process. Apple likely caught the bulk of its process issues on A5r2, making an aggressive ramp for A6 on 32nm much easier than it would have been previously. It's clear that the Apple SoC team benefitted from the practical experience of its members.

Putting the A6 in perspective, we have the usual table we throw in our CPU reviews:

Although the A6 is significantly smaller than the mammoth A5X, it's still quite large by mobile SoC standards. At 97mm2 Apple's A6 is slightly larger than a dual-core Ivy Bridge with GT1 graphics. Granted that's not a very impressive part, but it's still a modern chip that Intel sells for over $100. I'm still not sure what the die size sweet spot is for a smartphone/tablet SoC, perhaps something around 120mm2? I just can't see the 200mm2 chips we love on the desktop being the right fit for ultra mobile. 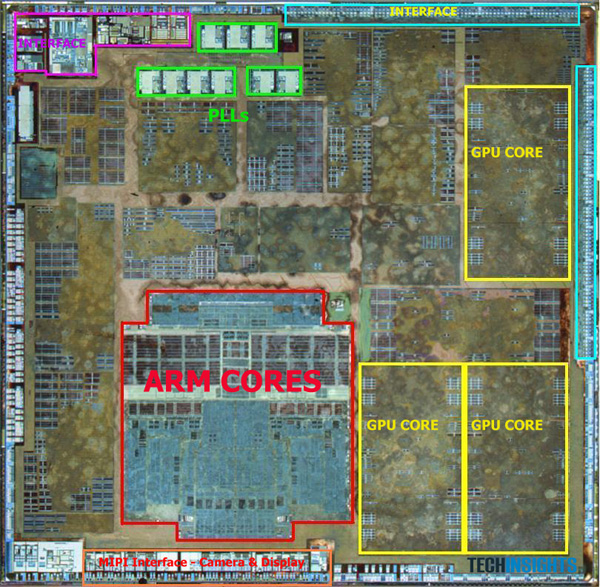 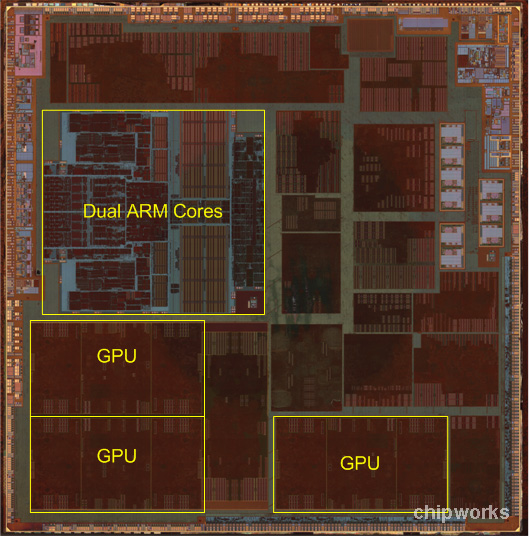 Chipworks was first to point out that Apple's custom CPU cores appeared to be largely laid out by hand vs. using automated tools. Not using automated layout for all parts of a CPU isn't unusual (Intel does it all the time), but it is unusual to see in an ARM based mobile SoC. Shortly after the iPhone 5's launch we confirmed that the A6 SoC featured Apple's first internally designed ARM CPU cores. As a recap there are two types of ARM licensees: architecture and processor. A processor license gives you the right to take an ARM designed CPU core and integrate it into your SoC. Apple licensed ARM's Cortex A9 design in the A5/A5X SoCs for example. An architecture license gives you the right to design your own core that implements an ARM instruction set. Marvell and Qualcomm are both examples of ARM architecture licensees.

For years it's been rumored that Apple has held an ARM architecture license. With the A6 we now have conclusive proof. The question is, what does Apple's first custom ARM CPU core look like? Based on Apple's performance claims we know it's more than a Cortex A9. But to find out what the architecture looks like at a high level we had to do a lot of digging.