Understanding the A6's GPU architecture is a walk in the park compared to what we had to do to get a high level understanding of Swift. The die photos give us a clear indication of the number of GPU cores and the width of the memory interface, while the performance and timing of release fill in the rest of the blanks. Apple has not abandoned driving GPU performance on its smartphones and increased the GPU compute horsepower by 2x. Rather than double up GPU core count, Apple adds a third PowerVR SGX 543 core and runs the three at a higher frequency than in the A5. The result is roughly the same graphics horsepower as the four-core PowerVR SGX 543MP4 in Apple's A5X, but with a smaller die footprint.

As a recap, Imagination Technologies' PowerVR SGX543 GPU core features four USSE2 pipes. Each pipe has a 4-way vector ALU that can crank out 4 multiply-adds per clock, which works out to be 16 MADs per clock or 32 FLOPS. Imagination lets the customer stick multiple 543 cores together, which scales compute performance linearly.

SoC die size however dictates memory interface width, and it's clear that the A6 is significantly smaller in that department than the A5X, which is where we see the only tradeoff in GPU performance: the A6 maintains a 64-bit LPDDR2 interface compared to the 128-bit LPDDR2 interface in the A5X. The tradeoff makes sense given that the A5X has to drive 4.3x the number of pixels that the A6 has to drive in the iPhone 5. At high resolutions, GPU performance quickly becomes memory bandwidth bound. Fortunately for iPhone 5 users, the A6's 64-bit LPDDR2 interface is a good match for the comparatively low 1136 x 640 display resolution. The end result is 3D performance that looks a lot like the new iPad, but in a phone:

We ran through the full GLBenchmark 2.5 suite to get a good idea of GPU performance. The results below are largely unchanged from our iPhone 5 Performance Preview, with the addition of the Motorola RAZR i and RAZR M. I also re-ran the iPad results on iOS 6, although I didn't see major changes there. 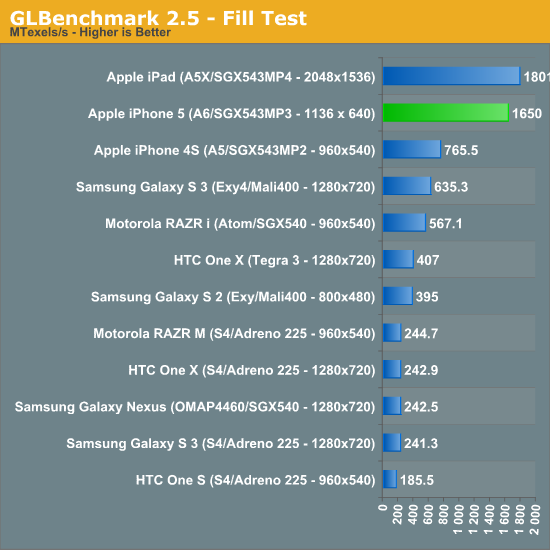 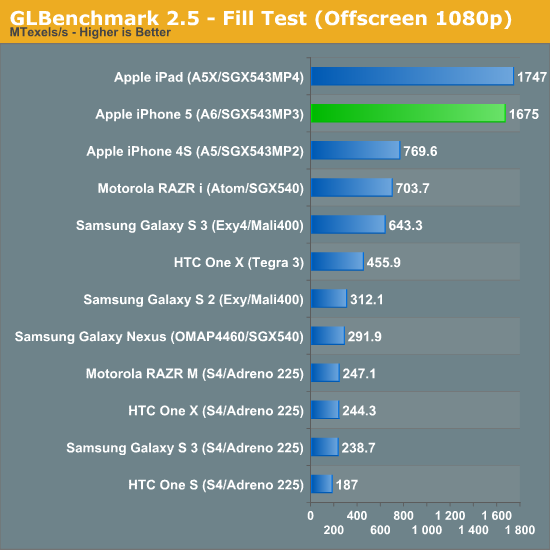 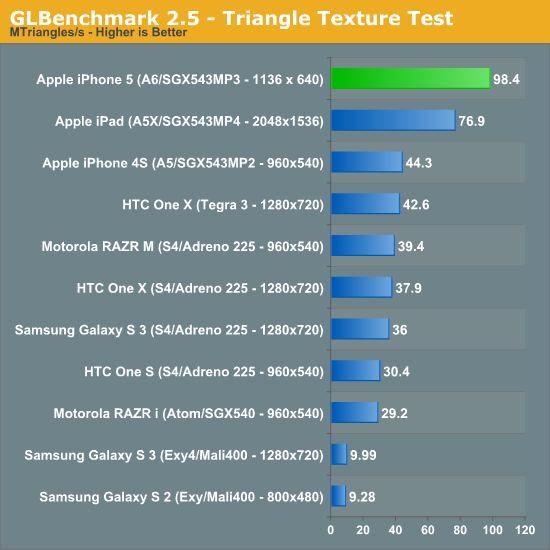 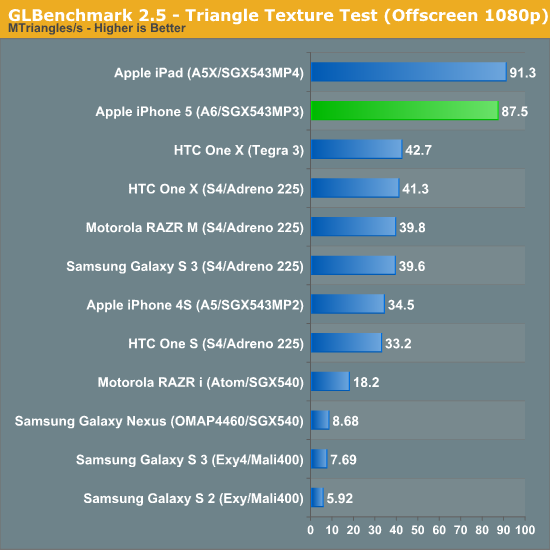 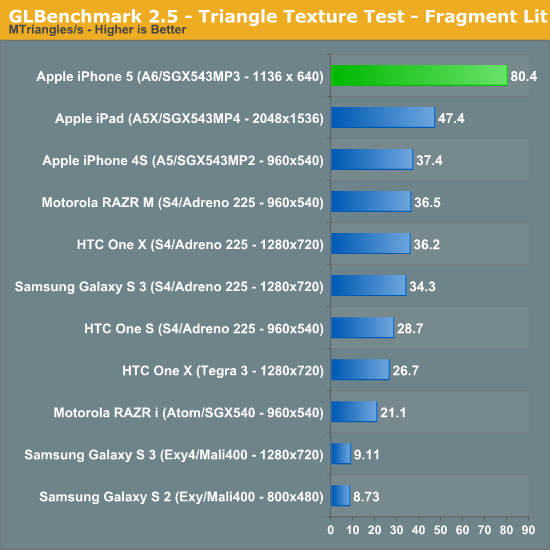 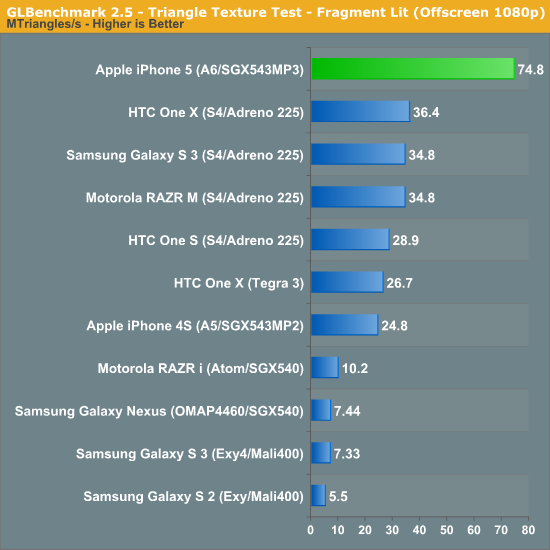 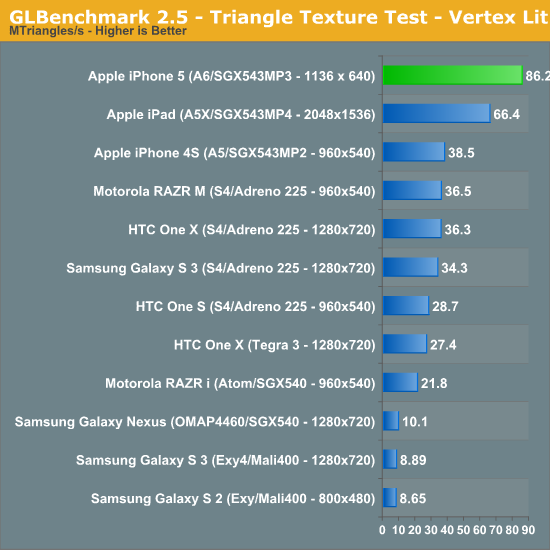 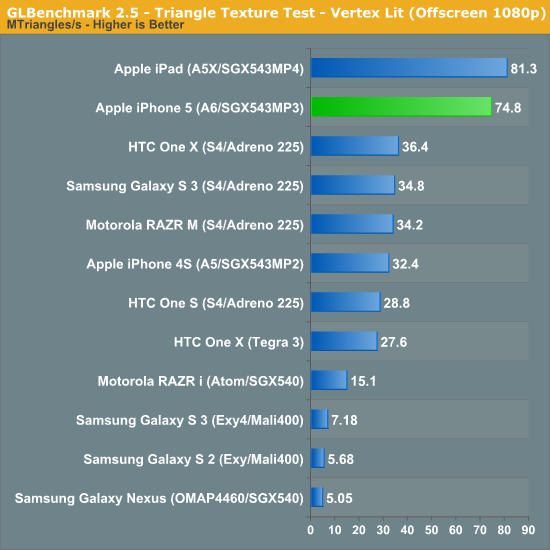 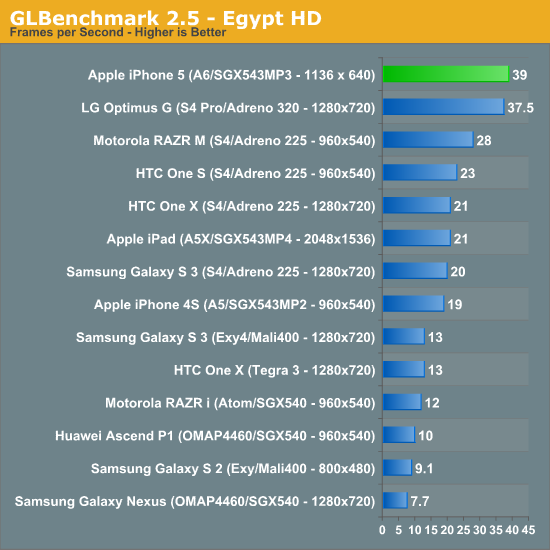 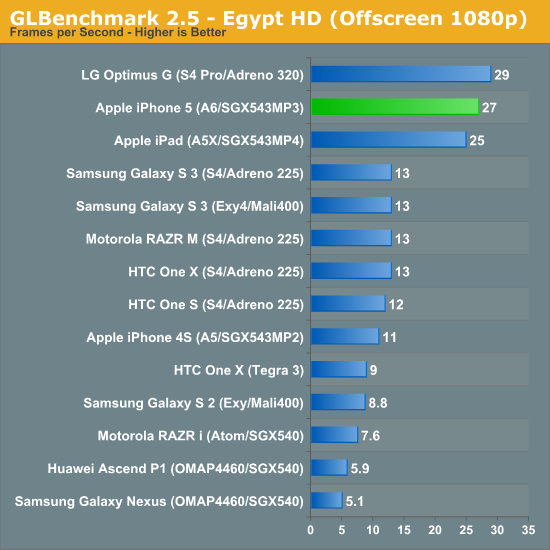 When we run everything at 1080p the iPhone 5 looks a lot like the new iPad, and is about 2x the performance of the Galaxy S 3. Here, LG's Optimus G actually outperforms the iPhone 5! It looks like Qualcomm's Adreno 320 is quite competent in a phone. Note just how bad Intel's Atom Z2460 is, the PowerVR SGX 540 is simply unacceptable for a modern high-end SoC. I hope Intel's slow warming up to integrating fast GPUs on die doesn't plague its mobile SoC lineup for much longer. 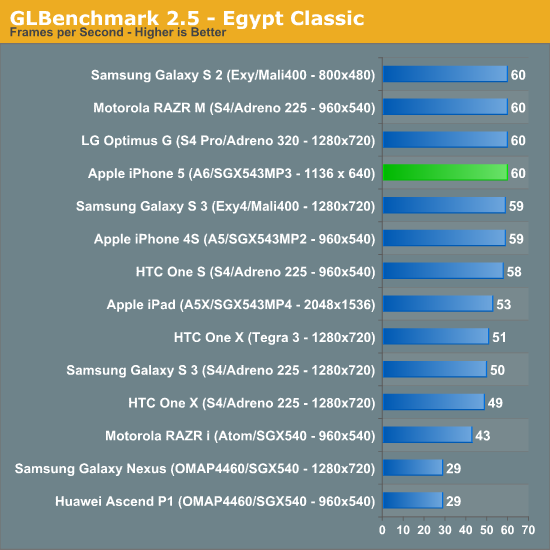 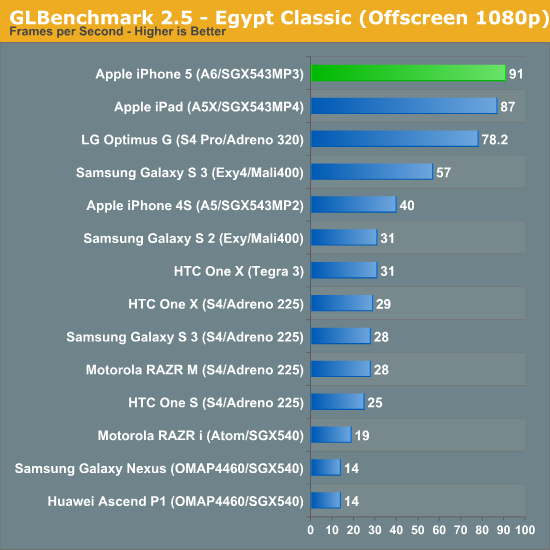 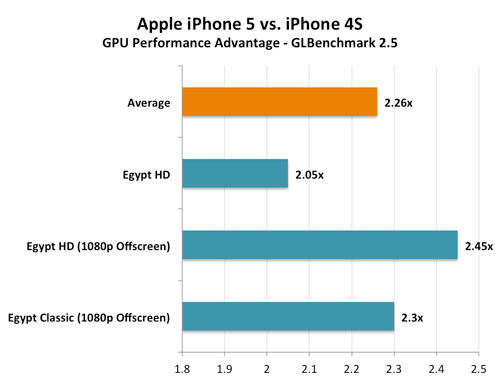