The Optimus 4X represents a thorough overhaul in LG’s design language. Gone are the melted-by-microwave contours, replaced by a sparse, geometric design focused on flat surfaces and radiused chrome edges. The overall effect is actually very reminiscent of the international and AT&T versions of the much-loved Galaxy S II because of the chrome ring around the bezel as well as the general flatness of the design. It’s different, with tighter radiuses making the rectangularity of the device that much more apparent, as well as an interesting brushed pattern to the plastic battery cover, but similar enough to make the comparison. As a huge fan of the Galaxy S II I-9100, I find it to be a very pleasing design. It doesn’t feel as ultramodern as the SGS3 and the One X, maybe a little bit last generation even, but there are some benefits to that. 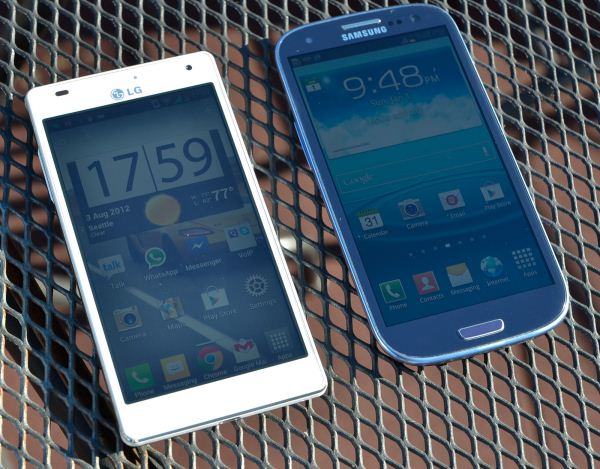 The rectangular shape helps give the O4X very compact dimensions, with minimal overhang from the 4.7” display. As display sizes grow, the amount of wasted space around the display becomes a much larger concern to maintain pocketability and in-hand usability. While HTC and Samsung went with contoured design languages to combat this issue, LG stuck to basic geometric shapes and was very fastidious about keeping the footprint as small as possible. And for the most part, they’ve succeeded.  It’s smaller than both the One X and SGS3, and comes very close to matching the Galaxy Nexus (4.65” display). 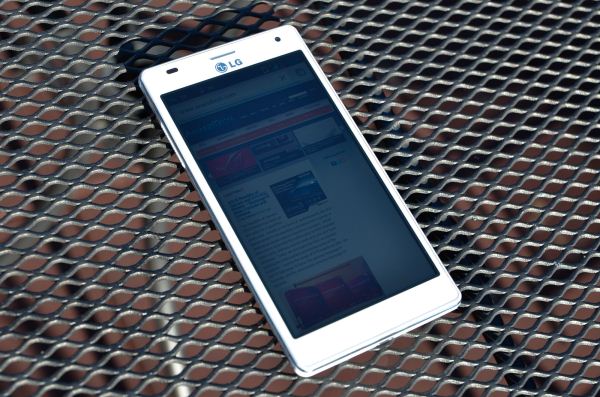 The styling is very, very clean, with minimal extraneous details. The front is entirely clean, other than the chrome LG logo, front facing camera, earpiece, and proximity sensor. There are three capacitive touch buttons (back, home, menu) that light up when touched but otherwise disappear to make it look like an unblemished piece of plastic. Having buttons appear only after they’re touched sounds counterintuitive, but you learn quickly to just stab in the general area of the button you’re going for. If you’ve ever used an Android device before, it comes pretty naturally. I do take issue with LG’s inclusion of a menu button instead of a task switcher, as I do with Samsung and the Galaxy S III. I much prefer the button layout of the GNex and HTC’s One series, with a dedicated task switching key in place of the menu button. My other problem with the O4X button layout is that the buttons are all placed very close to the screen, so it’s easy to accidentally press one of them while typing. A common one for me is hitting the space bar and the home key at the same time, which can get annoying pretty quickly. Ideally, LG would have included an extra millimeter or so, in order to give a bit more buffer room between the screen and the capacitive buttons.

The sides of the O4X HD are basically made up of two chrome rings separated by a contoured plastic center. The volume toggle protrudes from the plastic on the left side and is very easy to find by touch. The hardware button layout is dead set perfect; the power button and headphone jack are at the top and the micro-USB port is centered at the bottom, just as God intended them. I’ve gotten used to Samsung and Nokia’s fascination with putting power buttons on the right side, but it’s always a relief to get my hands on a device with everything in the right place. 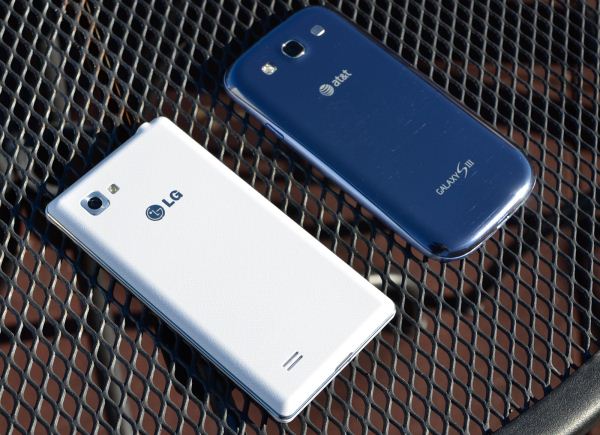 The battery cover is white plastic, but not nearly as cheap feeling as the plastic used in the Galaxy S2’s battery door. It has beveled edges all the way around, giving it a bit of visual interest as well as making it easier to hold. The brushed texture also gives it an interesting feel, but contrasts weirdly with the triangular texture used on the sides and volume buttons. Removing the battery cover doesn’t really inspire much confidence in its construction, but it is at least better than what Samsung usually does, and I’ve dealt with enough of LG and Samsung devices to know that even if they don’t feel particularly solid, it’ll take more than standard operation to break the plastic. It’s reassuring to see removable batteries in the SGS3 and the O4X HD, with so many manufacturers switching to sealed batteries and unopenable devices in recent times. The Apple effect is catching on, but apparently the Koreans haven't gotten the memo, thankfully.