Our first graphics test is Crysis: Warhead, which in spite of its relatively high system requirements is the oldest game in our test suite. Crysis was the first game to really make use of DX10, and set a very high bar for modern games that still hasn't been completely cleared. And while its age means it's not heavily played these days, it's a great reference for how far GPU performance has come since 2008 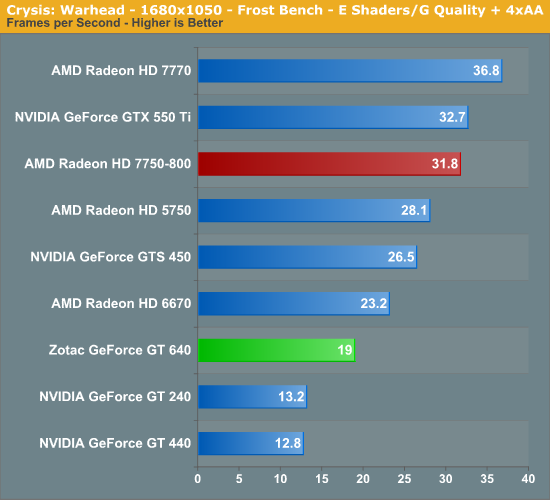 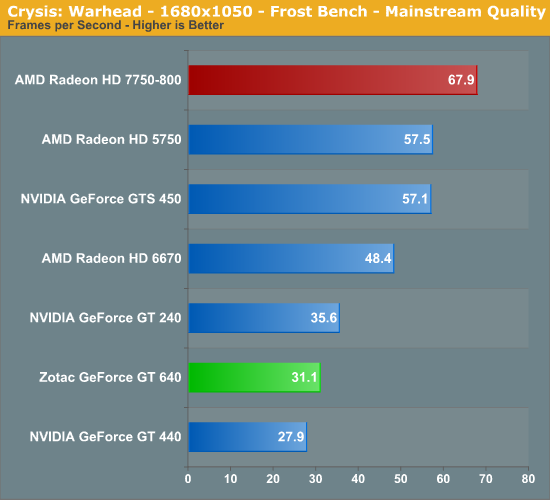 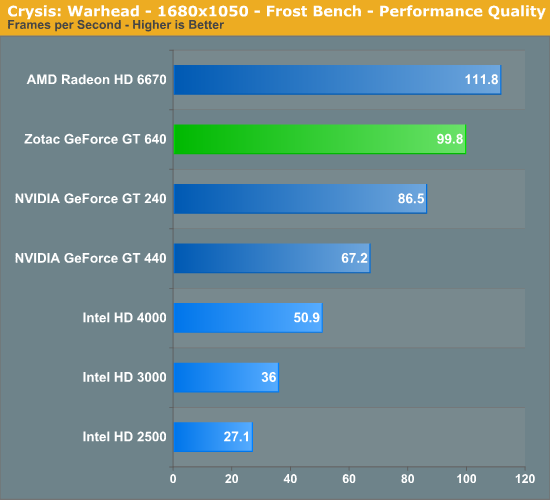 NVIDIA’s internal guidance on GT 640 DDR3 performance is that it should beat the Radeon HD 6670 by around 20%, however Kepler’s poor performance under Crysis means that isn’t going to happen here. At 31fps at 1680 with Mainstream quality the GT 640 is just barely playable here, with the Radeon HD 7750-800 (a similar sub-75W card) more than doubling its performance. Worse, the GT 640 actually loses to the GT 240 here, with NVIDIA’s two-generation old card beating it by 14%. To NVIDIA’s credit this happened to be the only test where that occurs, but this does a great job driving home the point that the GT 640 is heavily handicapped with DDR3.

On that note, given what we’ve seen with Kepler so far with GK104 cards and now with the GK107 GT 640, this further reinforces the idea that Crysis above all else a memory bandwidth hungry test. GTX 680 failed to greatly improve upon the GTX 580 when the two had similar amounts of memory bandwidth, and while the GT 640 does improve upon the GT 440 by quite a bit at times the fact that it loses to the GDDR5 GT 240 lends further proof to our theories. It will be interesting to see what happens here once we do see a GDDR5 card.

Finally, while we’ve focused thus far on the GT 640’s poor performance relative to its current competition, it’s not all bad news for NVIDIA. With Performance and Gamer quality in particular the GT 640 improves upon the GT 440 by a rather impressive 48% despite the fact that the two cards have similar memory bandwidth, reflecting just how much of an impact doubling the shader performance and quadrupling the ROPs can have.

On that note, as this happened to be one of only a couple of games where our test settings overlapped our iGPU test settings, we’ve also thrown in our Intel HD graphics numbers. The CPUs aren’t identical (all of our dGPU testing is on SNB-E), but we’re GPU limited to such a large degree that it doesn’t make a practical difference. NVIDIA wants to sell the GT 640 as an upgrade to i3/i5 systems with Intel’s HD graphics, and while its performance may be lacking compared to its competition, at the very least GT 640 handily surpasses any iGPU. Intel’s decision to ship most desktop IVB CPUs with HD 2500 means that GT 640 can nearly quadruple the IVB GPU’s performance under Crysis. 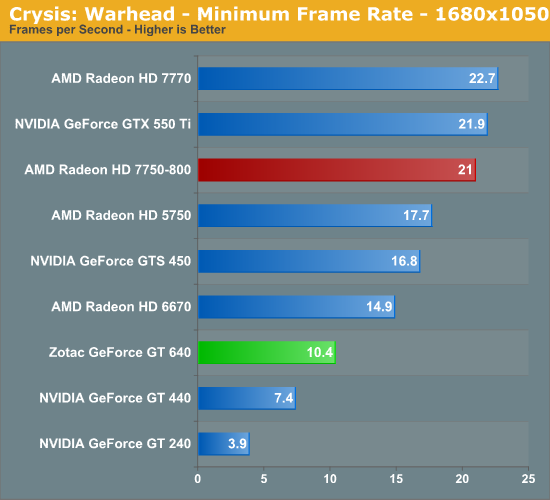 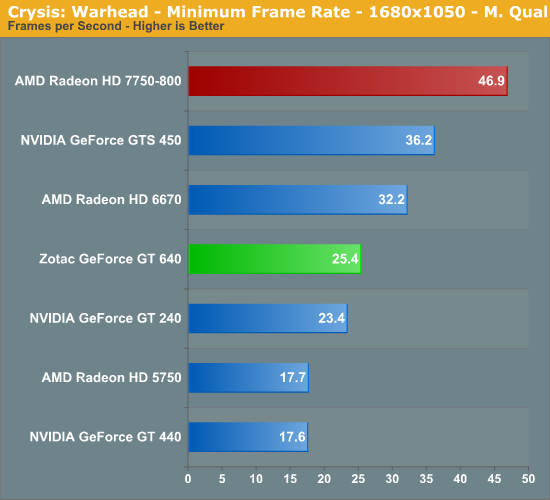 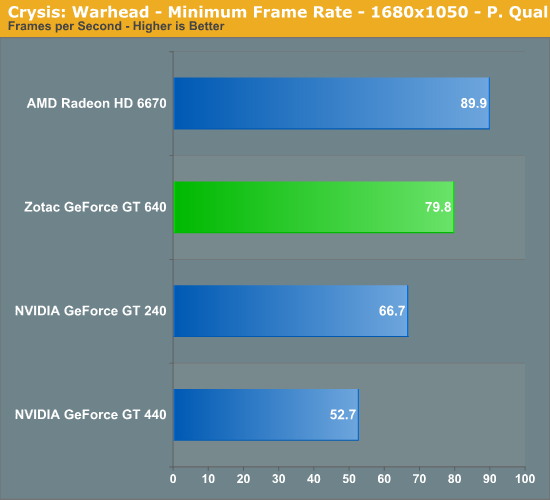 Looking at the minimum framerates the story is much the same. The GT 640 is well behind the 7750 and similar cards. At best it manages to beat the GT 240, most likely due to the former’s lack of total VRAM (it only has 512MB). 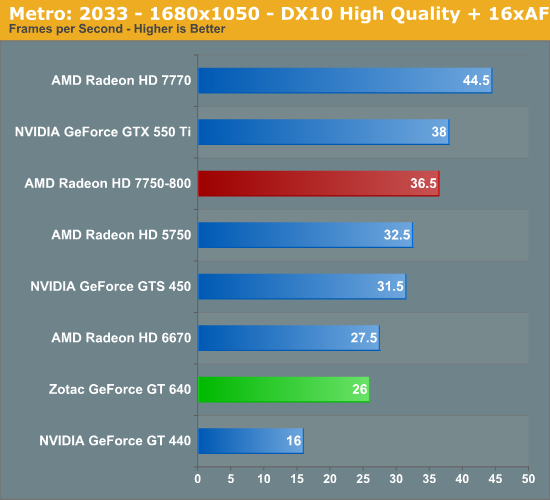 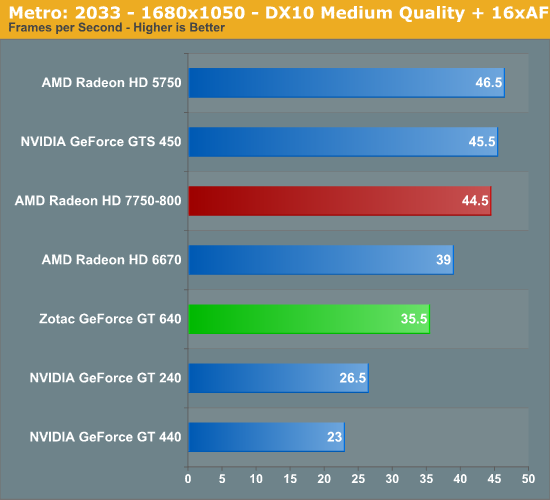 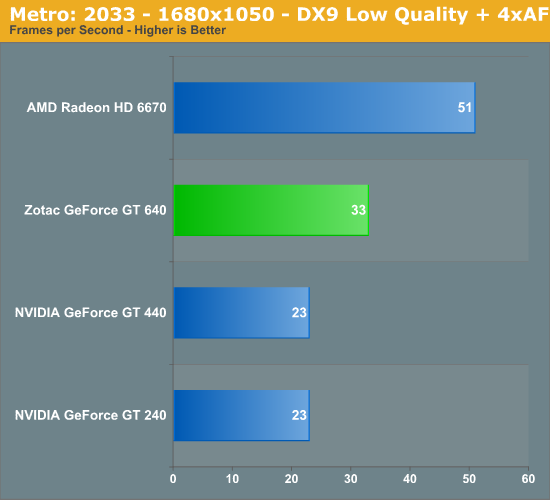 Relative to its competition the GT 640 improves slightly over what we saw in Crysis, but it’s still trailing the Radeon HD 6670, never mind the 7750. Performance has improved by over 50% over the GT 440, which is enough to push us past 30fps at 1680 with medium quality settings, but that’s as much as NVIDIA’s going to get out of the GT 640 here.

DiRT 3 is our next DX11 game. Developer Codemasters Southam added DX11 functionality to their EGO 2.0 engine back in 2009 with DiRT 2, and while it doesn't make extensive use of DX11 it does use it to good effect in order to apply tessellation to certain environmental models along with utilizing a better ambient occlusion lighting model. As a result DX11 functionality is very cheap from a performance standpoint. 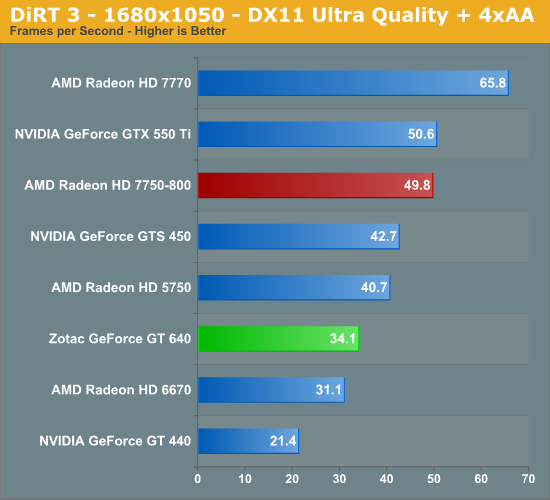 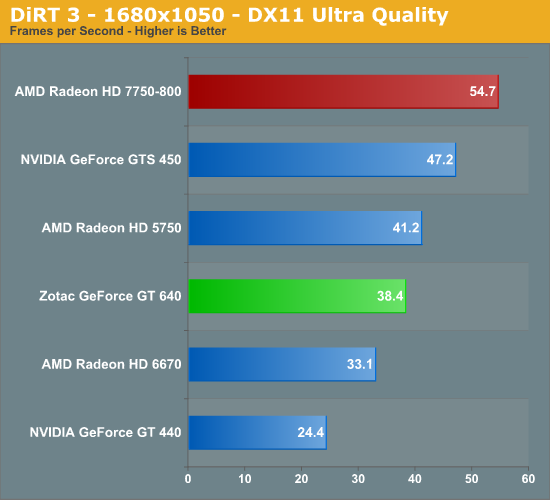 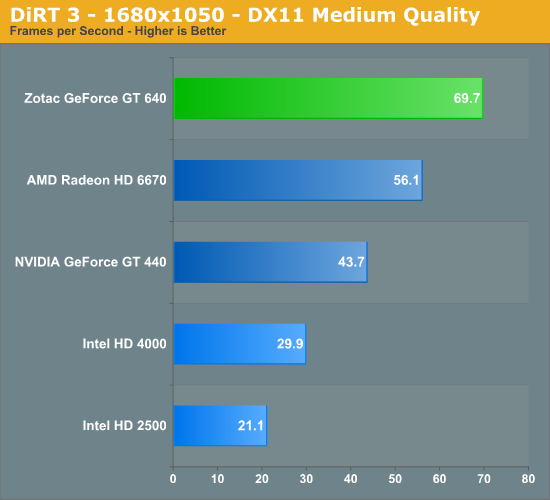 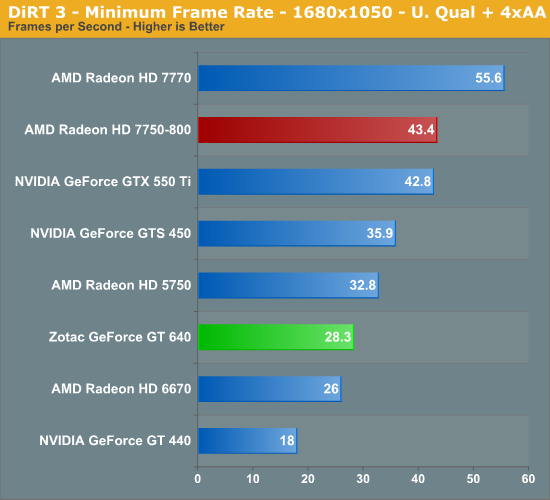 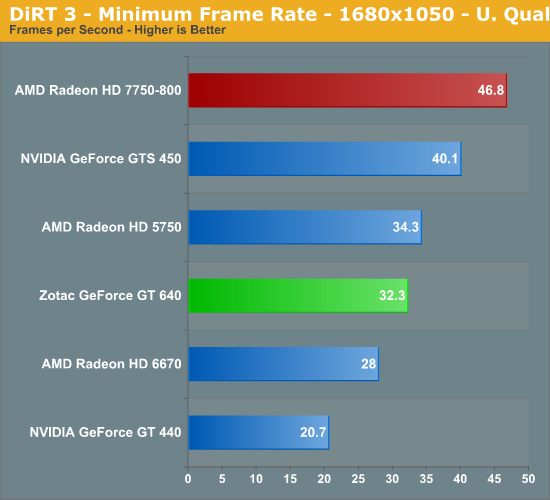 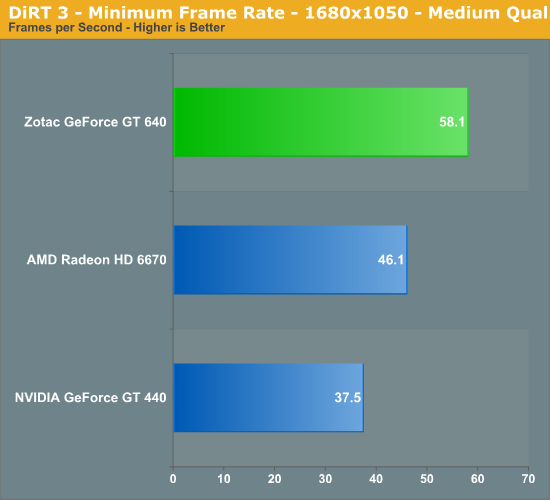 DiRT 3 is traditionally a game that favors NVIDIA here, and while the GT 640 finally surpasses the 6670, it’s by no means a great showing for the GT 640. Again it’s handily beaten by the 7750 and GTS 450, and for as light as DiRT 3 is, we still can’t even break 40fps at 1680 Ultra quality without AA. To achieve 60fps here it’s necessary to turn it down to Medium quality. Elsewhere performance relative to the GT 440 has increased by nearly 60%, which is a big jump for NVIDIA but not enough to surpass their competition.

Total War: Shogun 2 is the latest installment of the long-running Total War series of turn based strategy games, and alongside Civilization V is notable for just how many units it can put on a screen at once. 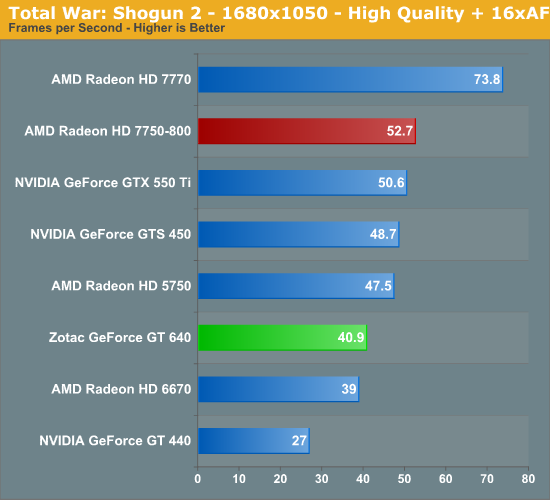 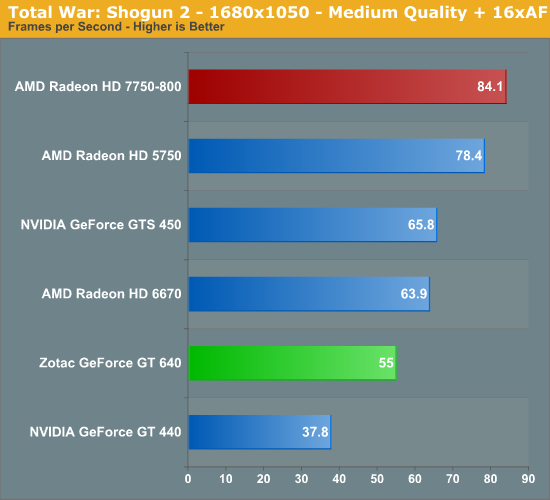 Under Shogun the story is much the same. The GT 640’s performance relative to the anemic GT 440 has greatly improved, jumping up by upwards of 50%, but it trails everything faster than a Radeon HD 6670. At the very least Shogun 2 is a relatively non-intensive game at 1680, so even at high quality the GT 640 is still achieving better than 40fps. 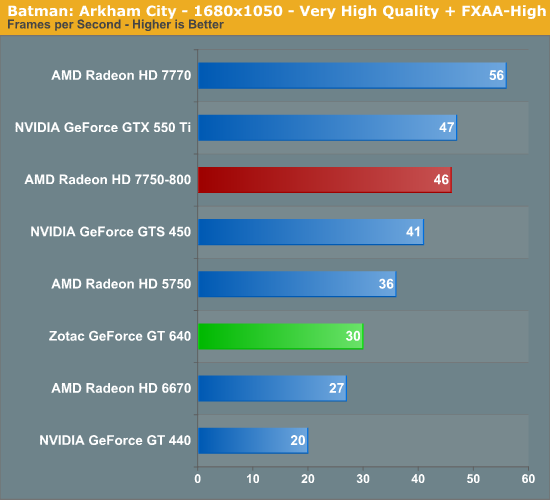 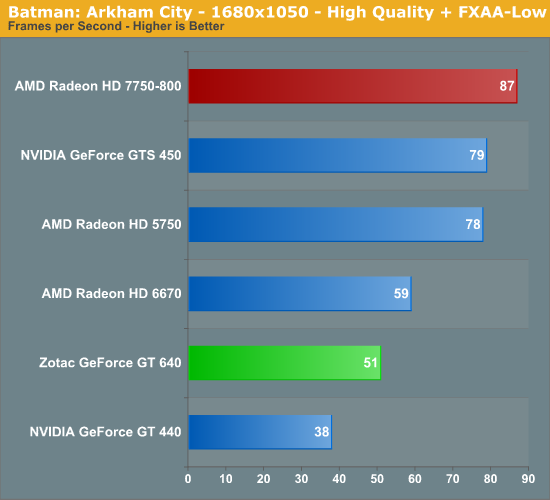 Batman: Arkham City is another game that traditionally favors NVIDIA’s GPUs, but again this isn’t much of a help here. At 1680 with Very High quality the GT 640 can just crack 30fps, and if we drop down to High quality that becomes a far more playable 51fps. But at the same time this leads to it greatly trailing the usual suspects at all configurations, and even the 6670 pulls ahead at High quality. Even the performance gains relative to the GT 440 have tapered off a bit, with the GT 640 only picking up 34% at High quality.