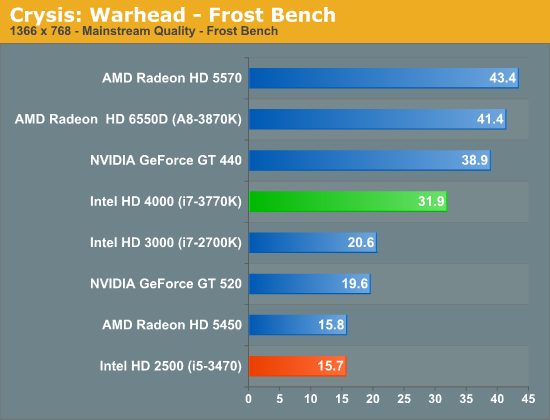 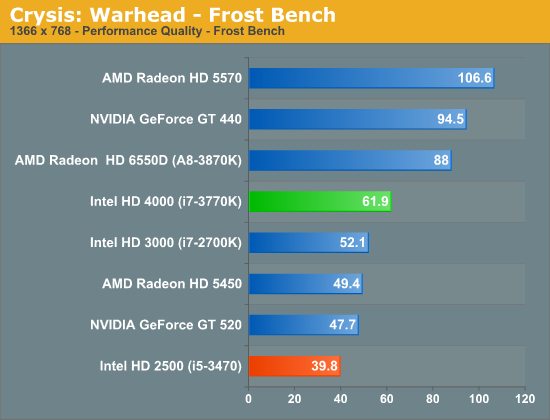 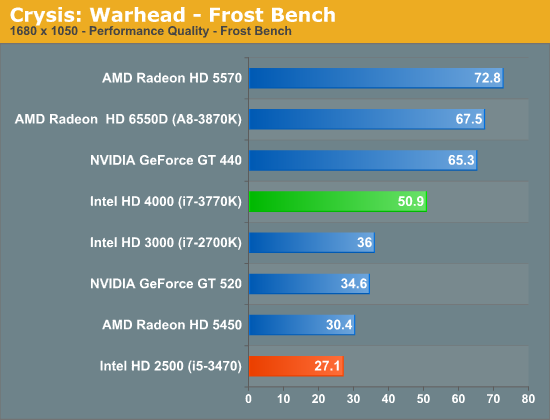 While Crysis on the HD 4000 was downright impressive, the HD 2500 is significantly slower.

Our next graphics test is Metro 2033, another graphically challenging game. Since IVB is the first Intel GPU to feature DX11 capabilities, this is the first time an Intel GPU has been able to run Metro in DX11 mode. Like Crysis this is a game that is traditionally unplayable on Intel iGPUs, even in DX9 mode. 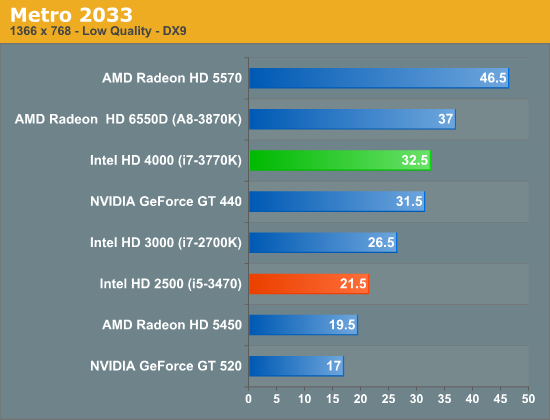 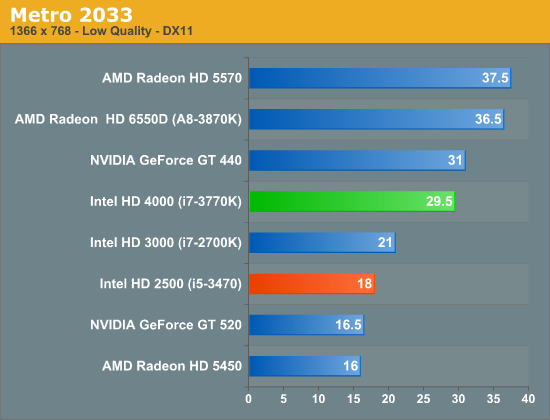 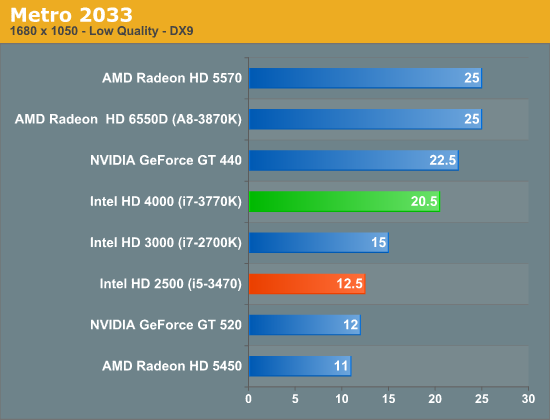 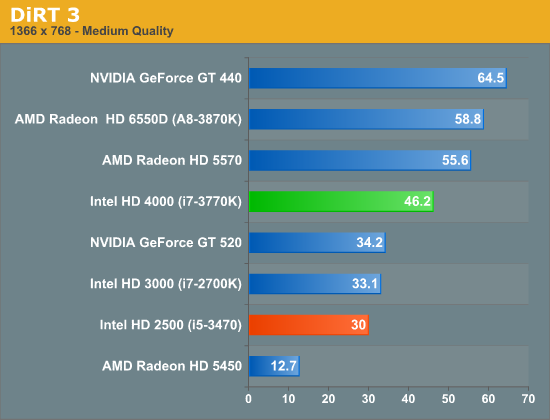 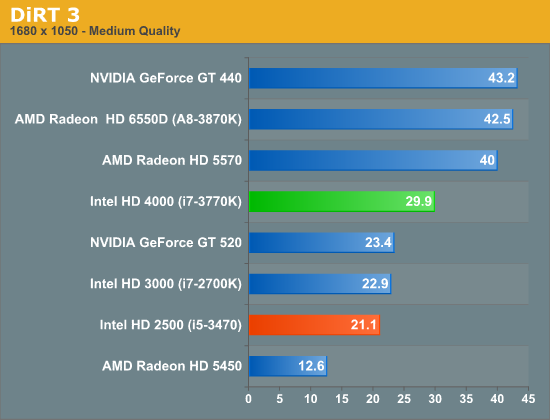 It's worth noting however that this is the one game where we encountered something that may be a rendering error with Ivy Bridge. Based on our image quality screenshots Ivy Bridge renders a distinctly "busier" image than Llano or NVIDIA's GPUs. It's not clear whether this is causing an increased workload on Ivy Bridge, but it's worth considering. 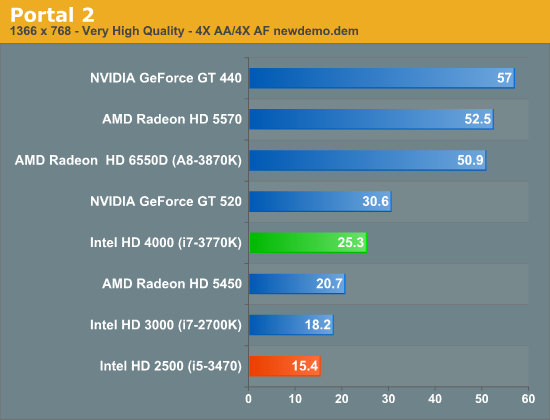 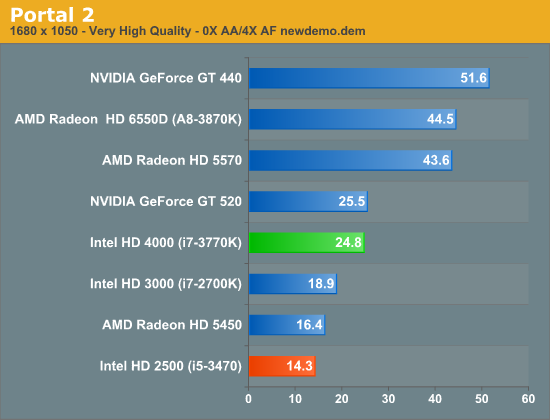 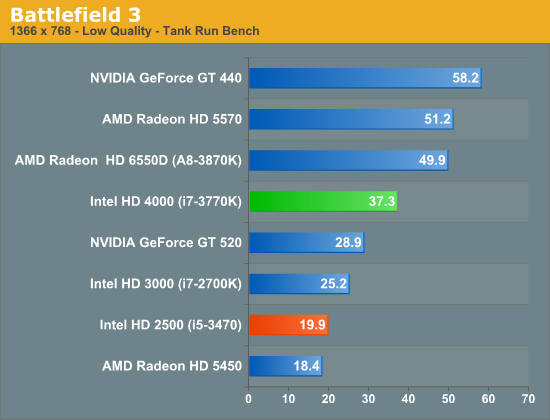 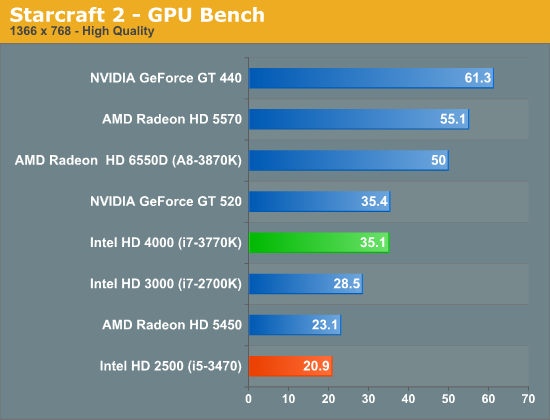 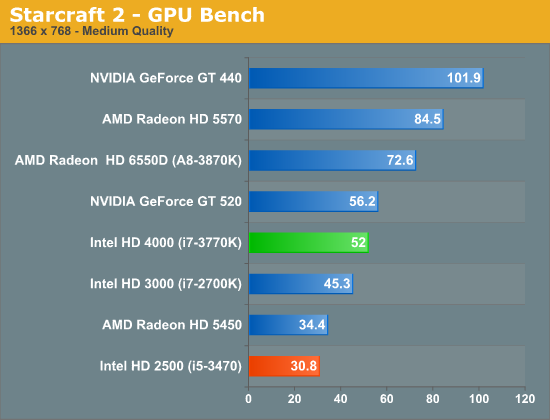 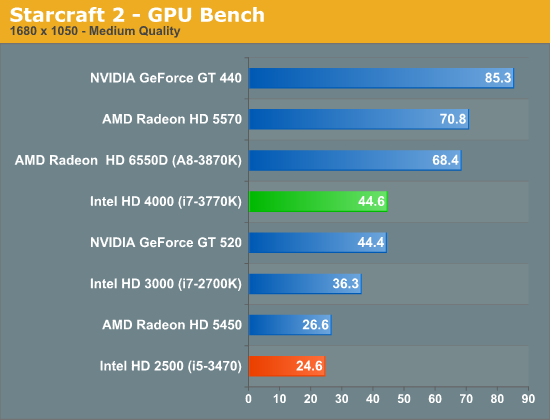 Starcraft 2 performance is borderline at best on the HD 2500. At low enough settings the HD 2500 can deliver an ok experience, but it's simply not fast enough.

Bethesda's epic sword & magic game The Elder Scrolls V: Skyrim is our RPG of choice for benchmarking. It's altogether a good CPU benchmark thanks to its complex scripting and AI, but it also can end up pushing a large number of fairly complex models and effects at once. This is a DX9 game so it isn't utilizing any of IVB's new DX11 functionality, but it can still be a demanding game. 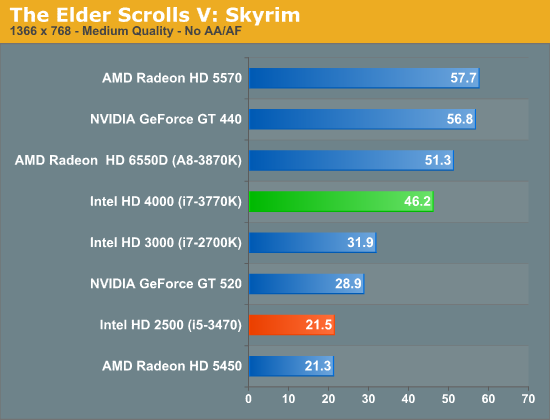 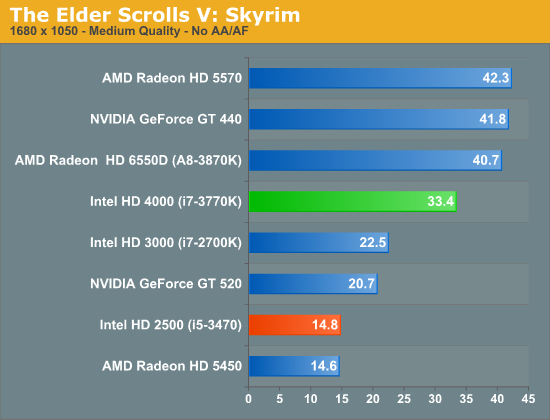 At lower quality settings, Intel's HD 4000 definitely passed the threshold for playable in Skyrim on average. The HD 2500 is definitely not in the same league however. At 21.5 fps performance is marginal at best, and when you crank up the resolution to 1680 x 1050 the HD 2500 simply falls apart.

Switching gears for the moment we have Minecraft, our OpenGL title. It's no secret that OpenGL usage on the PC has fallen by the wayside in recent years, and as far major games go Minecraft is one of but a few recently released major titles using OpenGL. Minecraft is incredibly simple—not even utilizing pixel shaders let alone more advanced hardware—but this doesn't mean it's easy to render. Its use of massive amounts of blocks (and the overdraw that creates) means you need solid hardware and an efficient OpenGL implementation if you want to hit playable framerates with a far render distance. Consequently, as the most successful OpenGL game in quite some number of years (at over 5.5mil copies sold), it's a good reminder for GPU manufacturers that OpenGL is not to be ignored. 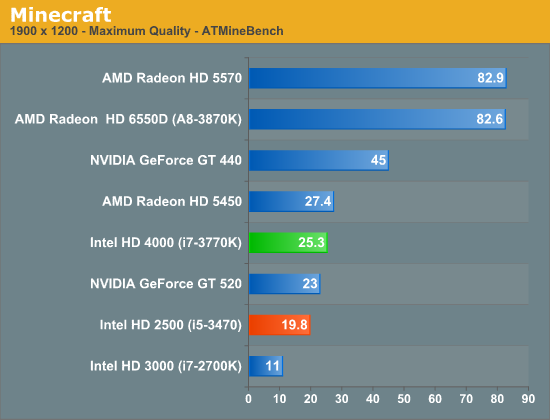 Our test here is pretty simple: we're looking at lush forest after the world finishes loading. Ivy Bridge's processor graphics maintains a significant performance advantage over the Sandy Bridge generation, making this one of the only situations where the HD 2500 is able to significantly outperform Intel's HD 3000. Minecraft is definitely the exception however as whatever advantage we see here is purely architectural. 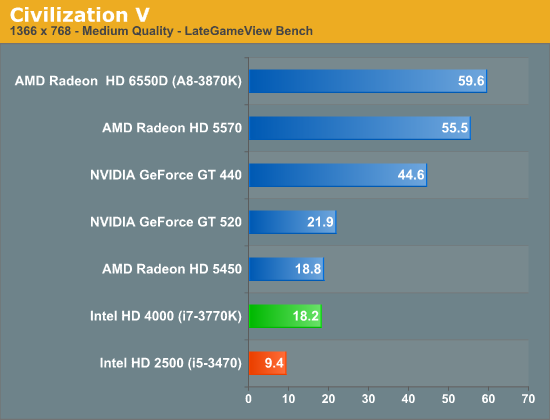 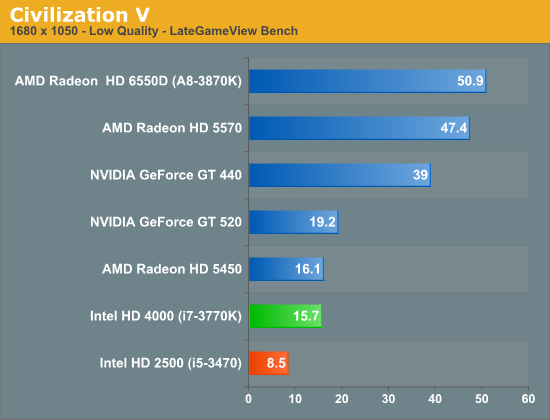 Civilization V was an extremely weak showing on the HD 4000 when we looked at it last month, and it's even worse on the HD 2500. Civ players need not bother with Intel's processor graphics, go AMD or discrete.