The Impact of Larger Memory

Apple doubled memory capacity on the new iPad to 1GB, marking the first time in recent history that Apple's flagship product offers a similar amount of memory to the current crop of high-end Android devices. Apple's iOS can do a relatively good job with limited system memory as it will conservatively unload applications from memory in the event that it needs to free up more space. iOS does not support paging to flash, making DRAM size a hard limit for developers looking to really push the platform. 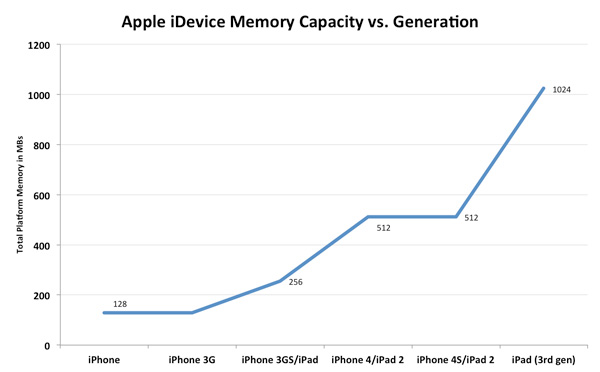 Apple has always been conservative on DRAM sizing because it's a great way of reducing the BOM (Bill of Materials) cost. If Apple can make up for having less DRAM by being more aggressive in software (read: kicking apps out of memory), it's a tradeoff that makes sense. It's really Apple's foray into gaming that has added pressure to increase memory sizes.

With the move to the Retina Display, the amount of memory needed to store a single frame increases by 4x—from 3MB to 12MB. Assuming two buffered frames you're looking at 24MB of RAM just to smoothly display what you're seeing on the screen.

The bigger problem isn't the frame buffer, but rather all of the other data you need (e.g. level data, textures, etc...). The higher the screen resolution, the more important it is to have higher quality assets in your game. Texture compression can go a long way, but at some point there's simply more data to deal with as game complexity increases. It's not just about the increase in resolution either. As GPU horsepower increases, so will the complexity of what game developers try to build.

While the frame buffer size increased thanks to the Retina Display, total system memory increased by a much larger amount. With 1GB of memory, game developers are now less constrained.

A more immediate benefit is apps and web pages will remain resident in memory longer as you open open up and switch to other apps. For example, on the iPad 2 if I open four tabs in Safari (AT, Engadget, Reddit, and Tech Report), open iPhoto, run Infinity Blade 2 and GTA 3, switching between the latter two will always require a full game reload (as in you see the intro and everything before you pick up where you left off). On the new iPad, with the same setup, I can switch between Infinity Blade 2 and GTA 3 and automatically resume where I last left off thanks to the extra DRAM. You can still create a scenario where even 1GB isn't enough, it's just that the limit is now higher than it was on the iPad 2.