Intel sent us a 240GB and 60GB SSD 520 for review, but the performance specs of the entire family are in the table below:

The Intel SSD 520 is available in both 9.5mm and 7mm versions, with the exception of the 480GB flavor that only comes in a 9.5mm chassis. The 520's uses Intel's standard 7mm chassis with a 2.5mm removable plastic adapter that we've seen since the X25-M G2. The plastic adapter allows the drive to fit in bays designed for 9.5mm drives. Note that Intel doesn't ship shorter screws with the 9.5mm drives so you can't just remove the plastic adapter and re-use the existing screws if your system only accepts a 7mm drive.

Inside the drive we see the oh-so-familiar SandForce SF-2281 controller and Intel 25nm MLC NAND. The controller revision appears unchanged from other SF drives we've seen over the past year. The PCB design is unique to the 520, making it and the custom Intel firmware the two noticeable differences between this and other SF-2281 drives. 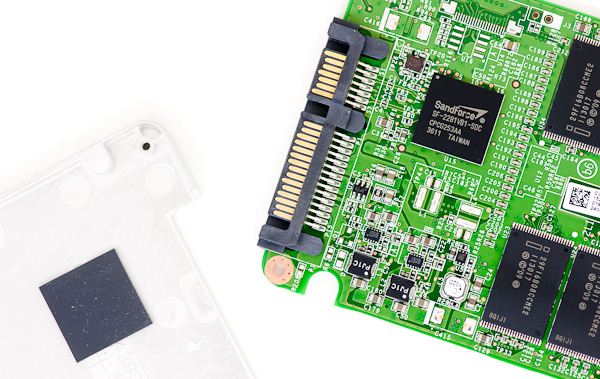 I've explained how the SF-2281 works in the past, but for those of you who aren't familiar with the technology I'll provide a quick recap. Tracking the location of data written to an SSD ends up being one of the most difficult things a controller has to do. There are a number of requirements that must be met. Data can't be written to the same NAND cells too frequently and it should be spread out across as many different NAND die as possible (to improve performance). For large sequential transfers, meeting these (and other) requirements isn't difficult. Problems arise when you've got short bursts of random data that can't be combined. The end result is leaving the drive in a highly fragmented state that is suboptimal for achieving good performance.

You can get around the issue of tracking tons of data by simply not allowing small groups of data to be written. Track data at the block level, always requiring large writes, and your controller has a much easier job. Unfortunately block mapping results in very poor small file random write performance as we've seen in earlier architectures so this approach isn't very useful for anything outside of CF/SD cards for use in cameras.

A controller can rise to the challenge by having large amounts of cache (on-die and externally) to help deal with managing huge NAND mapping tables. Combine tons of fast storage with a fast controller and intelligent firmware and you've got a good chance of building a high performance SSD. 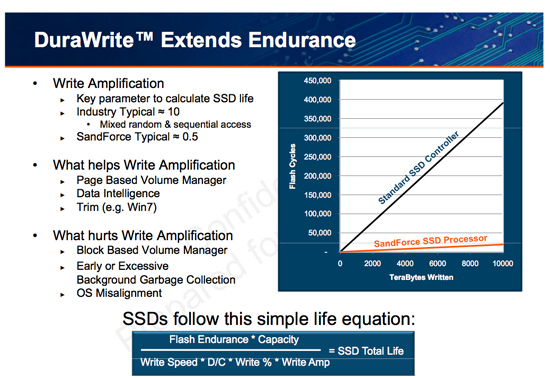 SandForce's solution leverages the work smart not hard philosophy. SF controllers reduce the amount of data that has to be tracked on NAND by compressing any data the host asks to write to the drive. From the host's perspective, the drive wrote everything that was asked of it, but from the SSD's perspective only the simplest representation of the data is stored on the drive. Running real-time compression/de-duplication algorithms in hardware isn't very difficult and the result is great performance for a majority of workloads (you can't really write faster than a controller that doesn't actually write all of the data to NAND). The only limit to SandForce's technology is that any data that can't be compressed (highly random bits or data that's already compressed) isn't written nearly as quickly.

Intel does a great job of spelling out the differences in performance depending on the type of data you write to the SSD 520, but it's something that customers of previous Intel SSDs haven't had to worry about. Most client users stand to benefit from SandForce's technology and it's actually very exciting for a lot of enterprise workloads as well, but you do need to pay attention to what you're going to be doing with the drive before deciding on it.

The Intel SSD 520 works flawlessly with the latest version of Intel's SSD Toolbox. The toolbox allows you to secure erase the drive from within Windows, and it also allows you to perform firmware updates and pull SMART info from the drive. Unlike other SandForce toolboxes, Intel's software works fine with Intel's RST drivers installed. 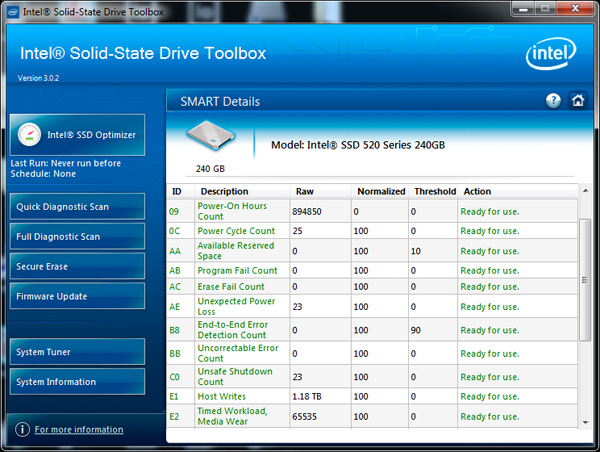