As always, we wrap up our look at a new video card with a look at the physical performance attributes: power consumption, temperatures, and noise. With the 7970 we saw what is possible with Tahiti when AMD is trying to maximize their performance, but how will things stack up with the lower power 7950? Let’s find out.

Please note that we’ve decided to include our reference 7950 in these charts, even though none of AMD’s partners will be shipping a card in this exact configuration. Typically we wouldn’t do this, but as our partner cards are overclocked it’s the only stock performance card we have. Furthermore it provides an interesting contrast to the 7970, since they’re built on the same hardware. With that said, the Sapphire and XFX cards are far more representative of the cooling performance you’ll see with retail cards.

Since the launch of the 7970 we’ve finally seen the release of tools that can read the VIDs of Tahiti GPUs. For our review we have four 7950s in our hands, and one of them is not like the others. Both of our AMD cards and our XFX card have a VID of 1.093v, however the Sapphire card is significantly lower. So low that we thought this was an error and went through 3 different tools just to be sure it wasn’t. Sure enough, our Sapphire 7950 does indeed ship at 0.993v, roughly 0.1v below our other 7950s and lower than what we thought Tahiti could operate at. The fact that the Sapphire is overclocked makes this all the more impressive, and we’ll see how this plays out in a moment. 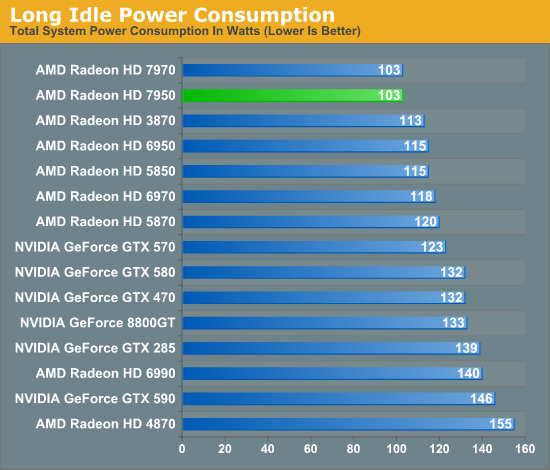 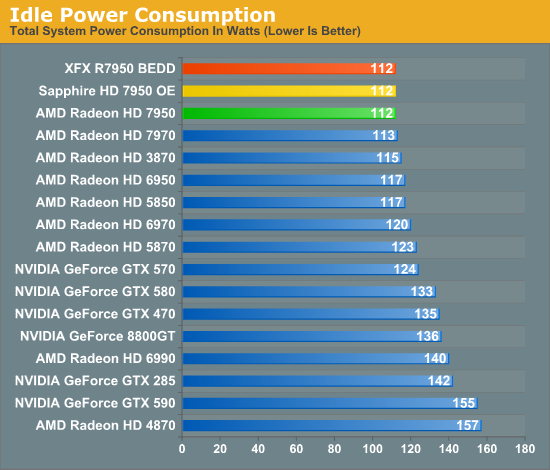 Starting as always with idle power, there aren’t many surprises here.  Power islands not only give the 7000 series great idle power characteristics, but they also greatly diminish the difference between GPUs when it comes to idle power consumption. As a result the entire 7950 lineup is at 112W at the wall, consistently 1W below the 7970 and a good 20W below the GTX 580.

The situation with long idle power is much the same. As AMD’s ZeroCore power technology effectively powers down all the workhorse components of the GPU, the only thing left is a small constant load from the bus controller, giving us 103W on both the 7970 and 7950. 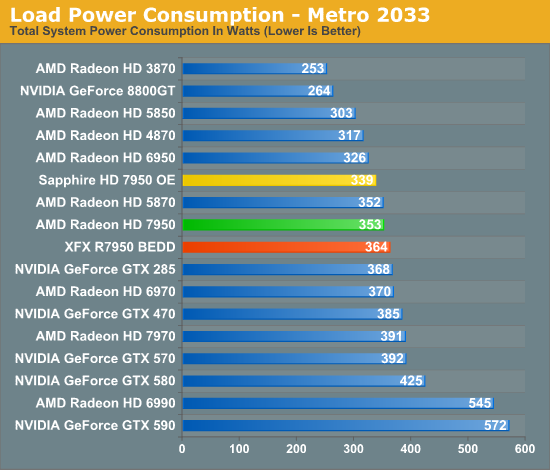 Meanwhile it’s under load that the physical performance attributes of the 7950 really begin to shine. Compared to the GTX 580, our 7950 equipped testbed draws 72W less at the wall; the performance advantage we saw in Metro earlier makes this all the more impressive. The 7950 also pulls less power than the 7970 here as we’d expect, leading to a difference of 38W at the wall.

As for our two partner cards, the Sapphire does particularly well here thanks to its very low VID, while the XFX does a bit worse than the reference 7950, likely due to its stock VID coupled with the factory overclock. 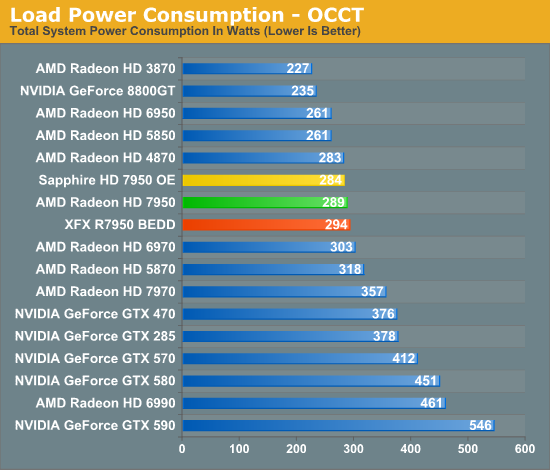 Under OCCT our 7950 cards begin to clump together in spite of their differences. With the reference 7950 at 289W, the Sapphire and XFX cards pull 5W less and 5W more respectively. It’s interesting to note here that as with the 7970 compared to the 6970, the 7950 is pulling more power than the 6950 even though both cards should have the same PowerTune limit. In practice it’s clear that the 7950 is more power hungry than the 6950 despite the PowerTune limit, so this needs to be taken into account accordingly. 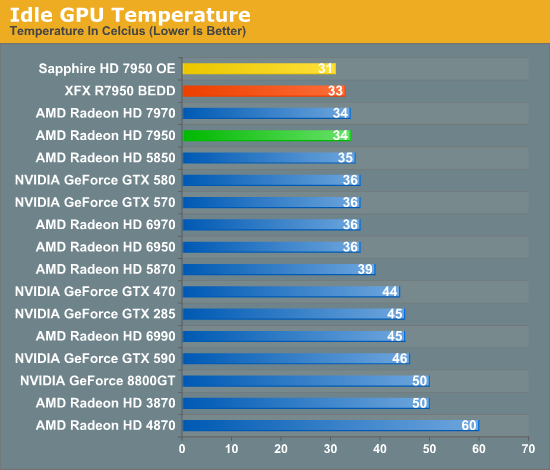 As the use of power islands has brought down the idle power consumption, so has it brought down idle temperatures. The 7970 already did well here and the reference 7950 does similarly well, while the open air coolers on the XFX and Sapphire cards take this one step further, pulling temperatures down to 33C and 31C respectively. 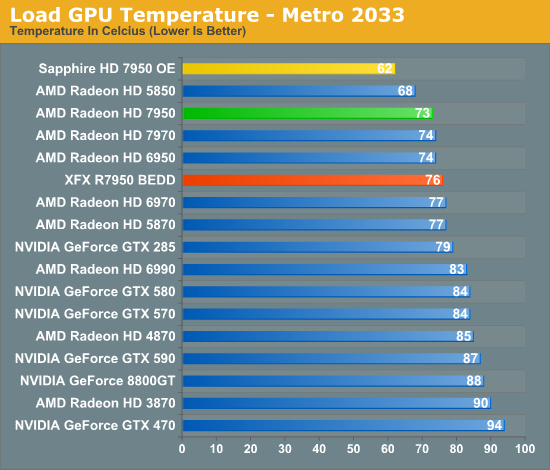 Meanwhile load temperatures are a mixed bag among the 7950s, and it’s not all good. Starting with the Sapphire 7950, we have an open air card with a very low VID that’s performing as we’d expect. The Sapphire card is extremely cool here, and this kind of gap is consistent with other near-200W cards we’ve seen in the past. Elsewhere, in the middle is the reference 7950, which is using AMD’s fully exhausting blower; this pushes almost all the heat outside of our case, but it does keep temperatures higher, and in this case very close to the 7970.

Finally we have the XFX card, which is the odd man out. The R7950 BEDD is an open air cooler and we’d expect performance closer to the Sapphire card, not performance worse than the reference 7950. 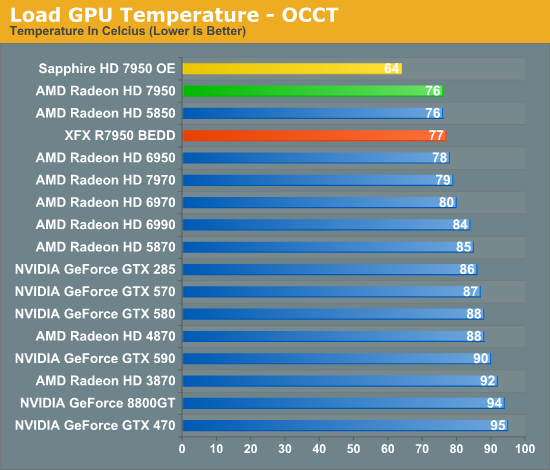 Under OCCT the results closely mirror what we saw with under Metro. The Sapphire is well in the lead among the 7950s, followed by the reference and XFX cards.  With virtually every other card pushing 80C or higher, the 7950s are in good company here, particularly compared to the 88C GTX 580 due to the lack of comprehensive power throttling on NVIDIA’s part. 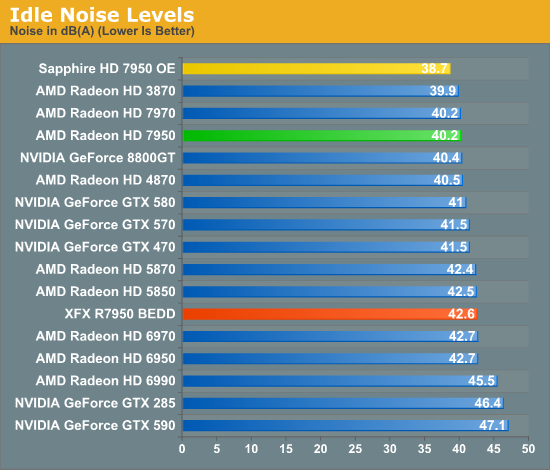 Last but not least we have our look at noise. The 7970’s cooler was already doing quite well at 40.2dB, but Sapphire takes this one step further with their open air cooler, bringing their idle noise down to 38.7dB. XFX on the other hand doesn’t fare as well, as their Double Dissipation cooler can’t rev down quite enough, coming in louder than the reference 7950 at 42.6dB. 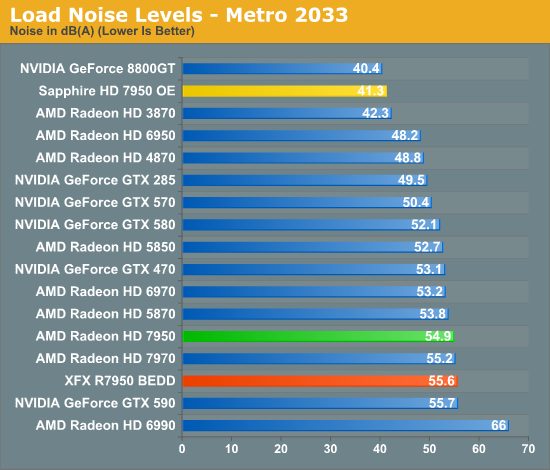 It’s looking at load noise that particularly drives home the potential of the Sapphire 7950. Sapphire has exploited their open air cooler for all it's worth, and as a result it’s quieter under load with Metro than half our cards are at idle—41.3dB is only 0.3dB louder than the GTX 580 at idle, never mind the other 7950s. The XFX meanwhile fares really, really poorly here for an open air cooler. This doesn’t appear to be a matter of an aggressive fan profile as we’ve already seen that its temperatures are close to the reference 7950, so there’s more going on here. 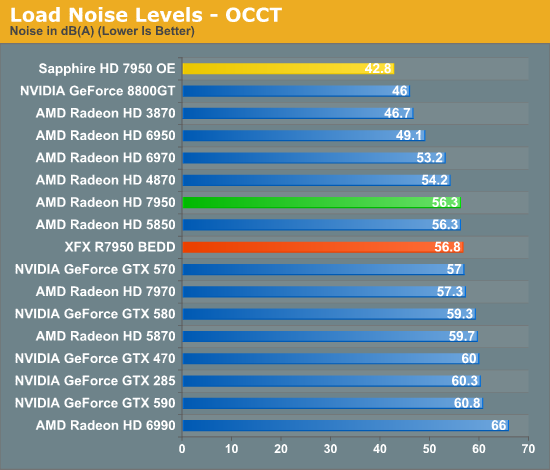 Even under OCCT the Sapphire 7950 still only hits 42.8dB, a particularly impressive showing when you consider that AMD’s reference 6900 series cards idle at 42.7dB. It’s not a silent card, but for most practical purposes it’s damn close. Meanwhile the XFX 7950 again fares poorly, coming in at 56.8dB. This is still quieter than the GTX 580 in this case, but it’s clearly disappointing.

Wrapping things up, as we stated in our introduction the vast selection of 7950s means that there’s going to be a wide range of performance for 7950 cards, and these results drive home the point nicely. The Sapphire 7950 simply gushes potential—not only is it a factory overclocked card, but it gives off so little heat and noise compared to anything else in its performance class that it’s unrivaled. Much of this no doubt is due to the extremely low VID of our sample and I strongly suspect that this a better voltage than the bulk of Sapphire 7950s can actually hit, so our results are most likely better than average. Still, even with more voltage there’s still plenty of thermal and acoustic headroom for the Sapphire 7950 to work with, so it should still be a well performing card regardless.

Overall it’s results like what we’ve seen with the Sapphire that are a large part of why AMD’s partners are strongly favoring open air coolers. But with that said, that potential can only be reached in a case with good airflow, meaning that the Sapphire 7950 (or any other open air 7950 for that matter) is likely a poor choice for a cramped case. Furthermore all of these open air cards are poor choices for CrossFire if they need to be directly adjacent to each other. A lot of boards offer usable PCIe x16 slots farther away from their first x16 slot, but this is not the case for all boards. Ultimately the lack of 7950 cards using a fully exhausting blower is definitely going to limit the CrossFire potential of the 7950.

Finally, we have the XFX 7950 BEDD. The 7970 BEDD was a very impressive card; the 7950 BEDD is not. It’s not possible to completely isolate any specific reason for the 7950 BEDD’s poor performance, but the most likely factors are the GPU quality and the ability of the card to transfer heat between the GPU and heatsink. With regards to quality, if the Sapphire 7950 has among the best 7950 GPUs then the 7950 BEDD has an average GPU if not worse; 1.093v is the same as our reference cards, but there’s still room for quite a bit of variance. Whereas when we’re looking at heat transfer we have to look at the much smaller vapor chamber the 7950 BEDD uses compared to the 7970 BEDD, along with what at first glance looks like too much thermal paste.

Given our temperature and power consumption data we’re heavily favoring the heat transfer theory; the 7950 BEDD just isn’t very good at transferring heat from the GPU. This is not to say that the 7950 BEDD is a bad card—our results are reasonable for a 200W card—but we’ve seen much better in the 7970 BEDD, never mind the other 7950 cards.