There are two aspects of today's launch that bother me: the lack of Quick Sync and the chipset. The former is easy to understand. Sandy Bridge E is supposed to be a no-compromise, ultra high-end desktop solution. The lack of an on-die GPU with Quick Sync support means you have to inherently compromise in adopting the platform. I'm not sure what sort of a solution Intel could've come to (I wouldn't want to give up a pair of cores for a GPU+QuickSync) but I don't like performance/functionality tradeoffs with this class of product. Secondly, while I'm not a SAS user, I would've at least appreciated some more 6Gbps SATA ports on the chipset. Native USB 3.0 support would've been nice as well. Instead what we got was effectively a 6-series chipset with a new name. As Intel's flagship chipset, the X79 falls short.

The vast majority of desktop users, even enthusiast-class users, will likely have no need for Sandy Bridge E. The Core i7 3960X may be the world's fastest desktop CPU, but it really requires a heavily threaded workload to prove it. What the 3960X doesn't do is make your gaming experience any better or speed up the majority of desktop applications. The 3960X won't be any slower than the fastest Sandy Bridge CPUs, but it won't be tremendously faster either. The desktop market is clearly well served by Intel's LGA-1155 platform (and its lineage); LGA-2011 is simply a platform for users who need a true powerhouse.

There are no surprises there, we came to the same conclusion when we reviewed Intel's first 6-core CPU last year. If you do happen to have a heavily threaded workload that needs the absolute best performance, the Core i7 3960X can deliver. In our most thread heavy tests the 3960X had no problems outpacing the Core i7 2600K by over 50%. If your livelihood depends on it, the 3960X is worth its entry fee. I suspect for those same workloads, the 3930K will be a good balance of price/performance despite having a smaller L3 cache. I'm not terribly interested in next year's Core i7 3820. Its point is obviously for those users who need the memory bandwidth or PCIe lanes of SNB-E, but don't need more than four cores. I would've liked to have seen a value 6-core offering instead, but I guess with a 435mm2 die size it's a tough sell for Intel management. 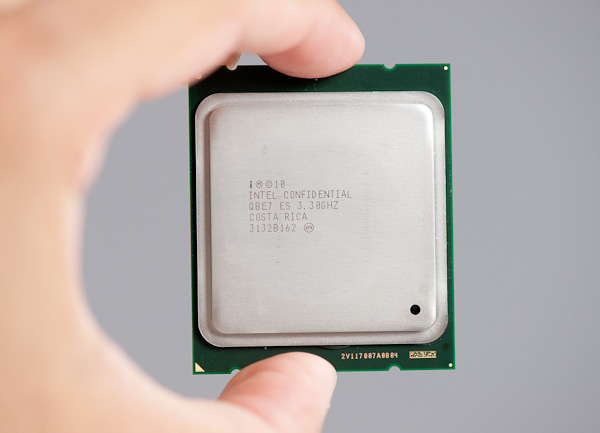 Of course compute isn't the only advantage of the Sandy Bridge E platform. With eight DIMM slots on most high end LGA-2011 motherboards you'll be able to throw tons of memory at your system if you need it without having to shop for workstation motherboards with fewer frills.

As for the future of the platform, Intel has already begun talking about Ivy Bridge E. If it follows the pattern set for Ivy Bridge on LGA-1155, IVB-E should be a drop in replacement for LGA-2011 motherboards. The biggest issue there is timing. Ivy will arrive for the mainstream LGA-1155 platforms around the middle of 2012. At earliest, I don't know that we'd see it for LGA-2011 until the end of next year, or perhaps even early 2013 given the late launch of SNB-E. This seems to be the long-term downside to these ultra high-end desktop platforms these days: you end up on a delayed release cadence for each tick/tock on the roadmap. If you've always got to have the latest and greatest, this may prove to be frustrating. Based on what we know of Ivy Bridge however, I suspect that if you're using all six of these cores in SNB-E that you'll wish you had IVB-E sooner, but won't be tempted away from the platform by a quad-core Ivy Bridge on LGA-1155.

I do worry about the long term viability of the ultra high-end desktop platform. As we showed here, some of the gains in threaded apps exceed 50% over a standard Sandy Bridge. That's tangible performance to those who can use it. With the growth in cloud computing it's clear there's demand for these types of chips in servers. I just hope Intel continues to offer a version for desktop users as well.