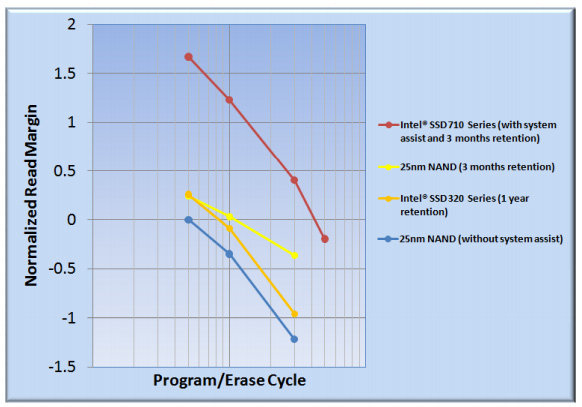 90K p/e cycles seems a bit high and I can't find any Intel documentation that actually quotes that number, it's just what I heard at the 710 briefing in San Francisco. Luckily Intel has another metric it likes to use: total bytes written.

You don't get TBW for client drives, but for enterprise drives Intel will tell you exactly how many tera or petabytes of random 4KB or 8KB data you can write to the drive. These values are "up to" of course as actual lifespan will depend on the specific workloads. 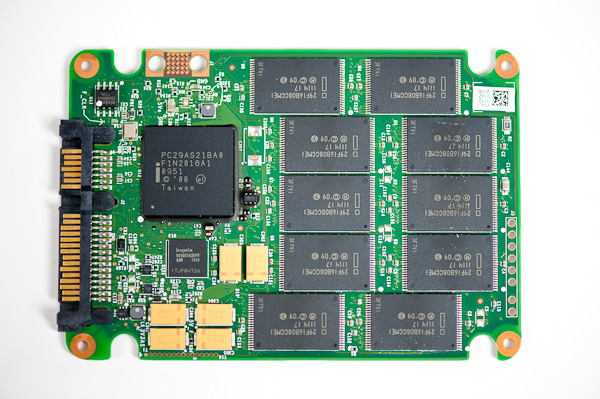 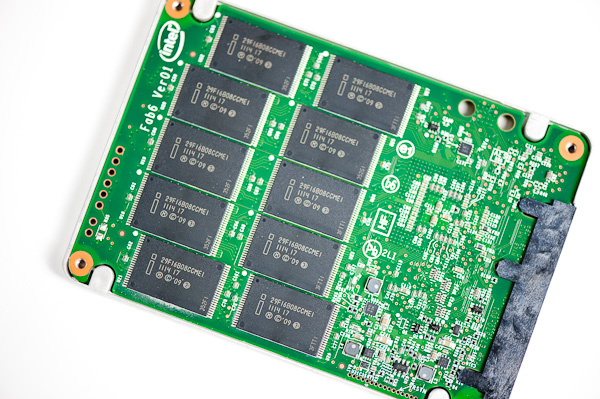 Opening up the 710 that Intel sent me I found a total of 20 NAND packages on-board. This isn't surprising as Intel's controllers have always supported 10 parallel NAND channels, in this case the 710 uses two packages per channel and interleaves requests to them. Each NAND package however has 128Gbit (16GBytes) of NAND inside in the form of 2 x 8GB 25nm MLC-HET die. Multiply all of that out and you get 320GB of NAND inside this 200GB drive. 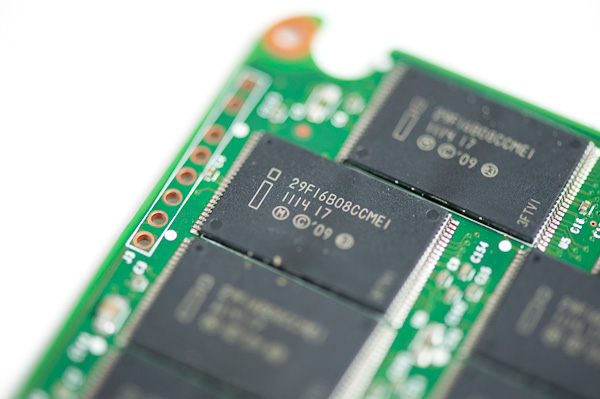 If we run the p/e count with 320GB as the actual amount of NAND available, it works out to be just under 40K p/e cycles per cell. The significant spare area on the 710 increases the drive's projected lifespan by 55%! Intel even recommends setting aside another 20% of the drive if you need a longer lifespan. An extra 20% spare area will give you another 50% increase in total bytes written. Tinkering with spare area just helps reduce write amplification, it doesn't magically make the NAND cells last longer.

If we believe Intel's specifications, MLC-HET actually sounds pretty decent. You get endurance in the realm of the X25-E but at significantly lower cost and with more reasonable capacity options.

Thankfully we don't need to just take Intel's word, we can measure ourselves. For the past couple of years Intel has included a couple of counters in the SMART data of its SSDs. SMART attribute E2h gives you an accurate count of how much wear your current workload is putting on the drive's NAND. To measure all you need to do is reset the workload timer (E4h) and run your workload on the drive for at least 60 minutes. Afterwards, take the raw value in E2h, divide by 1024 and you get the percentage of wear your workload put on the drive's NAND. I used smartmontools to reset E4h before running a 60 minute loop of our SQL benchmarks on the drive, simulating about a day of our stats DB workload.

Once the workloads finished looping I measured 0.0145% wear on the drive for a day of our stats DB workload. That works out to be 5.3% of wear per year or around 18.9 years before the NAND is done for. I'd be able to find more storage in my pocket before the 710 died due to NAND wear running our stats DB.

For comparison I ran the same test on an Intel SSD 320 and ended up with a much shorter 4.6 year lifespan. Our stats DB does much more than just these two tasks however - chances are we'd see failure much sooner than 4.6 years on the 320. An even heavier workload would quickly favor the 710's MLC-HET NAND.

But what about performance? SLC write speeds are much higher than MLC, but Intel's MLC performance has come a long way since the old X25-E. Let's get to the benchmarks.

We're still building up our Enterprise Bench data so forgive the lack of comparison data here. We included a number of consumer drives simply as a reference point.