The Eagle Ridge Thunderbolt controller is home to two Thunderbolt channels, each one is good for up to 10Gbps in either direction (up or downstream). That works out to be 20Gbps of bandwidth per channel or 40Gbps aggregate between the two. You can only send two channels worth of data down a single Thunderbolt cable, so there's no point to having more than two from a performance standpoint unless you have more than one port on your system.

If DisplayPort and PCIe traffic are indeed carried on separate channels, then the Thunderbolt Display by itself is eating up around 70% of the bandwidth of a single channel on its own (2560 x 1440 x 32bpp x 60Hz with 8b/10b encoding > 6.75Gbps). That leaves 10Gbps in each direction for PCIe traffic. If we look at our benchmarks from the previous section we see that we can hit just under 2Gbps with all of the auxiliary interfaces (GigE, FW800, USB2) running. Given our previous investigation with the Promise Pegasus we know that 8Gbps is feasible there as well. It's possible, that with everything running at once, we could actually run into bottlenecks with Thunderbolt.

To find out I ran a few tests. First I needed a baseline so I threw four SF-2281 SSDs into the Pegasus R6 chassis and configured them in a RAID-0 array. I ran a 2MB sequential read test (QD=16) and measured 909MB/s from the array. This value was obtained without the Thunderbolt Display connected, only the Pegasus R6.

For my third test I added a Gigabit Ethernet transfer from a file server to a local SSD using the GigE port on the display. During this test I was also playing back music using the Thunderbolt Display's internal audio codec and speakers. I re-ran the Pegasus test and got 855MB/s.

For my final test I re-ran the third test but added a FireWire 800 to USB 2.0 SSD transfer, both connected to the Thunderbolt Display. I also fired up the FaceTime HD camera on the display using Photo Booth and left it on during the test. The final performance score from the Pegasus was 817MB/s. 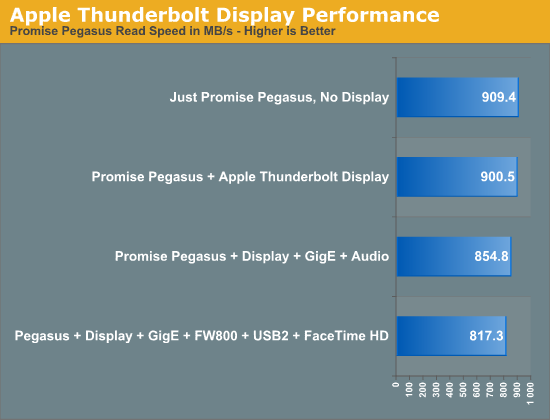 With everything running Thunderbolt performance took a 10% hit. Note that the standard Pegasus configuration isn't able to hit these data rates to begin with, so unless you've pulled out the 12TB of storage and stuck in your own SSDs you won't see any performance drop.

What this does tell me however is the ultra high end users that are looking to daisy chain multiple Thunderbolt storage boxes together may not want to do so. I only have a single Pegasus R6 on hand, but I'm guessing there will be significant performance drop off after the first box. Not that I'm complaining about being able to push nearly 1GB/s over a $49 cable from a notebook, I'm just trying to give a heads up to those who may have aspirations of even higher performance.