The SGS2 has both 2.4 and 5 GHz WiFi connectivity courtesy of Broadcom’s newest combo chip, the BCM4330. It is the logical successor to BCM4329, which we saw adopted darn-well almost universally in the previous generation, from the iPhone 4 to SGS1. BCM4330 still is a single spatial stream combo solution, but what’s different is that alongside Bluetooth 4.0+HS support is an on-chip power amp for 5 GHz WLAN in addition to last gen’s 2.4 GHz power amp (or another version which had both). There’s also still FM receive and transmit support.

That puts SGS2 in an incredibly small list of smartphones that include 5 GHz WLAN support, which is critical going forwards as the 2.4 GHz ISM band gets even more crowded. I’ll spare you my usual rant about how at every conference and trade show 2.4 GHz turns into a completely unusable nightmare.

As with every other radio, we have to do the receive sensitivity dance and make sure nothing is broken. I tested the SGS2 alongside an SGS 4G at my house with both an Airport Extreme (5th Gen) and WRT54G-TM boosted to 184 mW. SGS2 WiFi reception on 2.4 GHz is darn near identical to the previous generation. 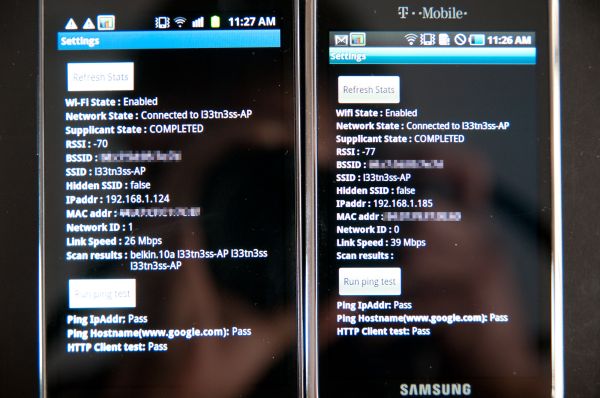 There’s something deceptive about this however, and it’s that although Samsung has chosen to go the usual compressed-dynamic-range route with cellular bars, the WLAN bars seem to be more linearized. Thus where I’m used to seeing every other smartphone show max (until you’re right about to fall off), the SGS2 actually doesn’t lie to me and shows fewer bars. Until I ran around and looked at RSSI in dBm, I suspected SGS2 had WLAN sensitivity issues where there don’t appear to be any. One small thing I did notice is that SGS2 (and BCM4330) seems to only connect at long guard interval (eg 65 Mbps maximum for single stream, 20 MHz channels), where SGS1 and BCM4329 connected at 72 Mbps short guard interval.

In practice, actually using the 5 GHz radio on SGS2 is a bit challenging, since Android 2.x has no proper prioritization for 5 GHz over 2.4 GHz when presented with the same SSID running on both bands. I’d obviously like to see the less-crowded 5 GHz band used before the more crowded 2.4 GHz band. 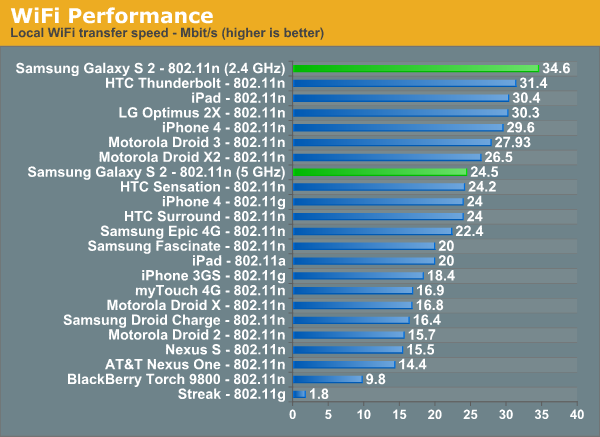 Performance on 2.4 GHz with BCM4330 in SGS2 is scorching, at 34.6 Mbps when downloading a 100+ MB PDF over the local network. On 5 GHz performance drops a bit for some reason.

To say that SGS1’s GPS was a disaster is a bit of an understatement, at least on the variants that I got my hands on. What’s worse, for a lot of those phones, GPS is still broken to this day. Thankfully Samsung learned from that experience and didn’t make the same mistake twice, and SGS2 has a different GPS entirely and much better time to first fix as a result.

I mentioned it earlier, but SGS2 uses a SiRFstarIV GSD4t GPS this time around. It’s a bit interesting that Samsung is using a discrete GPS considering the fact that Exynos 4210 has its own integrated GPS baseband. 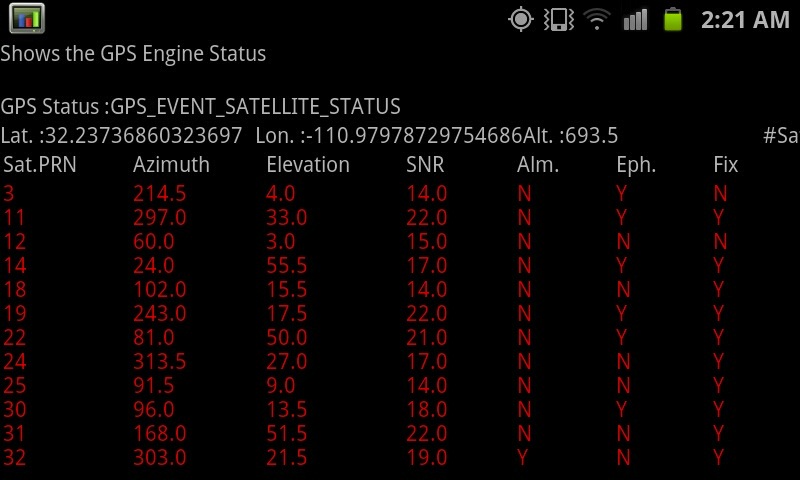 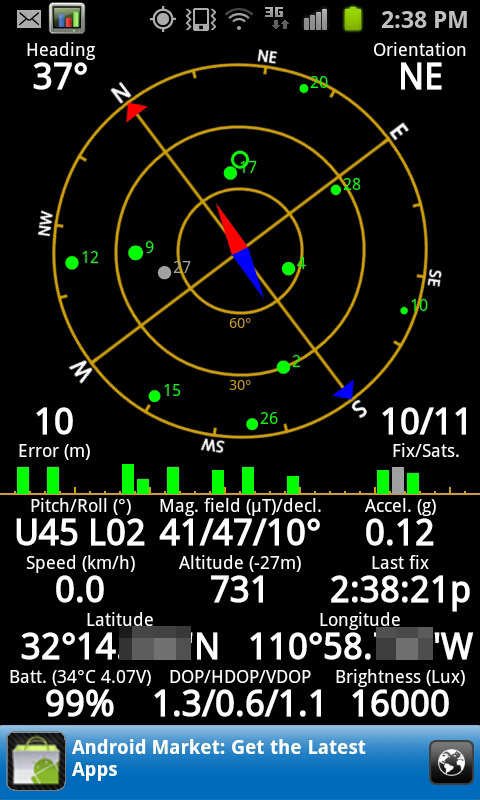 I measured time to a warm fix at around 3–5 seconds with the AGPS data already downloaded, which is pretty in line with modern devices. From a cold start, it’s anywhere between 10–15 seconds, though sometimes faster. I’ve seen faster on some other phones I won’t name, but GPS works this time around, and works well. I took the SGS2 on a 7-hour long road trip with me and used its GPS continually with no issues.

Inside the SGS2 is an Audience 1026 voice processor, which rejects noise which is common between the primary microphone at the bottom of SGS2 and secondary microphone at the top. Discrete noise canceling solutions are pretty par for the course lately, and it’s good to see SGS2 not excluded from that trend.

Inside the SGS2’s excellent ServiceMode menu is an option to enable and disable Audience processing, which naturally we explored. I recorded a call placed from the SGS2 in the presence of very loud background noise with Audience turned on and off, and you can hear the difference between the two, running through the same test. Only at the most extreme ambient volume level is background noise noticeable on SGS2.

Call quality on the SGS2 is a bit more interesting, I placed a test to the local ASOS and recorded it over line-in as we’ve done before. Inside ServiceMenu the device will even show what type of voice coder is used given present network conditions, which is AMR-NB on AT&T.

Here the SGS2 doesn’t sound quite as good as other phones I’ve recorded on UMTS, unfortunately.

Speakerphone is the last thing on the list, and unfortunately at maximum volume during a voice call, the SGS2 doesn't measure extremely well. This is puzzling, since for navigation and other system sounds, the SGS2 is very loud. Clearly something isn't set properly, and the SGS2 has the potential to be louder on speakerphone for calls with appropriate tweaking. 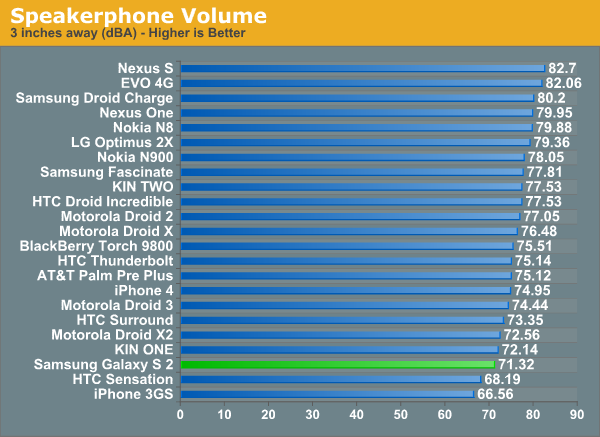