There have been a number of teardowns of the SGS2, and for the most part usually there isn’t a need to open up devices unless the FCC photos don’t suffice. This time around I still have a number of questions about what component choices had been made for the SGS2, so it went under the screwdriver (and emerged unscathed) just so we could get a glimpse at the goods.

SGS2 comes apart easily enough, with a few philips (no Torx bits) screws on the back and then a couple prods with a plastic tool to get the snaps off. Construction in this regard is very similar to the original SGS. After that, you have access to the PCB, backside, and frame.

You can see how SGS2 achieves its thinness by looking at the layout. The PCB doesn’t run underneath the battery - the majority of device thickness is defined by the SAMOLED+ panel plus battery thickness.

In addition, the SGS2 locates the cellular antenna at bottom in a modular speaker plus antenna module that snaps in and out of the plastic backside. The depth of SGS2 at its thickest seems governed by this speaker and its resonating chamber. Off to the other side is the bottom microphone, cellular feed cable, and gold contacts for getting that connected to the silver antenna.

There’s another second antenna to the opposite side of the module, which is for Bluetooth and WiFi. 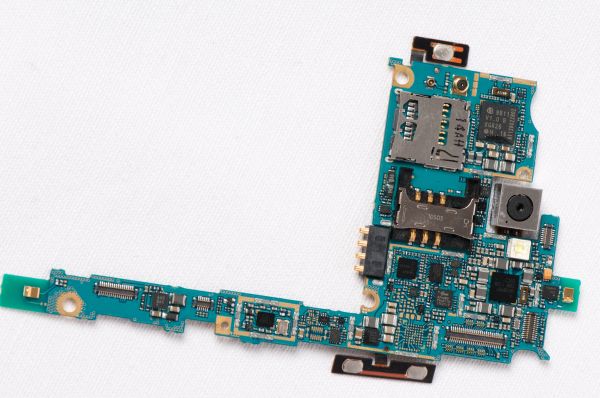 If we turn our attention to the PCB we can see the rest of SGS2’s interesting bits. 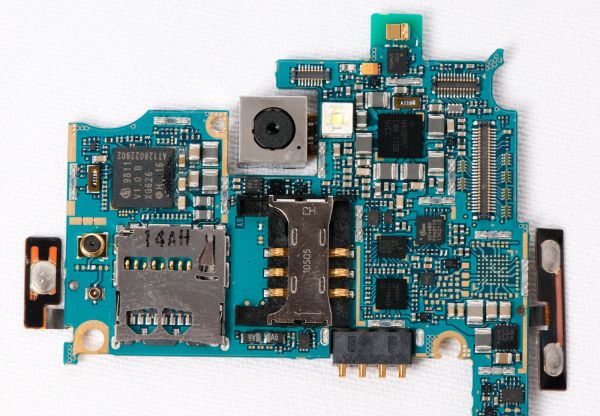 The EMI cans thankfully snap off easily, and underneath we can see right next to the microSD card slot is the Infineon/Intel X-Gold 626 HSPA+ (HSDPA Cat. 14 - 21 Mbps / HSUPA Cat. 7 11.5 Mbps) baseband. 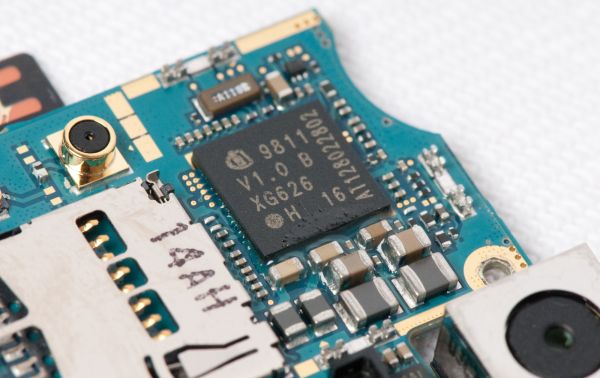 On the opposite side is the Audience 1026 noise cancelation IC, MAX8997 PMIC, and Yamaha YMU823 audio codec. 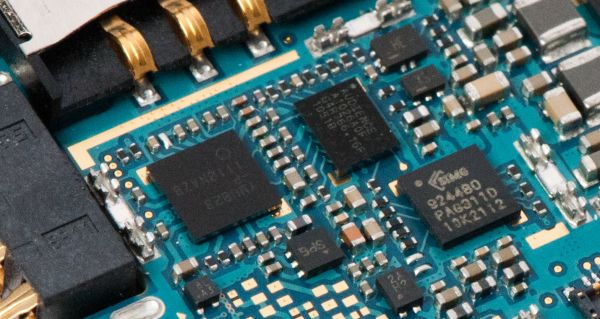 On the same side further down is the GPS that SGS2 uses, which is a SiRF GSD4T GPS. That particular die is absolutely tiny and difficult to photograph. More on the SGS2 GPS in a moment, however. 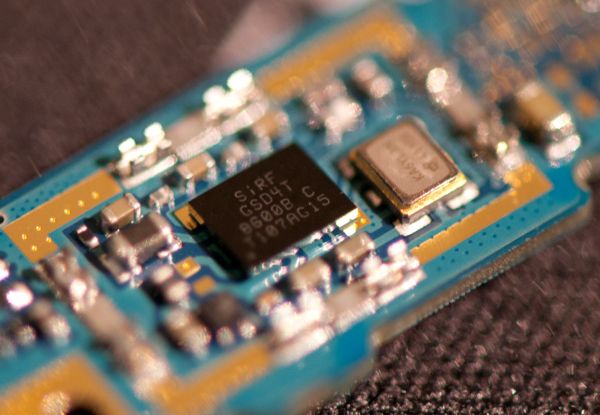 The other side of the PCB is much more interesting.

With the cans off, first we get a shot of Exynos 4210 with its PoP memory. This particular part has two mobile LPDDR2 die in the stack. Next to it, a Samsung combo NAND + DRAM part, with 16 GB of NAND and 64 MB of RAM, no doubt for the Infineon baseband. 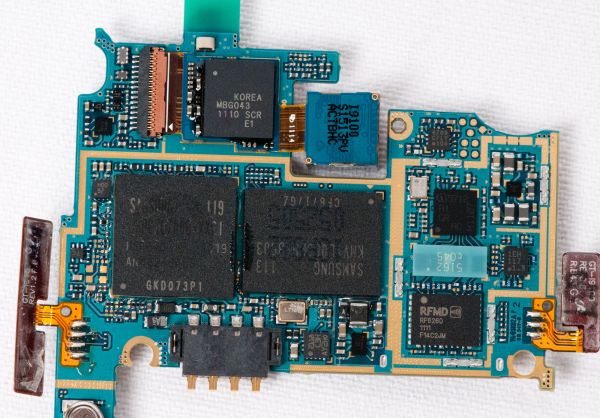 Moving right is the Infineon Smarti UE2 RF transciever marked 5712, and the large IC below that marked RFMD RF6260 is a quad-band multi mode power amp which is a bit interesting. It works between 1710 and 1980 MHz, and 824–915 MHz, supplanting somewhat the need for individual power amps for each band. 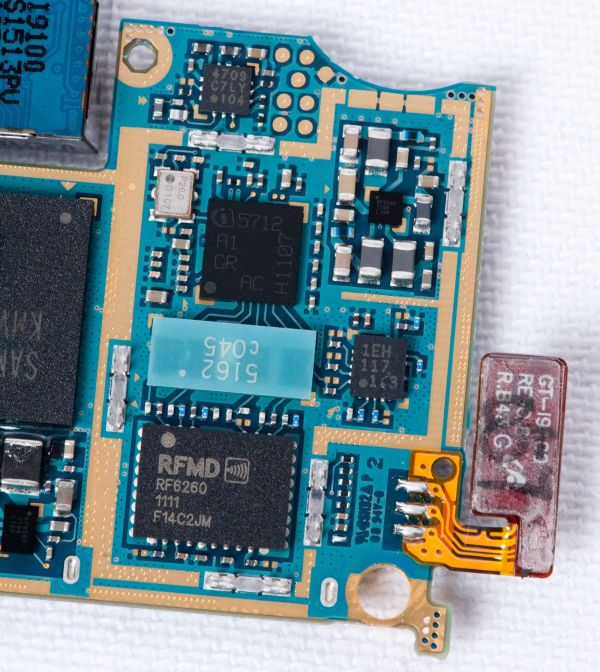 Down on the long and skinny part of the PCB is a large package which I believe probably houses the BCM4330 WLAN module (more on that later), and next to it is a button cell battery, which seems curious. 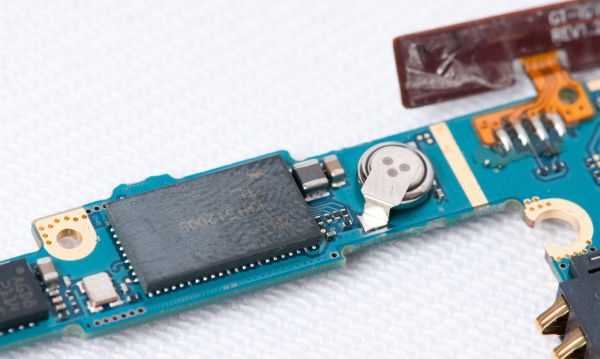 Now remember that camera part I mentioned earlier? Well, at the top of the board you can see a ZIF slot, a relatively large IC< and then the camera module. 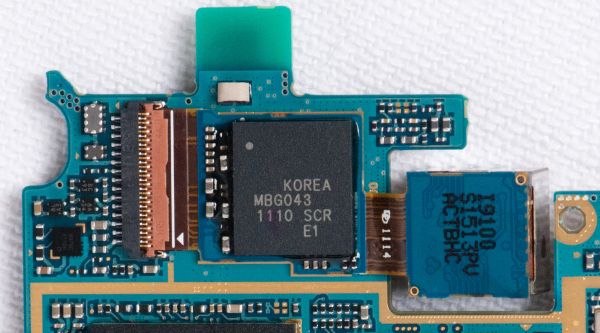 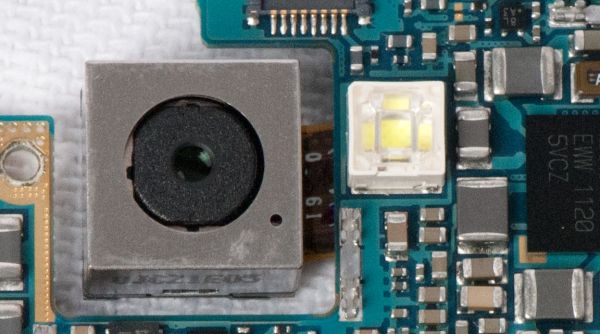 Compare these two, and it seems pretty obvious that this is exactly that same camera module from earlier, and most likely the large IC with Korea written on it is the Fujitsu M5MO ISP which controls it.

Also up at the very top is another gold connector which meets up with the SGS2’s third antenna, whose purpose is either for WLAN/GPS or another Rx finger for the cellular baseband. 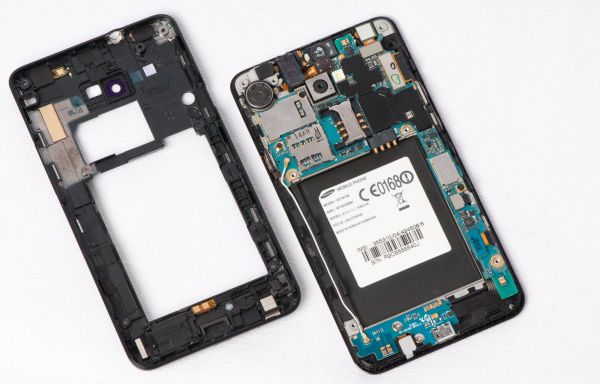 The circular thing with a foam backside is the SGS2’s vibration motor, and other than that there really isn’t much more to talk about. Heat gets carried away from ICs through the EMI cans which double as heatsinks, and on the backside of the plastic back you can see a metal region and small thermal pad.