What about Wired Ethernet?

So far, we’ve skipped discussion of wired Ethernet performance. There are two major reasons for this. First, if you’re interested in wireless performance, it’s probably because you don’t want to bother running wires around your house/office, so regardless of how fast Ethernet might be, it’s probably not something you want. The second reason for not including Ethernet is that Gigabit Ethernet is so much faster than even the best current wireless solutions that it tends to make the charts hard to read. But let’s just see how Ethernet—both 100Mbit and 1000Mbit—stacks up against our best-case results from earlier. We’ve pulled the best results for all of the other wireless cards from either router, so we’re using the Netgear results or the Linksys results as appropriate. Even with that advantage, there are many tests where Ethernet still stomps all over wireless. 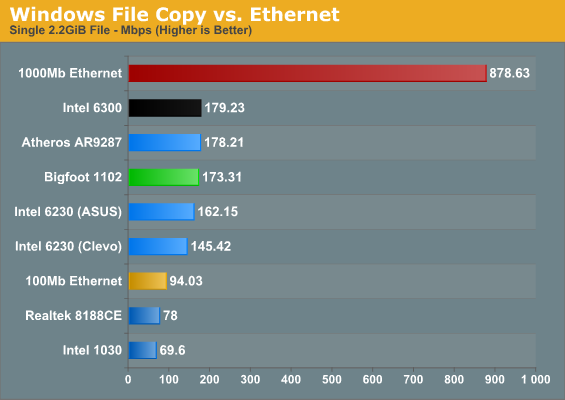 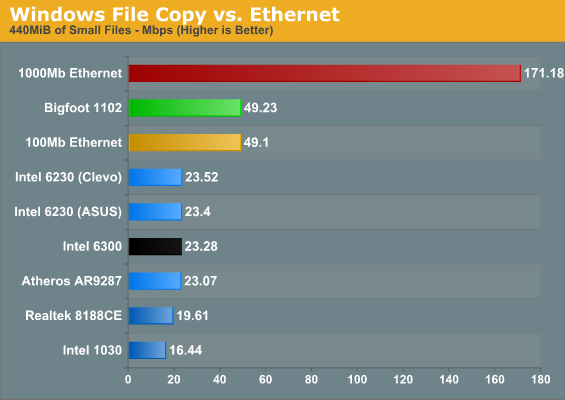 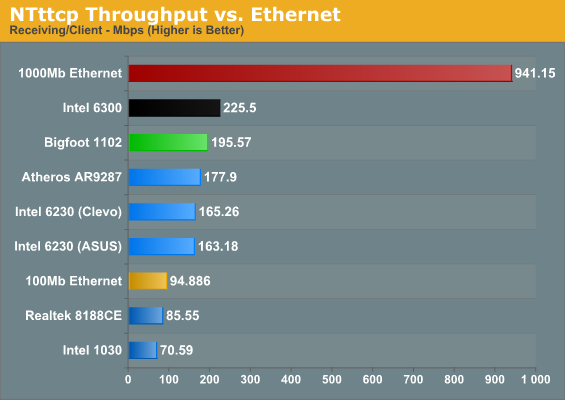 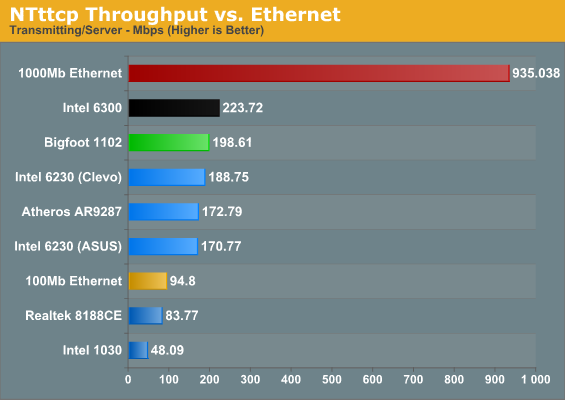 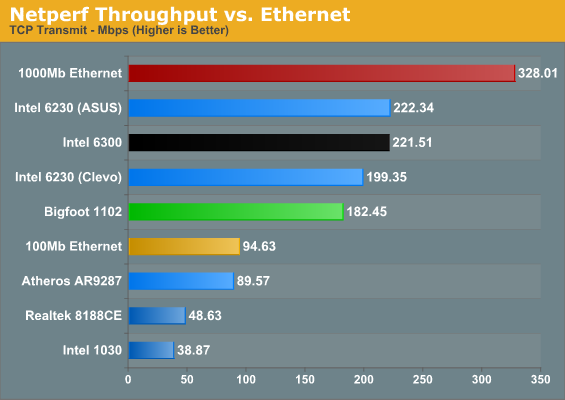 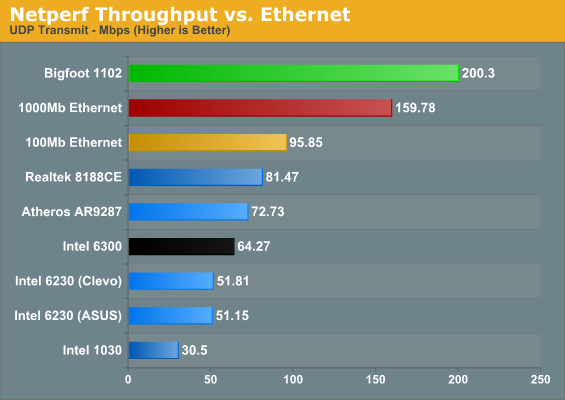 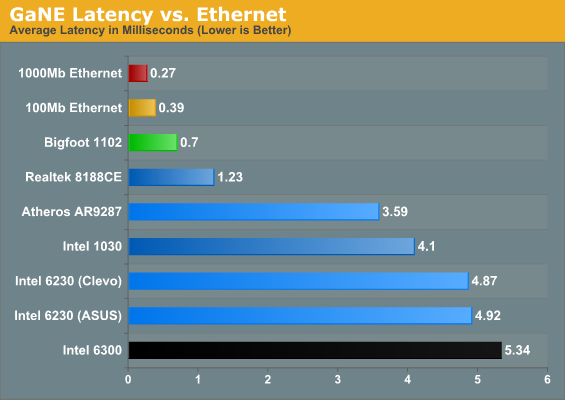 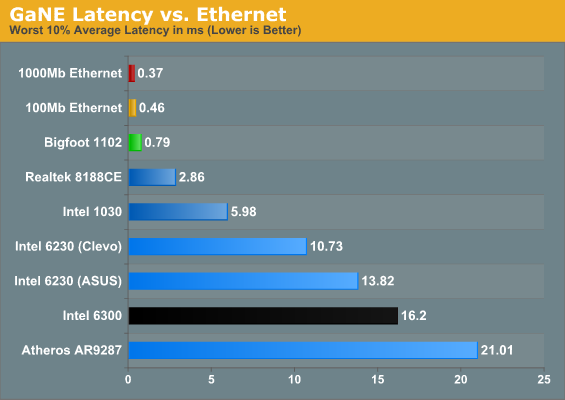 The first area where a wired connection is clearly superior is in latency—even 100Mbit Ethernet trumps the Bigfoot 1102, and that translates into a virtual tie for copying lots of small files. Gigabit Ethernet runs away from everything else, but that’s expected. It’s about an order of magnitude faster than the lesser wireless adapters, and even the Bigfoot and Intel 6300 can’t come close to the bandwidth and latency a wired connection provides. The GbE connection is 3.5 times faster than the Bigfoot for copying lots of small files, and in bandwidth limited situations it ends up being roughly five times as fast. The only test where GbE falls short is in our Netperf UDP result, but I’m still not entirely comfortable with the Netperf figures.

In short, you can pry my Gigabit Ethernet from my cold, dead hands—but then, I routinely install nearly 100GB worth of data over a wired connection for each laptop I test, and that’s not something most users need. For any laptops castrated by the inclusion of 100Mb Ethernet (Toshiba, I’m looking at you!), a good 802.11n card can actually offer a better overall experience. Of course, you’ll also need to consider your choice of router in some situations—I demand Gigabit Ethernet support for instance, and after using a 5GHz capable router I’m ready to upgrade.

Something else you don’t immediately get from the charts is the ease of setup: for Ethernet, you plug in the cable and you get your 100Mb or 1000Mb connection; there’s no fussing about or worries of Interference. Longer cables can increase latency slightly, and if you bounce through several switches you can end up with 3-5ms of latency, but throughput is still much faster than any 802.11n network. Wireless networking also tends to need more overhead for error checking and interference losses, and there’s a question of whether the streams are linearly independent enough to get higher throughput, orientation, directionality of signal, etc. Even though you might connect at 450Mbps or 300Mbps, you’ll never actually reach anywhere near that level of throughput. In our testing, the highest throughput we ever saw was around 75% utilization of the available bandwidth, and that was on a 300Mbps connection. For the 450Mbps Intel 6300, we actually topped out at just 50% utilization. By comparison, 100Mb Ethernet reached up to 96% utilization and 1Gb was only slightly lower at 94% utilization. (Note that a better router could improve the situation, as Brian managed up to 300Mbps throughput in a couple of his tests with the Airport Extreme and a MacBook Pro—though that could also be coming from some Broadcom-to-Broadcom optimizations and/or OS X.)

Another item to mention is that if you use switched Ethernet, you also get a true 100Mb/1Gb connection even when there are multiple computers accessing the network, and it’s a full duplex connection so you can send and receive at up to 1000Mb if needed. Try accessing a lot of data over a wireless network from two different laptops and you’ll find performance tanks. We did some quick testing and found that NTttcp throughput with both the Bigfoot and 6300 pulling data resulted in some ugliness. The Bigfoot plugged happily along at 100-120Mbps—slower than when it was the sole network device, but still acceptable. The 6300 in contrast dropped to around 60-80Mbps, about one third of what it was pulling when there wasn’t other traffic. If that wasn’t bad enough, doing the same test with the Bigfoot 1102 and an Intel 6230 laptop left the 6230 laptop starved for data, hovering around 2-3Mbps when the Bigfoot adapter was sending/receiving data, so the extra spatial stream appears to help the 6300. For typical network traffic, it may not matter much, but if you have a lot of laptops accessing large amounts of data, interference is definitely something you need to address. Go wired on the other hand and you don’t have nearly as much trouble (other than running wires everywhere).