The Optional 1.8GHz Core i7

In the usual Apply fashion, in order to get the faster CPU options you have to buy the more expensive default configuration. That means the $999 11-inch MacBook Air can't be upgraded to a faster CPU at order, while the $1199 version can. The same goes for the $1299 13-inch model, you need the $1599 configuration for that. 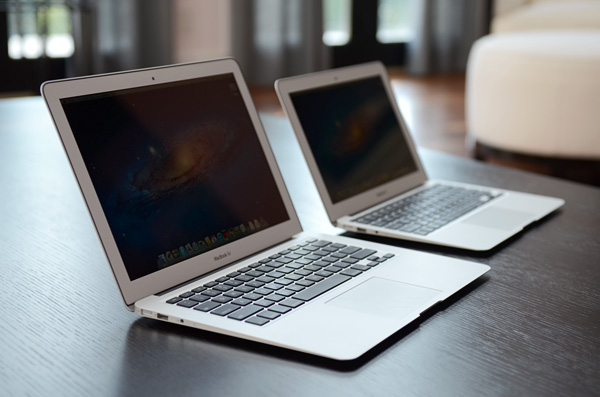 If you're buying the 11, I'd say it's worth while to get the 1.8GHz option. There's a big enough performance difference between the base 13 and base 11 that the CPU upgrade makes sense.

I didn't have a 1.8GHz system on hand but luckily I knew someone who did. Mark Rein is VP of Epic Games and happens to live a few minutes from my house. Mark also happened to be driving down to the Apple store on Friday to pick up a fully optioned (the only way Mark rolls) 13-inch MacBook Air with a 1.8GHz Core i7. I hitched a ride with him and borrowed his system for a couple of benchmark runs.

Let's look at the clock speed differences between the parts:

With only a single heavy thread active the i7 is nearly 30% faster than the 1.6GHz Core i5 found in the 11-inch MacBook Air. The advantage over the 1.7GHz Core i5 is only 8.3% however.

Crank up the threads and the performance advantage drops a bit over the 1.6GHz Core i5 but we're still talking about a nearly 27% advantage here. The i7 is still only around 8% faster than the 1.7GHz part.

Cinebench R11.5 shows the biggest gain over the 1.7GHz Core i5 at 11.8%. Heavier workloads will make better use of the extra cache on the i7.

Overall the performance gains aren't super huge over the 13's 1.7GHz Core i5, however if you care about performance the upgrade is worth it for the 11-inch MacBook Air. Unfortunately I didn't have an upgraded 11-inch system on hand to get a good idea of the impact on battery life. In idle workloads I wouldn't expect a huge drop in battery life, but under load we could see the 11 take a hit.