Anand has provided our coverage of Llano’s architecture and he’ll have a preview of desktop performance, but he’s leaving the mobile coverage to me (Jarred). At a high level, the breakdown of Llano is really quite simple: take a K10.5 series CPU core (dual- or quad-core), pair it up with a DX11 capable GPU core similar to AMD’s Redwood line (5600/5600M or 6500M), and then mix in power gating and Turbo Core; bake everything in a 32nm process and you’ve got Llano. Easier said than done, of course, as K10.5 parts previously used a 45nm process while Redwood used 40nm, so AMD had plenty of work to do before they could realize the simplistic overview I just described; the result is what matters, though, so let’s break out our spoons and see how the pudding tastes. Here’s the overview of the mobile A-series APUs launching today.

There are two different power envelopes for Llano right now: 35W and 45W. The former models end with an M while the latter end in MX. Don’t let the relatively high TDPs fool you, as similar to Intel we’re looking at maximum TDP while idle and low-load TDP will be far lower. Based on battery life, it appears that the entire test notebook consumes around 7.42W at idle. By comparison, a slightly larger dual-core SNB notebook consumes around 7.68W when idle, so we’re very close to parity at idle. As noted earlier, all APU models come with 1MB L2 cache per core, and Turbo Core allows for cores to clock up to higher values under the right circumstances. That could prove important, as clock-for-clock K10.5 cores can’t hope to keep up with Sandy Bridge, and Sandy Bridge parts are already clocking significantly higher.

On the CPU side of the equation, there are currently only dual-core and quad-core parts, so tri-core appears dead (or at least MIA for now). The other part of the APU is the GPU cores, and here there are three options. The A6 and A8 APUs are both quad-core, but A6 has 320 Radeon cores clocked at 400MHz compared to 400 cores at 444MHz—so the 6620G is potentially 40% faster. A4 APUs trim the GPU further, with 240 cores clocked at 444MHz, and they’re the dual-core parts. The 6620G could be up to 67% faster than 6480G, under the right circumstances. As Anand mentioned, right now all of the A-series APUs are coming from the “big Llano” die, but in the future we’ll see the A4 production shift to “little Llano” instead of using harvested die. 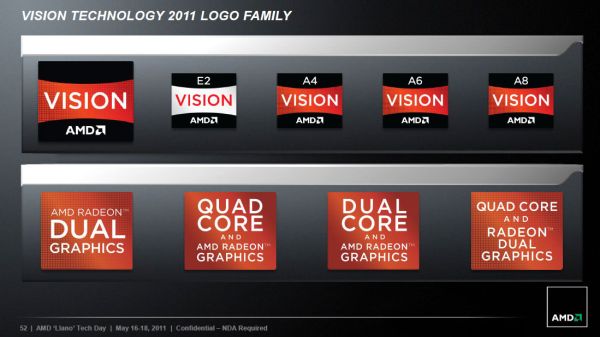 For 2011, AMD is simplifying their Vision branding with Llano, skipping the Premium, Ultimate, and Black modifiers and instead referring to the APU. Vision E2 refers to the dual-core E-series APUs, while the A4, A6, and A8 lines correlate directly with the A-series APUs. The Radeon brand continues as an important asset, so there will be sticker options to promote quad-core and dual-core CPUs with Radeon graphics. What about the Dual Graphics, though? 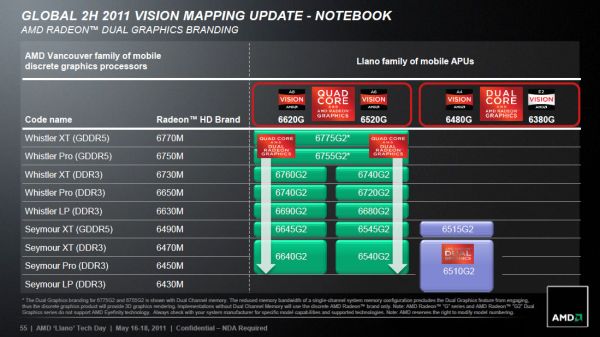 With the integrated GPU finally able to approach the performance of midrange mobile GPUs, AMD is making a return to hybrid CrossFire (IGP and a dGPU working together), though the official name is now apparently “Radeon Dual Graphics” or just "Dual Graphics"; we’ve also heard it referred to as “Asymmetrical CrossFire”, and we’ll use any of these terms throughout this article.

We first saw an attempt at hybrid CrossFire with the HD 2400 and the 790 chipset, and later that extended to HD 3400 cards, but it never really impressed as it was limited to desktops and you could still get far better performance by spending an extra $10 to upgrade from a 3400 to a 3600 dGPU. The 6620G fGPU is several times more powerful than the old HD 4250 IGP, making CrossFire potential useful, especially on laptops where the power savings from shutting off the dGPU are very significant.

With Radeon Dual Graphics, AMD introduces more brands. The various Fusion GPUs (fGPUs) only work in CrossFire with specific discrete GPUs (dGPUs)—nearly all of the 6400M, 6600M, and 6700M line are eligible—giving rise to several new Radeon names. If you start with a base of a Radeon HD 6620G and add a Radeon HD 6770M to it, the resulting combination is now called a Radeon HD 6775G2. Pair it with a 6750M and you get a 6755G2. The entirety of the list is depicted in the slide from above. For now these names are just going to be listed on the notebook spec sheet, the drivers themselves will report the actual GPU you have driving the panel you're connected to. AMD is still working out the right way to expose these names through software to avoid confusion.