In the previous section, I mentioned about the bitrate limitations of the GT 430 when decoding 1080p H264 clips. NVIDIA confirmed that the GT 430 couldn't decode 60 fps videos at 80 Mbps. This piqued my curiosity and I tried out a few experiments to find out whether bitrate limitations exist for the usual 1080p24 videos on both the GT 430 and GT 520.

The DXVA Checker benchmark was repeated for all the bitrate testing files found in the NMT test files upto 110 Mbps. 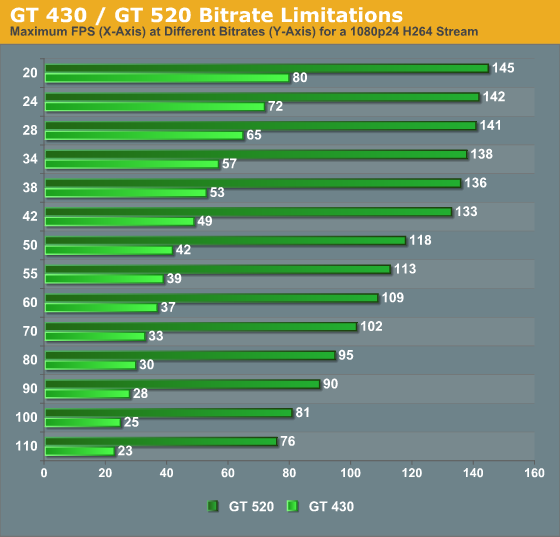 We also created our own suite of bitrate testing streams at 1080p60. Running them through the DXVA Checker benchmark yielded the following results. 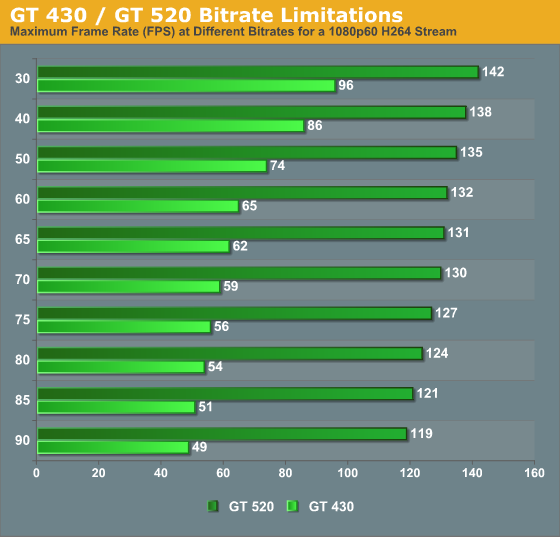 The results are presented in a bar chart above (A line chart would have made much more sense, but the outer values get placed only for bar charts in our graphing engine). For 1080p24 streams, we find that the GT 430 is unable to keep up with the real time decode frame rate requirements at 110 Mbps. For 1080p60 streams, the limit gets further reduced to somewhere between 65 and 70 Mbps. The GT 520 has no such issues.

The above testing is only of academic interest, since there is no real 1080p24 content at 110 Mbps. Even 3D Blu-rays max out around 60 Mbps (and that includes the audio stream!), so users shouldn't really be concerned about this bitrate limitation of the GT 430.

The GT 520's scores above are more interesting. Even the high end GPUs such as the 460 and 560 are unable to achieve that frame rate. The answer was buried in the README for the latest Linux drivers. The GT 520 is the first (and only GPU as of now) to support the VDPAU Feature Set D.

We asked NVIDIA about the changes in the new VDPAU feature set and what it meant for Windows users. They indicated that the new VPU was a faster version, also capable of decoding 4K x 2K videos. This means that the existing dual stream acceleration for 1080p videos has now been bumped up to quad stream acceleration.

Though the GPU can decode 4K videos, it is unfortunately not able to output it through HDMI. Despite the HDMI controller being advertised as HDMI 1.4a, it doesn't implement the 4K x 2K resolution part of the standard. The lack of HDMI sinks which accept that resolution is another matter, but that should get resolved in the next few years.

Despite the GT 520's advanced VPU engine, the lack of shaders limits its post processing capabilities. With all post processing options enabled, the GT 520's GPU load was always between 60 and 80%. The memory controller load (DRAM bandwidth usage) was between 20 and 40%. Despite the headroom apparently available, NVIDIA indicated that there weren't enough shaders available to implement the more advanced deinterlacing algorithms.