There's also been some confusion about HSPA+ support on the Veer. The issue stems from an assumption that 64QAM support is mandatory for a device to be 3GPP Release 7, which is absolutely not the case. Ironically, I left a lengthy comment explaining why that's the case in the HTC Inspire 4G HSUPA update story before all of this suddenly became an issue.

The long and short of it is that if a modem supports any 3GPP Release 7 features, it's a 3GPP Release 7 device, and thus 'HSPA+,' which is merely a colloquial label for enhancements added in Release 7. The reality is that none of the features in any release but the original WCDMA 3GPP release are mandatory, everything in each release since then is optional. Thus, features added in 3GPP Release 7 are optional - you don't have to implement every new feature to be able to call your modem HSPA+. Features supported by Qualcomm's MSM7230 inside the HP Veer that are from 3GPP Release 7 include UE DTX/DRX (discontinuous uplink transmission and receive), F-DPCH, and others. Qualcomm's MSM7230 and other current generation WCDMA SoCs include QPSK and 16QAM modulation on the downlink, meaning they are HSDPA 14.4 Category 10 devices. Downlink support for 64QAM will come in the next refresh.

As of right now, to my knowledge the first shipping phone with 64QAM support was the Samsung Galaxy S 4G which includes an ST Ericsson THOR 5730 HSDPA 21 Mbps HSPA+ modem. Though 64QAM offers potentially faster speeds and better spectral efficiency, it requires accordingly better SNR than 16QAM and substantially more than QPSK, and as a result isn't used unless user equipment is close to the cell center. This behavior is easily measurable on devices like the Galaxy S 4G, whose engineering menus show a percentage breakdown of what frames were modulated using QPSK, 16QAM, and 64QAM. I've been working on performing extensive drive testing with that particular device to explore just this issue for some time now.

Further, the enhancements added in HSPA+ / 3GPP Release 7 cover far more than just the standalone addition of  64QAM. Release 7 adds HSDPA categories which include MIMO but exclude 64QAM support in addition to categories that exclude MIMO but include 64QAM. On the uplink it also includes 16QAM support which could enable upstream speeds of up to 11.5 Mbps. Other major features added are faster call setup and takedown, and reduced cellular signaling to alleviate some of the call and data session blocking issues which have affected a number of UMTS networks. The point of all this is that it's a grossly innacurate oversimplification to claim something is or isn't HSPA+ based on absence of 64QAM on the downlink.

The long and short of it is that the HP Veer 4G, HTC Inspire 4G, and Motorola Atrix 4G are all definitely HSPA+ capable with 16QAM HSDPA 14.4 support. As an aside, I'm a bit surprised that this is suddenly an issue now since HSDPA 14.4 (Category 10) devices have been shipping for some time now under the HSPA+ banner to no complaint.

I've already started running endless throughput tests on the Veer 4G and thus far have been decently impressed with speeds. 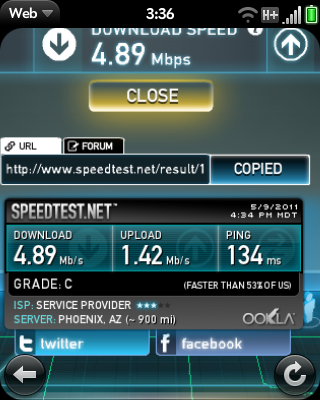 They're right around what I'm used to seeing in my market, which AT&T has enabled HSPA+ support in. I've verified this using AT commands on a Sierra Wireless 308 AirCard. Speeds closer to the theoretical maximum for the UE category will only come with faster backhaul. AT&T is calling this 'enhanced backhaul' and isn't being totally clear about what cell sites have full support yet, though I'm told internally the list of sites that are upgraded with faster backhaul is quite short at the moment.